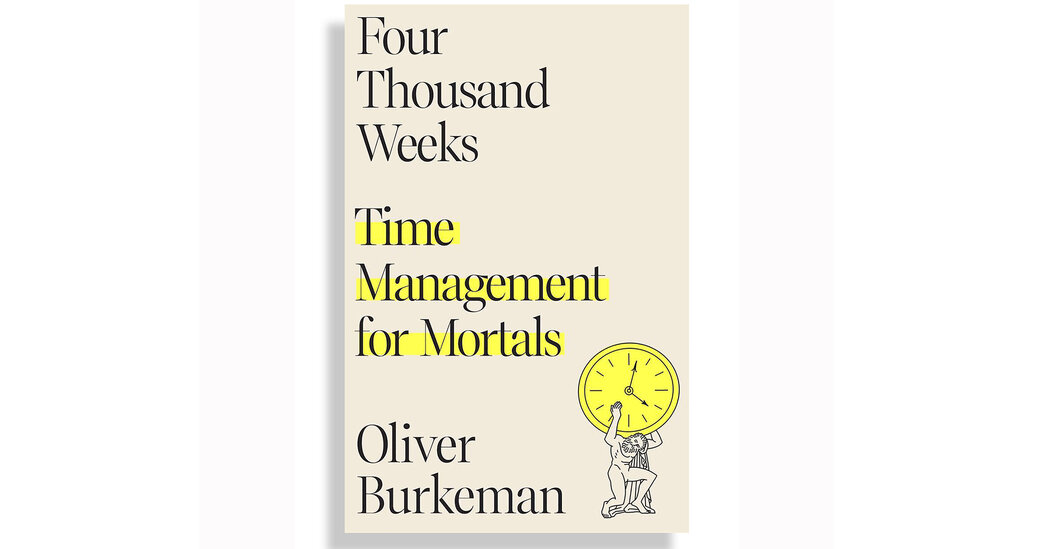 Early in the book, we revisit the era of medieval farmers, who, Burkeman says, didn’t even think of or experience time as “an abstract entity — as a thing.” Nature and necessity provided a rhythm for days and tasks, and they simply followed that rhythm. But then somewhere along the line (hashtag capitalism?) “time became a thing that you used,” a resource that you could feel bad about mishandling. Burkeman wants to “prompt us to question the very idea that time is something you use in the first place.” (He enjoys italics.)

One of the ways to do this is to exercise a Buddhist-like detachment and acceptance. “The world is already broken,” Burkeman writes, and so is the possibility of your making the most of your time. In the face of the tyranny of choice, you can find freedom (and presumably stress relief) in understanding that “you’re guaranteed to miss out on almost every experience the world has to offer.”

He lost me a little when he wrote about time being a “network good,” something that’s best optimized among groups of people in order to “socialize, go on dates, raise children, launch businesses, build political movements, make technological advances” — but that’s only because, aside from socializing, I don’t really want to do any of those things.

No contemporary guide to time management can ignore the need to ignore our phones, and Burkeman pauses to acknowledge the attention plague. After describing his use of Twitter, he says he’s “now in recovery.” (In addition to Twitter, I’ve spent a not insignificant portion of the prime of my life playing various anagram games on my phone. You?)

In the end, some of Burkeman’s advice (“focus on one big project at a time,” “keep a ‘done list’”) seems disappointingly traditional, given how good he is at puncturing his genre’s pieties. As another example, he is withering on one page about the mindfulness mandate to “be here now.” (“It’s like trying too hard to fall asleep, and therefore failing.”) Then, near the book’s end, he counsels us to “pay more attention to every moment, however mundane.”

But part of the pleasure of reading Burkeman is that you assume he would happily point out these same reversals and contradictions. His tone is not confident or hectoring; he’s in the same leaky boat we’re in, just trying to stop things up where he can.

Despite my airport habits, there are things I want to accomplish in this life. And some of Burkeman’s modest suggestions about how to prioritize things, without simply adding stress about prioritizing things to life, seem well worth trying. And in addition to whatever help it might offer, “Four Thousand Weeks” is also just good company; it addresses large, even existential, issues with a sense of humor and an even-keeled perspective. I found that reading it — Burkeman might balk at this particular way of describing it — was a good use of my time.