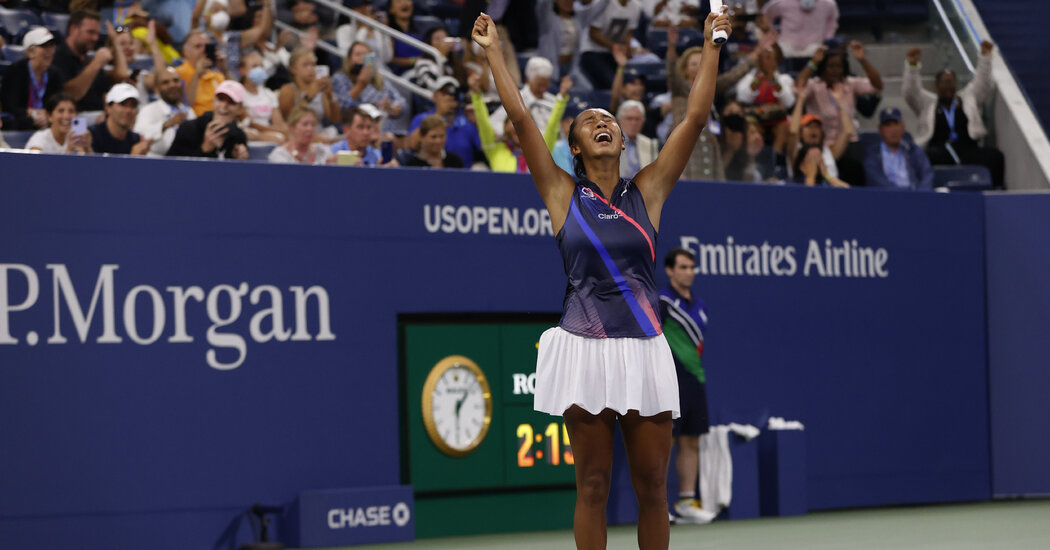 Less than a week ago, few casual tennis fans knew even a little, if anything, about Leylah Fernandez. When she stunned Naomi Osaka in the third round of the U.S. Open, many were more focused on the player who lost than on the player who won.

Those same people wondered if the precocious teenager from Canada had benefited from Osaka’s poor form that night.

But after storming back to beat the more dependable and in-form Angelique Kerber in the fourth round on Sunday, Fernandez — with her natural exuberance, ubiquitous smile and fist raised high in the air — has become the sensation of the this year’s Open.

“I think she can go really far in the next few years,” Kerber said after the match.

There is a chance she could go really far in just the next few days. Fernandez is playing the best tennis of her young career, blasting forehand winners and exuding the kind of joyous fighting spirit and confidence that has captivated New York fans during a wild three-day run.

With a raucous crowd packed into Louis Armstrong Stadium chanting her name, Fernandez lost the first set on Sunday and was down a service break in the second before she outlasted Kerber, 4-6, 7-6 (5), 6-2, less than 12 hours before turning 19.

She was delighted. She was proud. She raised her arms in the air and flashed her magnetic smile. But don’t think that she is shocked by her own success, even if the rest of the tennis world is.

“I expected that one day my tennis game is going to come through and that I’m going to be on the big stage in front of a big crowd playing against big players, and also getting the wins,” she said. “I’m not surprised of anything that’s happening right now.”

Fernandez, the latest Canadian to burst onto the scene, said she would celebrate her win with her family and her fitness coach, Duglas Cordero, at the same Italian restaurant they have dined at every night of the tournament. Her birthday celebration on Monday will include a third-round doubles match alongside Erin Routliffe of New Zealand.

But while she looks ahead, Fernandez can also reflect on this: While she was still just 18, she took down Osaka, the No. 3 seed and defending champion, and Kerber, the No. 16 seed and 2016 U.S. Open champion, all in less than 48 hours. Together, those two champions own seven major titles (Osaka has four), but for the left-handed Fernandez, they were just two players who required unique tactical approaches.

“The biggest difference is that one is a left-hander, and the other one is a right-handed player,” she said. “I just approached the matches the same.”

Now she must toggle back to another right-hander. Fernandez’s opponent in the quarterfinal stage is No. 5 Elina Svitolina, who had no trouble dispatching No. 12 Simona Halep, 6-3, 6-3, in 76 minutes in Arthur Ashe Stadium on Sunday.

Fernandez, who was born and grew up in Montreal, became the first Canadian into the quarterfinal stage this year. No. 6 Bianca Andreescu, from Toronto and the 2019 champion, will play No. 17 Maria Sakkari of Greece in the fourth round Monday night.

But even as the stakes steadily increase, Fernandez has shown no fear on court during her march into the second week of what is arguably the biggest tennis tournament of them all. Perhaps it is because she is too young to know any better.

Trailing by a set and down a break in the second, Fernandez flipped the momentum of the match on its head when she broke back to make it 4-4, taking the ball out of the air and ripping a backhand cross-court winner. Up went her fist and the fans erupted.

In the tiebreaker, Fernandez went ahead 5-1 and the fans, who were streaming into the stadium as word spread that she was putting up another good fight, began chanting, “Let’s Go Ley-lah,” as if she were De-rek Je-ter.

Kerber fought back to make it 5-4, but then Fernandez reached for a Kerber serve out wide and ripped a forehand winner down the line from outside the court back into it — a shot so precise, so powerful and so bold that it elicited a racket clap of appreciation from Kerber.

Two points later, Fernandez forced Kerber so far wide that she could not get the ball back safely into the court. Again, Fernandez’s arms went up in celebration and the fans roared their approval. Fernandez carried the momentum into the third set, where she finished the job.

When she won the final point, the audience exploded and jumped to their feet as one with a deafening cheer for their newly-adopted favorite young star-in-the-making.

“I was just enjoying every moment of it,” Fernandez said. “Honestly, the crowd has been amazing, so thanks to them I was able to win.”

But she is not the only teenager making a mark at this year’s event. Carlos Alcaraz of Spain, 18, upset No. 3 Stefanos Tsitsipas and then beat Germany’s Peter Gojowczyk, 5-7, 6-1, 5-7, 6-2, 6-0, on Sunday to reach a quarterfinal. Also, the British 18-year-old Emma Raducanu will play Shelby Rogers in the fourth round on Monday.

Fernandez said she remembered the first time she saw Alcaraz in the junior circuit and thought she was watching the reincarnation of a right-handed Rafael Nadal.

“Seeing all these teenagers, these youngsters doing so great at the U.S. Open and the other tournaments, too, is eye-opening,” she said.

She called herself a “happy-go-lucky” kid who has always found joy in whatever she does. The fans have fed off that energy, and she has fed off theirs. Perhaps one day, after many years on the tour, when she is 33 like Kerber, she will lose some of her youthful glee.

What Fernandez enjoys now is a special, singular feeling, one that Kerber remembers well, and said is almost impossible to recapture.