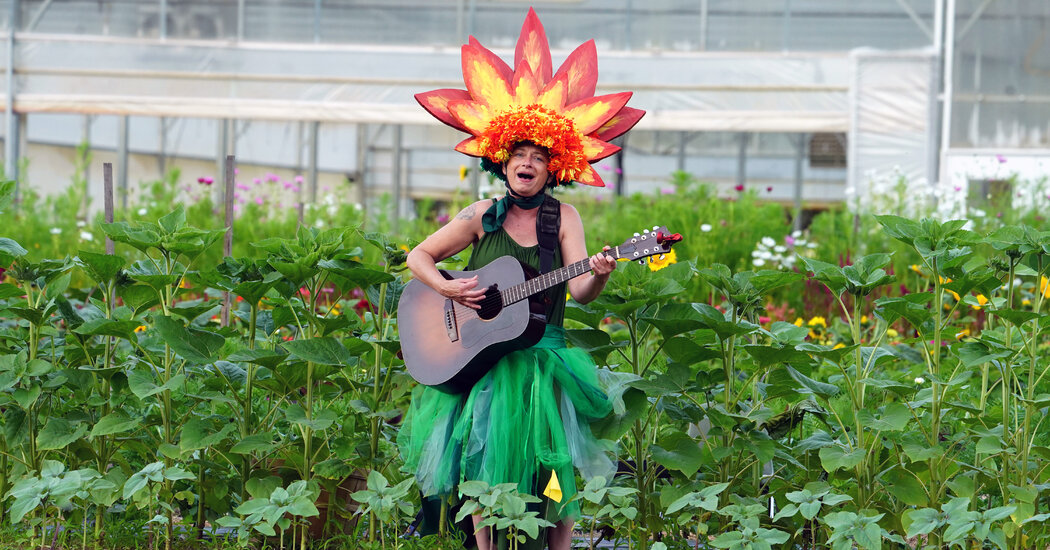 At the farm, which recently finished a run of a site-specific play about climate change, the boundless stage includes a courtyard lined with hydrangeas, greenhouses and a field of flowers. Over four nights last week, audience members trekked the outdoors there, walking from scene to scene, as the actors, musicians and stilt walkers performed in vibrant, whimsical costumes.

The performance is the second installment of a decade-long series, “Dream on the Farm,” in which the Farm Arts Collective, whose home is on the 30 acres, plans to produce one play a year centered on climate change.

“This is an intense and troubled time and as an organic farmer and theater maker, we’ve got to keep making work about this issue,” said Tannis Kowalchuk, the ensemble’s artistic director, who started the farm — which sits just across the river from New York — with her husband, Greg Swartz. (They sell their wares at the Union Square and Grand Army Plaza farmers’ markets.)

This year’s play transported guests into an “Alice in Wonderland”-esque fantasy in which two scientists, the astronomer Carl Sagan and the biologist Lynn Margulis, are brought back from the dead to help save life on Earth from the climate disaster. Audience members watch as Sagan encounters eccentric characters representing the atmosphere and the hydrosphere, as well as a man trying to find a way to escape the planet through space travel. The rest of the group followed the Margulis character on the other side of the farm. (The audience was split into two to avoid overcrowding.)

At the end of the show, the audience of about 80 people received chilled cucumber soup made from ingredients grown on the land.

But the reality of the pandemic burst the fantasy bubble on Sunday after one of the people in the accompanying band tested positive for the coronavirus, despite having been vaccinated, and the arts collective decided to cancel the fifth and final performance.

Kowalchuk said she hopes the play will be performed again, though. She has imagined bringing it to New York City, where the ensemble might be able to find a new stage in a park or botanical garden.