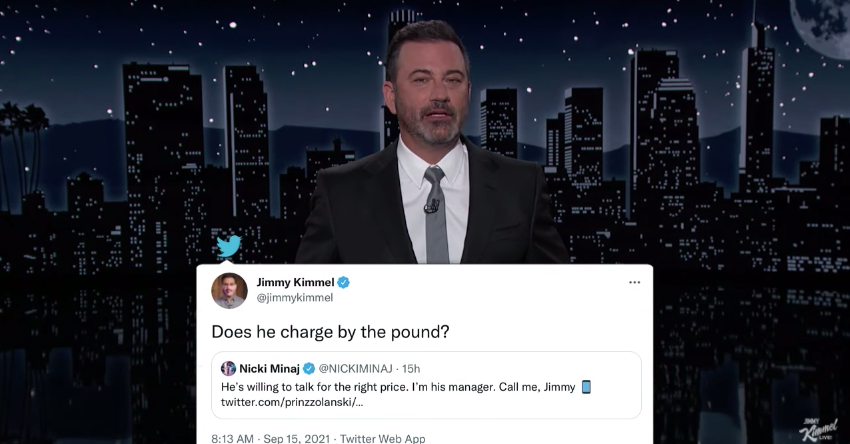 On Tuesday’s late-night shows, Nicki Minaj’s tweets about her cousin’s friend in Trinidad who she said got swollen testicles after receiving the Covid vaccine were a hot topic.

On Wednesday, the rapper responded to the hosts who had poked fun, including Jimmy Kimmel, who asked to be connected with the afflicted man, saying he had questions.

“And I guess Nicki saw it, because she reached out on Twitter,” Kimmel said. “She wrote: ‘He’s willing to talk for the right price. I’m his manager. Call me, Jimmy.’ Which was exciting. Don’t have Nicki’s number, and I do want to get an idea of what kind of money we’re talking about, so I wrote back, ‘Does he charge by the pound?’”

“Nicki, for the record, I ‘rlly’ like you, too,” Colbert said on Wednesday. “That’s why I want you to get vaccinated so you can come on the show again, because without a shot, the network ‘rlly’ won’t let you come on.”

“The race was called for Newsom less than an hour after the polls closed. Less than an hour. Amazing how fast an election can end when Rudy Giuliani isn’t involved, isn’t it?”— JIMMY FALLON

“The election was called so early, Newsom was able to get his beauty sleep, which, by the looks of him, is like 17 hours a day.” — JAMES CORDEN

“In fact, there were three options on the ballot that said ‘yes,’ ‘no’ and ‘This is a bigger waste of time than driving into L.A.X.’” — SETH MEYERS

“A vast majority of Californians voted no on the recall. So many people marked no, it was like the R.S.V.P.s for a destination wedding.” — JIMMY FALLON

What We’re Excited About on Thursday Night

Seth Meyers will host the cast of “Brooklyn Nine-Nine” for the last time on Thursday’s “Late Night.”