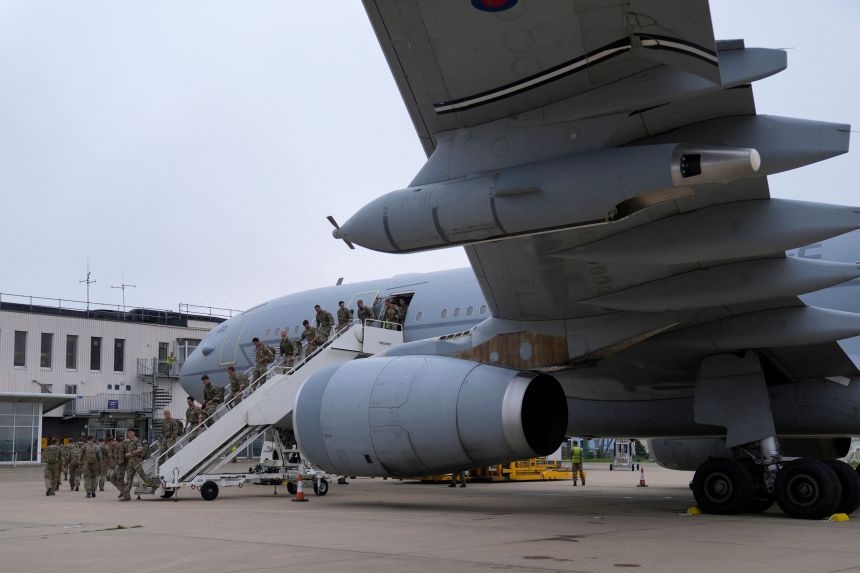 LONDON (REUTERS) – The last British flight evacuating civilians from Afghanistan has left Kabul, bringing to an end an operation that has airlifted almost 15,000 Afghan and British citizens in the two weeks since the Taleban took control. Britain’s armed forces are now preparing to leave and will take small numbers of Afghan citizens with them on remaining flights this weekend, a defence ministry spokesperson said on Saturday (Aug 28).

“It’s time to close this phase of the operation down. But we haven’t forgotten the people who still need to leave, and we will do everything we can to help them,” Britain’s ambassador to Afghanistan, Mr Laurie Bristow, said in a statement filmed on the tarmac at Kabul’s main airport.

Some British troops have already departed, and a British military transport plane carrying armed forces members landed at an airbase in southern England on Saturday.

British defence minister Ben Wallace said on Friday that Britain was entering the final hours of its evacuation and would process only people who were already inside Kabul airport.

Britain was at Washington’s side from the start of a US-led invasion of Afghanistan that overthrew the then-ruling Taleban in punishment for harbouring the Al-Qaeda militants behind the Sept 11, 2001 attacks.

More than 450 British armed forces personnel died during two decades of deployment in the country.

Mr Wallace said on Friday that he estimated between 800 and 1,100 Afghans who had worked with Britain and were eligible to leave the country would not make it through.

General Nick Carter, the head of Britain’s armed forces, told the BBC on Saturday that the total would be in the “high hundreds”.

Many Afghans unable to leave judged it was too dangerous to travel to Kabul airport, Gen Carter said.

“People like me… we are forever receiving messages and texts from our Afghan friends that are very distressing. We’re living this in the most painful way,” he added.

Gen Carter, speaking to Sky News, said Britain and its allies might cooperate with the Taleban in future to tackle threats from the Islamic State of Iraq and Syria (ISIS) militant group.

The group, enemies of both Western countries and the Taleban, was responsible for a suicide bombing just outside Kabul airport on Thursday that killed scores of people, including 13 US service members.

“If the Taleban are able to demonstrate that they can behave in the way that a normal government would behave in relation to a terrorist threat, we may well discover that we operate together,” Gen Carter said.

“But we’ve got to wait and see. Certainly some of the stories we get about the way that they (the Taleban) are treating their enemies would mean it would be quite difficult for us to work with them at the moment.”

Prime Minister Boris Johnson discussed the Afghanistan situation with German Chancellor Angela Merkel on Saturday, when the two leaders agreed that the Group of Seven (G-7) rich nations should take a common approach to dealing with any future Taleban government.

“The Prime Minister stressed that any recognition and engagement with the Taleban must be conditional on them allowing safe passage for those who want to leave the country and respecting human rights,” Mr Johnson’s office said.

Join ST’s Telegram channel here and get the latest breaking news delivered to you.