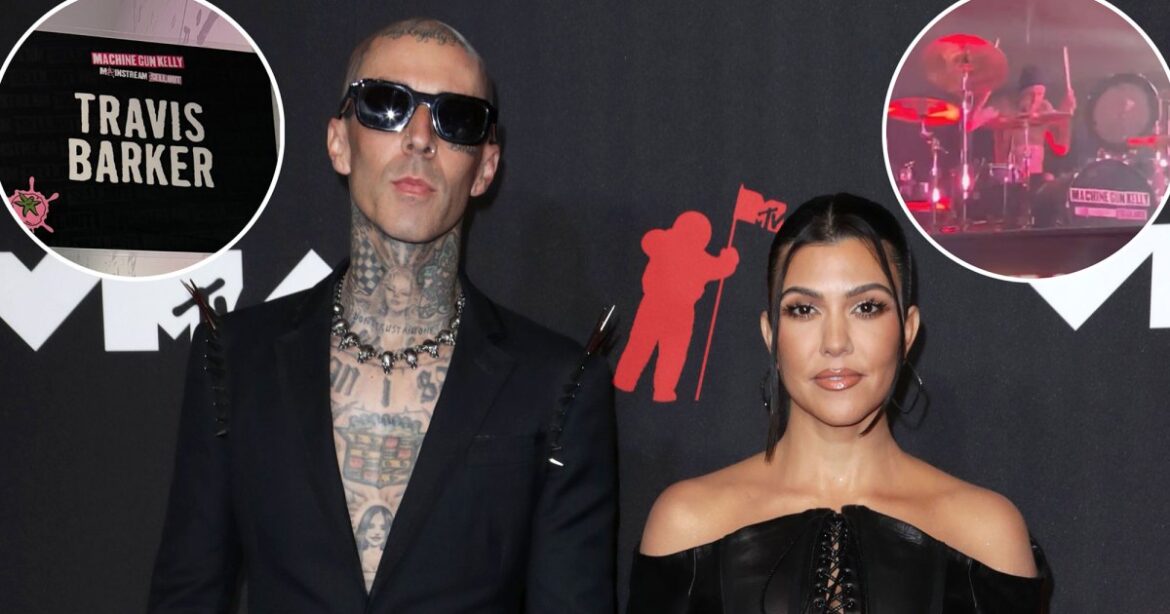 The life of a rocker’s wife! Kourtney Kardashian is accompanying husband Travis Barker on a series of concerts through the Midwest, as the drummer has joined close pal and collaborator Machine Gun Kelly as he wraps up his Mainstream Sellout North American tour. The musician is seemingly defying doctor’s orders following his recent hospitalization for pancreatitis, according to his tour mate.

Kourtney, 43, shared a series of Instagram Stories photos on Thursday, August 11, from MGK’s concert stop the night before in St. Louis, Missouri, followed by snapshots taken on a sunny morning after waking up in the city.

The Kardashians star posted a picture of Travis’ practice drum kit with the show’s set list taped in front of it backstage, his name above the door to his dressing room and video from the concert of fans rocking out to MGK and Travis, who was jamming out so hard. She even included a sweet photo of her kissing her husband in the arena once the show wrapped up.

“Against his doctor’s orders AND with a broken thumb, I convinced @travisbarker to come join us for the last couple days,” MGK, real name Colson Baker, wrote over a Tuesday, August 9, Instagram Story showing a FaceTime session between the two artists. The “Bloody Valentine” singer had three more stops remaining on his North American tour before he heads off to his European leg in September and October, and Travis wasn’t about to miss them!

After St. Louis, the tour heads to Indianapolis and Cleveland, where it will conclude on Saturday August 13. It appears Travis will be his guest drummer for those dates.

The musician was rushed to a Los Angeles hospital on June 28 after contracting a “severe, life-threatening” case of pancreatitis. He spent nearly a week at Cedars-Sinai Medical Center before being released on July 4.

Travis explained his medical crisis to fans in a July 2 Instagram post. “I went in for an endoscopy Monday feeling great. But, after dinner, I developed excruciating pain and have been hospitalized ever since. During the endoscopy, I had a very small polyp removed right in a very sensitive area, usually handled by specialists, which unfortunately damaged a critical pancreatic drainage tube. This resulted in severe, life-threatening pancreatitis,” he revealed.

“I am so very, very grateful that with intensive treatment I am currently much better,” the Blink-182 drummer added.

Scroll down for Kourtney’s photos with Travis on tour.