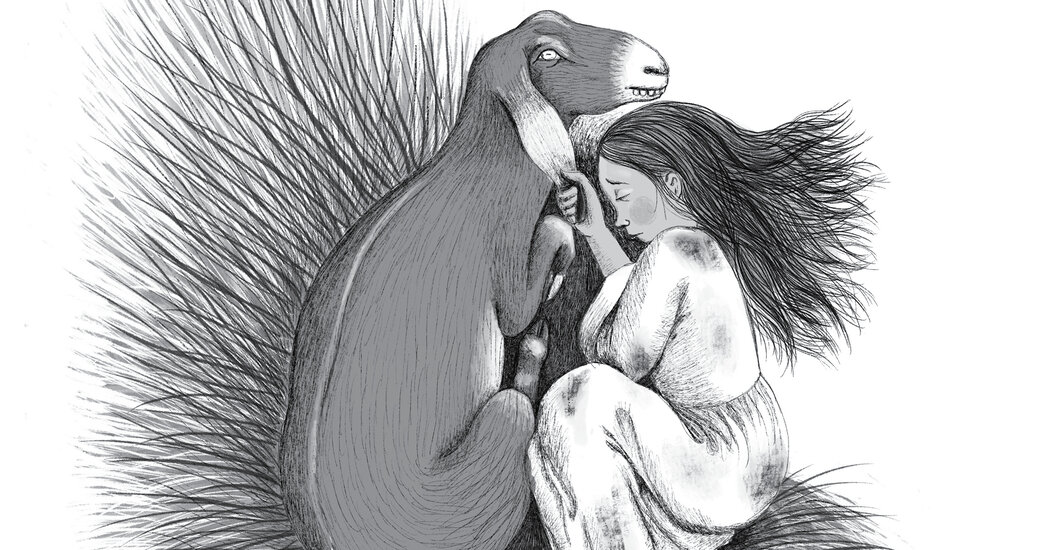 THE BEATRYCE PROPHECY
By Kate DiCamillo
Illustrated by Sophie Blackall

I first met Kate DiCamillo in the pages of one of the Mercy Watson chapter books when it came home from the school library with my daughter many years ago. Answelica, the savage goat of “The Beatryce Prophecy,” is far less good-humored than Mercy, the beaming pig, but then she lives in the harder (and in this case medieval) world of middle grade fiction, where a goat has to look out for herself and the wounded child in her care, and her best tool for judging the character of those around her is to test their reaction to being violently butted. It’s not surprising that the same monks who later deliberately wash their hands of the troublesome problem of Beatryce have failed that test, and fear her as a thing possessed by demons. For them, she is.

But while this novel is full of such ordinarily selfish and cruel people — which might explain Answelica’s mood — there are shining exceptions, and Beatryce, a young girl hunted by the king because of a prophecy that she will unseat him, becomes the needle and thread that pulls them together: from Brother Edik, the timid monk who finds her in the monastery barn covered in blood and dirt, to the orphan boy Jack Dory and the mysterious bearded man she meets in the woods, to her missing mother.

“The Beatryce Prophecy” never tells the lie that nothing bad can happen — death and tragedy get their due — but the story, as well as Sophie Blackall’s lustrous pencil illustrations, lingers in the bright places of work and discovery, illumination and beauty and, above all, love, which in these pages can fix all things, even the broken past, not by making them magically whole again but by existing and being true.

The all-encompassing power of love is a theme in DiCamillo’s work — from “Because of Winn-Dixie” to her two Newbery Medal winners, “The Tale of Despereaux” and “Flora and Ulysses” — as is the investment of animals and children with agency and personality. Love here is built on the deceptively simple belief that other beings in the world are fully our equals, sharing the same inherent worth, with as much right to life and joy — and with sorrow a certain outcome for us all. “Beatryce,” like many of DiCamillo’s other books, relies on that underlying bitterness, because love gains its power by being the one and only thing that can repair it.

The characters are made heroic not by their ability to force change but by their capacity to love. Jack Dory’s sword is the opposite of Chekhov’s gun: It appears for the purpose of not being used. Brother Edik has no weapons and no plan; he doesn’t imagine he will be able to save Beatryce from imprisonment. He has one small goal, for which he’s willing to risk his life: “I want her to know that we came for her.”

DiCamillo’s novels often consist of distinct scenes that are lightly connected; in her best work, such as “The Miraculous Journey of Edward Tulane,” they are individual jewels on a single golden chain, leading back to the beginning with the perfect satisfaction of a clasp closing.

“The Beatryce Prophecy” doesn’t quite achieve these heights. There are a few too many ideas — a tangled loop in the chain. The plotline of Beatryce having been taught to read in a kingdom where that is against the law for girls doesn’t feel fully worked out: Is reading the problem, or storytelling, or respect? But ultimately what matters most is the power to love and be loved. And Beatryce, both the character and the book, are easy to love.