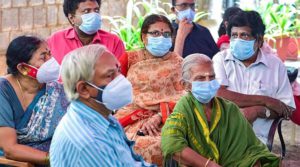 Bengaluru Urban accounted for most number of cases (359), as the city saw 232 discharges and seven deaths. The total number of active cases in the state stood at 18,412. While the positivity rate for the day stood at 0.66 per cent, the Case Fatality Rate (CFR) was 1.81 per cent.

Earlier in the day, Kannada, Culture and Power minister V Sunil Kumar issued a notice to Bangalore Metro Rail Corporation Limited (BMRCL) Managing Director, Anjum Parvez, seeking action and explanation for ignoring state language Kannada at the inauguration event of Bengaluru Metro line between Mysore Road and Kengeri on August 29. Karnataka Chief Minister Basavaraj Bommai and Union Minister of Housing and Urban Affairs Hardeep Singh Puri had participated in the event where the banner on the dais was only in English. Kannada activists said that Kannada was ignored at the programme. People took to social media to criticise the BMRCL and Karnataka Government on this issue.