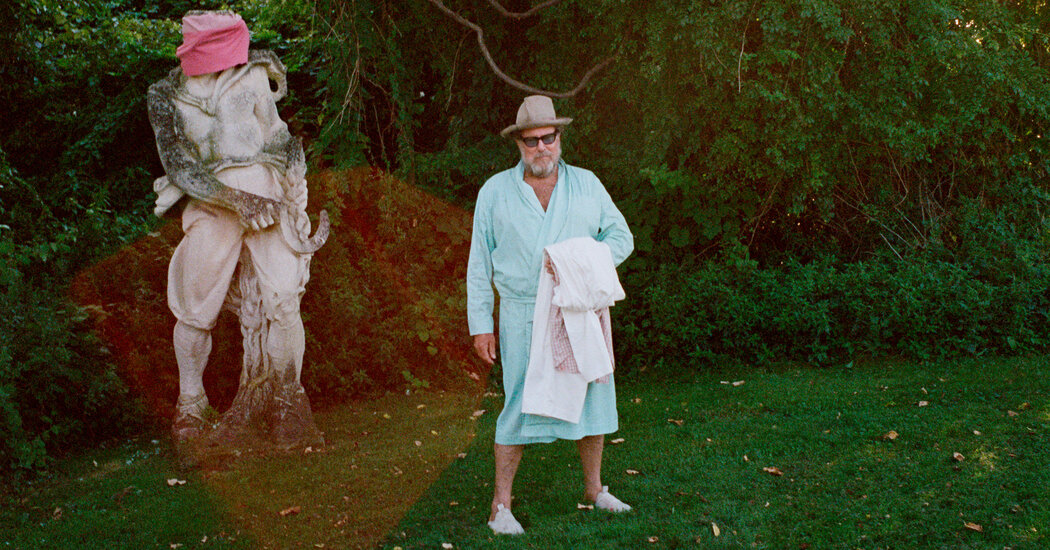 Painting and filmmaking are related mediums, but there is a relatively small canon of good films about painters. These are, by my own, probably highly debatable, count: Kenji Mizoguchi’s “Utamaro and His Five Women” (1946), George Cukor’s “Lust for Life” (1956), John Huston’s “Moulin Rouge” (1952), Andrei Tarkovsky’s “Andrei Rublev” (1969), Peter Greenaway’s “The Draughtsman’s Contract” (1982), Jacque Rivette’s “La Belle Noiseuse” (1990), Ed Harris’s “Pollock” (2000), Julie Taymor’s “Frida” (2002), Mike Leigh’s “Mr. Turner” (2014), Florian Henckel von Donnersmarck’s “Never Look Away” (2018) — and two movies by Julian Schnabel, who is the only director on the list who can also claim to have made a pretty decent living as a painter. His first film, 1996’s “Basquiat,” is about his former contemporary Jean-Michel Basquiat, and is part biopic (the title character is played by the great Jeffrey Wright), part artistic treatise and almost as much about Schnabel, who actually painted the imitations of Basquiat works that appear in the film himself (he refers to them now as “props”) and shot various scenes inside his own New York City home. His second and superior film about a painter, 2018’s “At Eternity’s Gate,” is an existential portrait of Vincent van Gogh — played by Willem Dafoe — that illustrates the contrast between his pained final days and his outsize influence.

For the most part, aside from the occasional prop (he also painted the re-creations of van Gogh works that appear in “At Eternity’s Gate”) Schnabel has kept the directing and the painting parts of his career separate, though a new show at the Brant Foundation in New York puts these two halves of his being into a blender. The premise of the show is, on the surface, pleasingly ridiculous: It’s mostly portraits of the actors in “At Eternity’s Gate” posing as different painters, alongside Schnabel’s own interpretations of works by famous artists. (In addition to van Gogh, he also takes on Frida Kahlo, Caravaggio and Velázquez.) A major component of the exhibition is three portraits of Dafoe, in character as van Gogh from his 1889 painting “Self-Portrait With Bandaged Ear.” Those works, along with all the others in the show, were made atop a canvas covered in broken dishware — a stylistic touchstone of Schnabel’s since the 1970s, which gives these paintings a hulking, almost sculptural look. Alongside the portraits of Dafoe as van Gogh are re-paintings Schnabel made of original van Gogh works, including “Self-Portrait With Bandaged Ear,” which reveal the differences between Dafoe’s craggy face and the artist’s: Van Gogh died at age 37, and Dafoe was in his 60s when he played him, so the works grew out of necessity.

For the film, Schnabel said, “I needed to make paintings that looked like the actor in the movie. I mean, we’re supposed to believe he’s van Gogh. As I painted those paintings of Willem, I observed van Gogh’s own practice of making paintings of his paintings.” He described how there are multiple versions, with slight variations in color and background, of many of van Gogh’s works, including his “Sunflowers” series of still lifes. “So I thought, ‘OK, I’ll make a painting of my painting’” from the movie. After he made three of those, he decided, “Well, I have to now paint van Gogh as van Gogh,” and the project grew from there.

“He was really the first postmodern artist, in a sense,” Schnabel said of van Gogh. “He was always making paintings of paintings — the serial image,” a practice he compared to the screen-printing of Andy Warhol (whom he calls “Andy”). Schnabel was speaking to me by phone from his house in Montauk, on Long Island, where he’s spent a lot of time during the pandemic. “I was very lucky,” he said of his experience during Covid. “I like being alone, and I like not going anywhere.”

He said the process of making these new works, which are essentially the same work, over and over, with small differences (Dafoe is bearded in the bandaged ear portrait, van Gogh is not), was like “dissecting a second into emotional moments.” Oscar Isaac, who plays Paul Gauguin in “At Eternity’s Gate,” makes an appearance, as well, as a different painter, the baroque artist Caravaggio, who is also known for his quirky riffs on self-portraiture. (Caravaggio painted himself as a jaundiced Bacchus in 1593, and later as the decapitated head of Goliath, a pose Isaac really commits himself to here in Schnabel’s 2020 painting “Self-Portrait of Caravaggio as Goliath, Oscar Isaac.”) Schnabel’s son Cy also served as a model, for both a portrait of Velázquez and one of Christ. The latter is quite possibly the most tender, and most sincere painting in Schnabel’s entire body of work.

When a painter interprets another artist’s work, it’s natural to draw certain comparisons. Van Gogh is, in Schnabel’s own words, among “the most overexposed and famous artists” of all time. “It’s one thing,” I said to Schnabel, “to make a movie about van Gogh. It’s another to go toe to toe with him in his own medium.”

I asked him if that gave him any anxiety. He then mentioned a scene in “At Eternity’s Gate” in which the doctor who treats van Gogh in the final weeks of his life, played by Mathieu Amalric, asks him, “Why do you paint?” Dafoe’s face contorts into an aggrieved smile, really more of a grimace, and he says, “I paint, as a matter of fact, to stop thinking.”

“So,” Schnabel said, “I guess I stopped thinking at a certain moment, and painted the paintings.”