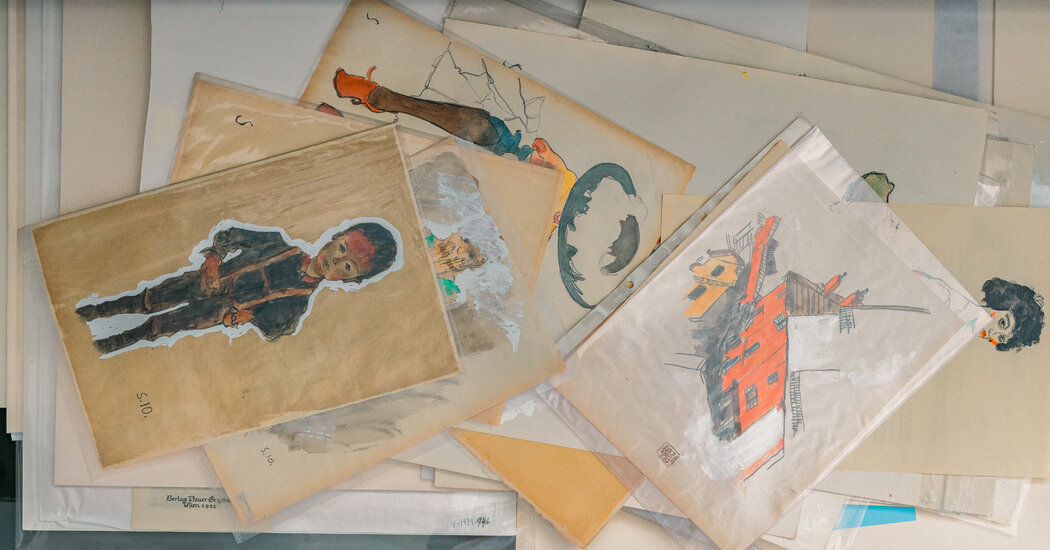 Anyone who thinks works of art declared to be fake simply disappear in disgrace or are destroyed should talk to Jane Kallir, the author of the catalog raisonné for Egon Schiele, the Austrian painter. She was offered the same fake Schiele watercolor for authentication, she said, 10 times by 10 different collectors.

Or perhaps chat with David L. Hall, the former federal prosecutor who used to handle cases developed by the F.B.I.’s art crime team. He will tell you about a watercolor attributed to Andrew Wyeth that came on the market three times after Wyeth himself called it a fake.

One dealer had paid $20,000 for it, and when he tried to sell it at auction in 2008, the curator of Wyeth’s collection recognized it and contacted the F.B.I., which seized it. The F.B.I. ultimately gave it to Hall as a token of appreciation for all the years he spent pursuing the cases it had developed.

“It’s on a shelf in my office,” Hall, now in private practice, said in an interview. “When I got it, I wrote ‘forgery’ in ink across the back.

While it can be comforting to hear about fakes that are ordered destroyed by judges or are boldly marked as frauds, the reality is more complicated.

Works declared to be fake often enjoy diverse afterlives, according to law enforcement officials, academic scholars and art market veterans. Some are retained by universities as study instruments, some as the legacies of well-intentioned donors who lacked an expert eye. Some were used in a sting by an undercover agent who hoped the sense of wealth created by fancy paintings on a yacht would be a persuasive part of his pose.

But many of the works, experts say, have second lives that very much resemble their first: as fakes recycled to unsuspecting buyers.

“We see that things circulate back into the market — I think it happens routinely,” said Timothy Carpenter, supervisory special agent of the F.B.I.’s art crime team.

Jack Flam, president and chief executive of the Dedalus Foundation, which was founded by the artist Robert Motherwell to foster understanding of modern art, said that while putting together the catalog raisonné of Motherwell’s paintings and collages, the foundation told a collector his painting could not be included because it was fake. Several years later, another collector who had bought the painting from the first showed up, only to confront the same disappointing news.

Kallir, the author of the Schiele catalog raisonné and president of the Kallir Research Institute, said she saw “on average,” one fake a week.

The issue is complicated by the fact that a finding that something is fake is often nothing more than an opinion — expert in many cases, reliable in many cases — but nonetheless an opinion. Owners of such items are not always willing to embrace that they have been duped, especially if they had paid a lot for a discredited work.

“Sometimes, expertise changes over generations,” said James Roundell, a director of the London-based dealer Dickinson, who once headed the impressionist and modern art department at Christie’s.

“When someone tells the owner of a collection that he has something that is not genuine, the collector does not want to announce to the outside world that he has a fake.”

Carpenter said he recalled a case where a beginning collector had purchased roughly 300 prints, nearly all of them fake, and was turned away when he tried to sell them through an auction house.

Carpenter said the auction house called in the F.B.I. “We seized all these pieces,” he said, “but this guy didn’t like it. He thought the auction house didn’t know what they were doing. He thought we didn’t know what we were doing. He allowed us to keep 40 or so that we seized, but demanded the return of the rest. We had to. They’re his property.”

The collector ultimately put the prints in a storage facility, from which they were stolen, Carpenter said. “These prints almost certainly are back into the market,” he said.

Deciding whether to market a work with a disputed attribution becomes much easier in cases where the hand of the forger has become evident. In those cases, the matter becomes, not a difference of opinion, but an act of fraud. Consider the case of the now defunct Knoedler & Company gallery, which sold dozens of works attributed to modernist masters that were all fake.

The versatile painter who made them all ultimately acknowledged his role in their creation, though he denied knowing they would be marketed as originals. The dealer who brought them to market through Knoedler ultimately pleaded guilty to conspiracy, fraud and other crimes. The gallery and its director, Anne Freedman, were never charged, but they were sued, and after the lawsuits were settled, the owners of 10 of the discredited works, were interested in keeping them, said Luke Nikas, a lawyer for Freedman.

Three more of the fakes, originally sold as the work of Mark Rothko, Jackson Pollock and Robert Motherwell, hang in Nikas’s office, on loan from Freedman who has said she herself had been duped into buying several.

“They are important artifacts in the histories of law and art, which intersect here in a compelling story about culture, morality, and psychology,” Nikas said.

Though there are many in the art world who think that those fascinated by fakes overstate their prevalence in the market, there is little question that discredited works have a way of hanging around.

Gary Vikan, former director of the Walters Art Museum in Baltimore, said the museum has hundreds of fakes. “They’re mainly Roman, medieval and Renaissance works acquired by the founder Henry Walters, in 1902,” Vikan said. “Some of the works had been sold to him as paintings by Michelangelo, Titian and Raphael.”

The Manhattan district attorney’s office has 14 fake Damien Hirst prints that were recovered from the apartment of a forger in 2016, according to a spokesman.

Universities with large collections of fakes include New York University and Harvard. They often use them as teaching tools.

“We have about 1,000 objects that were donated as fakes by dealers, collectors and auction houses,” said Margaret Ellis, the Eugene Thaw professor emerita of paper conservation at the Conservation Center of New York University’s Institute of Fine Arts. “But things are occasionally donated to universities and museums that are later determined to be fake.”

“The works range from fake ancient Greek bronzes and fake Rembrandts, Turners and van Goghs to contemporary prints,” Ellis said. “These help students know what they are looking at and can be extremely educational when you put them side by side with the real work. Art history students discover that stylistic analysis needs to be supported by technical analysis.”

The Harvard Art Museums — comprising the Fogg, the Busch-Reisinger and the Arthur M. Sackler museums — have about 250 fake paintings and drawings donated by collectors and dealers. Miriam Stewart, curator of the collection in the division of European and American art, said works range from fakes of Daumier and Corot, to Matisse and George Inness.

“Most of the works were accepted as fakes,” Stewart said. “We were known as a sort of repository of fakes a long time ago. But now we don’t actively take in fakes. We haven’t done that in decades.”

The F.B.I. has confiscated thousands of fakes, which are typically not destroyed, but stored in many places.

“I can’t give you an exact number, but the total is more than 3,000,” Carpenter said. “It’s mainly prints by such artists as Pablo Picasso, Marc Chagall, Roy Lichtenstein, Andy Warhol and Joan Miró. I won’t say they are in every field office. The things are kind of spread out, but the bulk of them are in storage facilities in New York, Miami, Chicago, Philadelphia and Los Angeles.”

Rarely, the F.B.I. has exhibited some of its fakes. One exhibition, “Caveat Emptor” was hosted by Fordham University in 2013 and included paintings once mistakenly attributed to Rembrandt, Gauguin, Renoir, Gris, Matisse and Chagall.

In one instance, the F.B.I. used fake artwork it had confiscated as part of a sting operation.

Robert Wittman, former head of the F.B.I. art crime team, said that, in 2007, when he was an undercover agent posing as a shady art dealer, he borrowed six fake paintings supposedly by Dalí, Degas, Soutine, O’Keeffe, Klimt and Chagall from an F.B.I. warehouse in Miami to “prove to two French mobsters that I was real.”

The mobsters knew him as Bob Clay. “In using my true first name,” he said, “I was following a cardinal rule of working undercover: Keep the lies to a minimum. The more lies you tell, the more you have to remember.”

The script called for Wittman to sell the works to a Colombian drug dealer on a yacht off the coast of Florida. The drug dealer, as well as the captain, steward, and five bikini-clad women on board were F.B.I. agents. The sale was completed with fake diamonds and a supposed bank transfer, but the mobsters eventually disappeared.

“The reason the art helped was that part of my legend as an undercover agent was that I dealt with stolen paintings.” Wittman said. “This proved that I was involved in criminal activity.”

The United States Postal Inspection Service, the law enforcement arm of the Postal Service, also has a small collection of fakes that were seized in an undercover sting in 1991 led by Jack Ellis, a Postal Service inspector, that helped recover 100,000 fake prints purported to be by Dalí, Picasso, Miró, Chagall and others.

Most of the seized prints were destroyed at the direction of a judge but the Postal Service asked that some be saved. “Inspectors also recovered several sheets of paper in which the forger practiced how to fake Dalí signatures,” said James Tendick, a former colleague of Ellis.

As fascinating, and as convincing, as fakes can be, they certainly lose value once they’re unmasked. Kallir, the Schiele expert, said she had witnessed that firsthand.

“I have three fake Schiele oils and about 20 fake Schiele works on paper that were mostly abandoned by people who originally brought them in for authentication,” she said. “After we gave them our opinion, they didn’t want them back.”