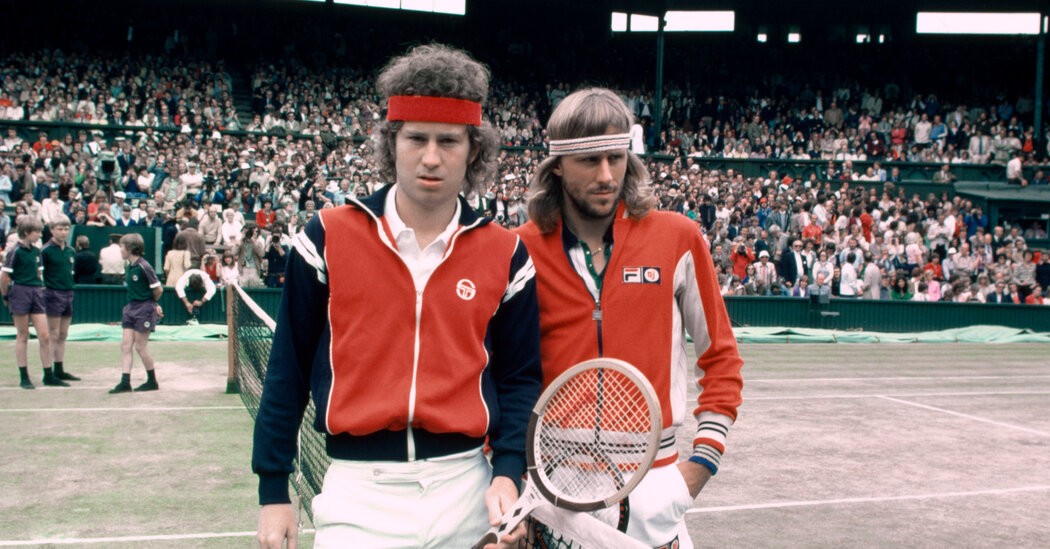 By comparison, Bjorn Borg and John McEnroe played 14 matches from 1978 to 1981. And yet they produced one of the greatest and still-talked-about rivalries in the history of the sport.

Forty years ago, as the setting sun cast shadows across Louis Armstrong Stadium, more than 18,000 spectators saw a bizarre ending to a too-short era that involved two of the game’s all-time best. First, they watched in awe as McEnroe, a native New Yorker, won his third consecutive United States Open by beating Borg 4-6, 6-2, 6-4, 6-3 in 2 hours 40 minutes. But what happened next caused bewilderment, followed by concern, at the National Tennis Center in Flushing Meadows, Queens.

As McEnroe was hugging his parents, Kay and John Sr., and holding the champion’s trophy aloft, Borg was nowhere to be found. He had skipped the post-match ceremony and obligatory news conference. He had left the stadium with Lennart Bergelin, his longtime coach and confidant, hastily grabbed a shower and hopped in a waiting station wagon, never again to be seen competing at the U.S. Open, or any other major.

Borg, barely 25 at the time, was a six-time French Open champion and had also won five consecutive Wimbledon titles from 1976 to 1980 before McEnroe beat him in the 1981 final. Through much of the U.S. Open final he remained close with McEnroe, even leading 4-2 after they had split the first two sets. But when McEnroe broke back and evened the third set, Borg seemed to vanish mentally. He lost the fourth set meekly, shook hands and disappeared.

“To me, it was bittersweet,” McEnroe said during a phone interview in August from his home in Malibu, Calif. “The way it ended, with a whimper, with him walking out of the court before the ceremony to never play again. So even though it was a tremendous moment for me, winning Wimbledon and the Open back-to-back and taking over the No. 1 ranking, looking back I wish we could have kept playing.

“For years, I would see him and say: ‘When are you coming back? This is ridiculous, let’s go,’” McEnroe, who has long been a tennis commentator for ESPN, added. “It just felt like there was a void and it took me a couple of years to accept that. I think it was too bad for the sport as well.”

Borg’s manager, Per Hjertquist, did not respond to multiple requests for an interview.

What many did not know at the time was that Borg had received two death threats during the Open, both called in to the switchboard at the Tennis Center, though no one has ever said why. One was before his semifinal win over Jimmy Connors. The other was at 4:45 p.m. on Sunday, in the middle of the first set against McEnroe. Borg was not told about that threat until Bergelin alerted him after the match.

Many of the fans that day were pulling for Borg, the suave Swede who wore a red, white and blue headband stretched across his forehead to control his shoulder-length mane of dirty-blond hair. Borg was playing in his 10th U.S. Open and fourth final without a championship. He had lost to Jimmy Connors in 1976 and 1978 and to McEnroe in 1980, just two months after beating McEnroe in a five-set Wimbledon final that featured a 34-point fourth-set tiebreaker, and an 8-6 fifth set.

Their stark differences were part of the Borg-McEnroe allure. While Borg preferred to quietly stalk the baseline, swinging his two-handed backhand as if it were a pendulum, the left-handed McEnroe was all about disruption, in his game and in his behavior.

Even their fellow competitors saw the value in the matchup.

“Bjorn had a certain aloofness to him,” said Rick Meyer, who grew up playing with McEnroe and lost to him in the third round of the 1980 U.S. Open. “He never played doubles, never practiced on site, was basically perfect for the quiet atmosphere of Wimbledon. John, on the other hand, was all about the electricity of New York where people behaved as if it was a boxing match. In the end, that hurt Bjorn.”

During the late ’70s and early ’80s, tennis in the United States was exploding. Everyone wanted to play and viewership, in person and on television, was at never-before-seen levels. The day before the 1981 U.S. Open men’s final, 18-year-old Tracy Austin won her second women’s title with a 1-6, 7-6 (4), 7-6 (1) win over Martina Navratilova. Navratilova, who had beaten Chris Evert in the semifinals, sobbed, not because she lost but because the New York crowd had finally embraced her six years after she had defected from Czechoslovakia.

In March 1981, World Tennis magazine ran a cover photo of Borg and McEnroe, standing back-to-back, revolutionary-style guns pointed up, with the headline “McEnroe-Borg: Will Their Duels Become Legend?”

In the months and years after the 1981 U.S. Open, Borg made a few attempts to return to the pro tour. He never played another major, but he captained Team Europe to victory in the 2017, 2018 and 2019 Laver Cup competitions (versus Team World, captained by McEnroe). His son, Leo, has followed in his footsteps and reached the third round of the French Open junior tournament in May and the second round at Junior Wimbledon in July. Borg also started a successful fashion line.

“There are a lot of reasons that Borg may have stopped playing, whether it was because he lost the No. 1 ranking, or had been doing it a long time and was a little burned out or that he was the first athlete to make enough money to be able to walk away,” McEnroe said. “But I just wanted to know if he was OK, living a happy life, feeling content and not second-guessing himself and wishing 30 years later that he had done things differently. That’s one of those things that we may never know the answer to.”