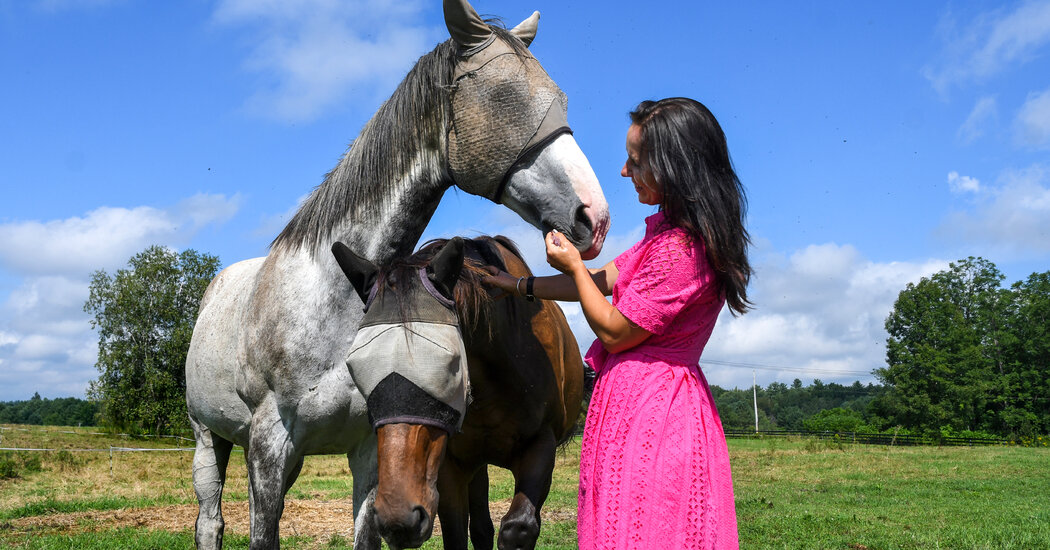 SARATOGA SPRINGS, N.Y. — Jessica Paquette calls herself a “weird horse girl.” She was 6 when she was first entranced by them, at a New England fair. They were so big, but gentle enough for her to reach up and rub their noses.

She wanted them in her life.

Her family was working class, making the life of a young equestrian out of reach. But a nearby racetrack, Rockingham Park, in Salem, N.H., became her classroom. She studied the horses up close as a hot walker, getting up before dawn to cool them down.

After school, she was back at the track in her Catholic school uniform to learn about pedigree and pace from a group of horse playing seniors who, besides imparting knowledge, made sure no one bothered the girl in the plaid jumper.

By 18, she was taking bets as a mutuel clerk at Suffolk Downs in Boston and studying journalism at Rivier University in Nashua, N.H.

She talked her way into an internship in the press box at Suffolk, then into a job in its marketing department. Finally, she became an in-house, on-air personality, parsing how the racehorses looked in the paddock and picking winners.

At 37, she is a multi-hyphenate who has devoted herself to thoroughbreds, during their racing careers and after.

Her connection to them was obvious at the Thoroughbred Retirement Foundation’s summer farm here when she had Brickbat and My Teddy Bear — former racehorses — curtsying to her for peppermints and nuzzles. She is communications director for the foundation, which works to protect retired horses from abuse, neglect and slaughter, boarding a few at the summer farm.

“If I could go back and tell my teenage self what she would be doing in 20 years, I wouldn’t have believed it,” Paquette said. “Everything I have is because of horses.”

In addition to her work with the foundation, she does public relations work for TVG, the horse racing network. She is also handicapper for The Saratoga Special, a must-read tabloid here for anyone besotted with racehorses and the human characters who surround them.

Those lessons with the old-timers at Rockingham Park have paid off. This month, Paquette selected a horse named State of Rest to win the $1 million Saratoga Derby Invitational. He did, rewarding $2 bettors with a $44.20 payoff.

“I don’t like picking favorites,” she said. “When you are a public handicapper, you have to pick some favorites to satisfy the armchair quarterbacks. But it’s more fun to come up with a horse that is overlooked.”

Each Sunday, Paquette boards a plane in Boston, her home, for Richmond, Va., where she is the paddock analyst for Colonial Downs.

On Thursday, she flies home to her husband, her dogs and the two racehorses she rescued from the racetrack, What a Trippi and Puget Sound.

There will not be a third.

With What a Trippi, however, she belatedly achieved her dream of becoming an equestrian. It was love at first sight when Paquette saw him in the paddock at Suffolk Downs in his first race. He was handsome and pedigreed.

“I wanted him from the moment I saw him,” Paquette said. “I’ll never know why, but he was the one.”

She tracked him over a hard-knocking, 42-race career in which he won nine times and finished in the money in 10 other races, earning more than $111,000. In 2007, What a Trippi was named New England’s champion 3-year-old horse.

Three years later, his racing career behind him, Paquette bought him for $500.

“He was totally sound,” she said.

Horse and rider went to work with a show horse trainer, where they learned to jump.

By 2014, they were traveling the New England circuit competing as a hunter, where qualities such as manners, graceful movement and correct jumping style are rewarded. In 2017, What a Trippi was named New England’s reserve champion — or runner-up — in its hunter division.

The experience deepened her commitment to finding a home for thoroughbreds beyond their racing days.

“It’s the achievement of my life,” Paquette said. “They are not machines. Even if they are busts as racehorses, they are athletes, and we need to find a job for them.”