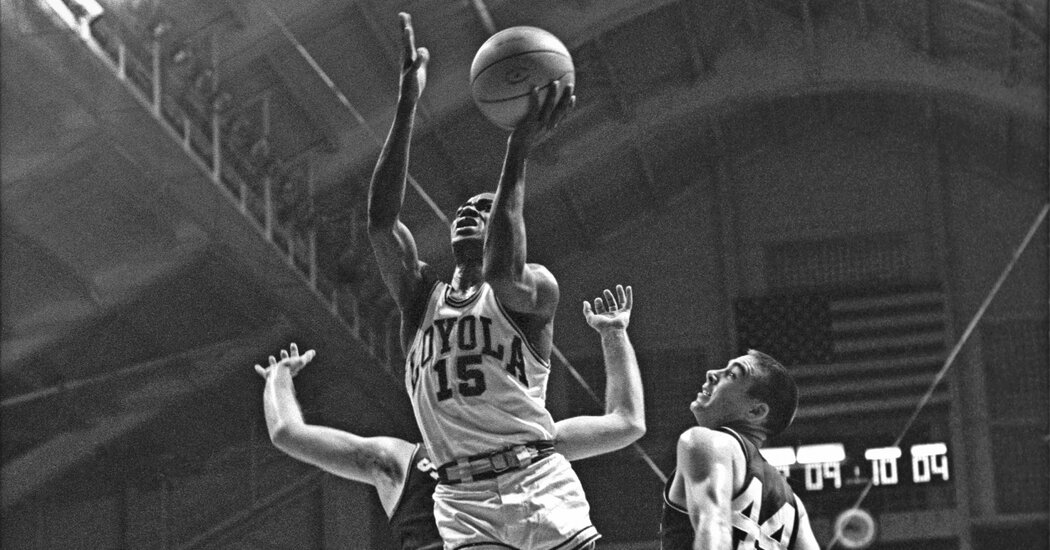 Jerry Harkness, a former All-American forward who led Loyola University Chicago’s integrated basketball team to the 1963 N.C.A.A. championship, along the way defeating a Mississippi State team that had previously refused to play against Black athletes, died on Tuesday in Indianapolis. He was 81.

The death, in a hospital, was confirmed by his son, Jerald. No cause was given.

The 1963 tournament, and in particular Loyola’s second-round game against Mississippi State on March 11, illustrated the racial tension that was prevalent in sports in the early 1960s. The all-white Mississippi State Bulldogs had chosen not to go to three previous N.C.A.A. tournaments, to avoid facing Black opponents.

George Ireland, the coach of the Loyola Ramblers, had been irritating rival coaches by starting four Black players, including Harkness, violating a practice at the time of playing no more than three.

“I don’t know if it was unwritten rules he didn’t go by, but putting in four Blacks at the time was not popular at all,” Harkness told The Chicago Tribune in 2018.

The game, in East Lansing, Mich., was covered by more than the usual number of reporters and photographers for a regional semifinal matchup.

“You don’t realize history is being made until I went out to shake the captain’s hand at Mississippi State and I saw all these lights go off, clack, clack, clack,” Harkness said in an interview in 2000 with the Black oral history website The HistoryMakers.

Though the Ramblers had received hate mail early in the tournament, there were no incidents during the game. Loyola won easily, 61-51, and Harkness led all scorers with 20 points.

“They were perfect gentlemen, just like any other teams we played,” Joe Dan Gold, the Bulldogs’ captain, said afterward. “They beat us on the offensive backboard.”

The Loyola-Mississippi State game nearly didn’t happen, and it would not have happened if segregationists, led by Gov. Ross Barnett of Mississippi, had had their way.

Mississippi State wanted to play in the tournament — the team had won the Southeastern Conference title — but a state senator persuaded a judge to issue a temporary injunction to keep the team from going to East Lansing.

“The biggest thing at the time is, we didn’t know if they were coming,” Harkness told ESPN in 2012.

But Mississippi State’s president, Dean Colvard, concocted a plan to avoid being served with the injunction, according to an ESPN account. He told Babe McCarthy, the team’s coach, to drive to Memphis while he went to Alabama for a speaking engagement.

An assistant coach then took the freshman players and some reserves to a private plane. Once they appeared safe from a process server, he summoned the rest of the team for the flight, from Starkville, Miss., to Nashville, where McCarthy met them. The team, united again, flew to Michigan to face Loyola. By that point the injunction had been suspended.

The Ramblers rolled on after beating Mississippi State. In the next two rounds they defeated the University of Illinois, Urbana-Champaign; and Duke University.

In the final game, against the University of Cincinnati, the two-time defending champion, Loyola trailed by 15 points midway through the second half but tied the game with six seconds left on a shot by Harkness. The Ramblers won in overtime, 60-58.

Jerald Harkness was born on May 7, 1940, in Harlem, to Lindsey and Lucille (Bailey) Harkness. His father was a security guard. His parents divorced when he was young, and his mother raised Jerry and his sister, Marlene, on her own.

Athletic but shy, Jerry did not feel confident enough to try out for the basketball team at DeWitt Clinton High School in the Bronx. But one day, while he was playing basketball at the Harlem Y.M.C.A., an observer told him that he had talent.

“You know, you’re not that bad of an athlete,” he recalled the observer, the baseball great Jackie Robinson, telling him. “You might be able to get a scholarship to college.”

Harkness made the Clinton varsity team and scored 14 points to lead the Governors to New York City’s Public School Athletic League championship in 1958.

He moved on to Loyola, where Ireland, the coach, needing to attract talent, had recruited four Black players: Harkness and Ron Miller from New York City, Les Hunter and Vic Rouse from a high school in Nashville. The only white starter on the 1963 title team was Johnny Egan.

Harkness averaged 21.6 points a game during his three years on the Loyola varsity, and the team’s record improved to 29-2 (including the five tournament wins) from 15-8.

He was drafted by the Knicks but played only one season before going to work as a salesman for Quaker Oats. In 1967, the inaugural year of the American Basketball Association, he joined the new league’s Indiana Pacers. He played two seasons there, averaging 7.3 points a game.

In addition to his son — who produced a documentary, “Game of Change” (2009), about the Loyola-Mississippi State game from the Bulldogs’ perspective — Harkness is survived by his wife, Sarah (Scruggs) Harkness; his daughter, Julie Harkness Arnold; and four grandchildren. His first marriage ended in divorce.

Harkness developed a friendship with Joe Dan Gold, his Mississippi State rival, and in 2011 attended his funeral. Beside Gold’s coffin was a vivid memory of their game: a black-and-white photograph of the two men shaking hands at midcourt. Harkness cried.