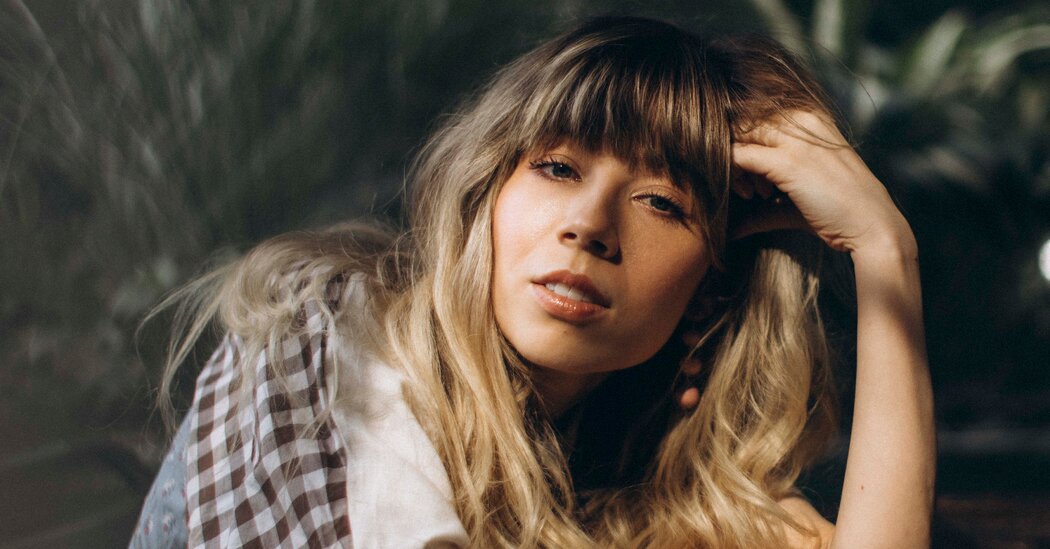 When Jennette McCurdy was 16, she was in her third year on “iCarly,” the hit teen sitcom on Nickelodeon. Millions of young viewers admired her for her comic portrayal of Sam Puckett, the wisecracking pal of its title character, and she was proud that her lucrative work was helping to support her family.

McCurdy was also living under the stringent control of her mother, Debra, who oversaw her career, determined her meals — her dinners consisted of shredded pieces of low-cal bologna and lettuce sprayed with dressing — and even administered her showers.

Her mother gave her breast and vaginal exams, which she said were inspections for cancer, and shaved her daughter’s legs while McCurdy remained largely uneducated about the changes her body was experiencing.

She struggled with obsessive-compulsive disorder, eating disorders and anxiety triggered by the constant attention she received as a celebrity, but she felt trapped in her work. She also believed she owed her unfaltering loyalty to her mother, who had recovered from breast cancer when Jennette was very young, only for her cancer to return in 2010, at the height of her daughter’s fame.

Debra McCurdy died in 2013, and Jennette, now 30, is still reckoning with the gravitational pull exerted by her mother, who steered her to the trade that gave her visibility and financial stability while she controlled virtually every aspect of her daughter’s existence.

When Jennette McCurdy wrote a memoir, which Simon and Schuster will publish on Aug. 9, it was clear to her that her relationship with her mother would provide its narrative force. “It’s the heartbeat of my life,” she said recently.

The book is titled “I’m Glad My Mom Died,” and its cover bears the image of McCurdy, a narrow half-smile on her face, holding a pink funeral urn with confetti strands peeking over its rim. The presentation might be off-putting to some readers; the author is well aware. But she also feels it accurately encapsulates a coming-of-age story that is alternately harrowing and mordantly funny.

When you have grown up as she has, feeling tenderness and anger toward a person you’ve seen wield immense power while fighting for her own life, she said, “You can’t believe how hard and how laughable it is at the same time. That’s completely my sense of humor.”

“I feel like I’ve done the processing and put in the work to earn a title or a thought that feels provocative,” she added.

Though McCurdy may have the résumé of a seasoned Hollywood veteran, she carried herself like a wide-eyed tourist on a visit to New York in late June. Over afternoon tea at the BG Restaurant in midtown Manhattan, she gazed at fellow patrons, asked for Broadway theater recommendations and chided herself about a transcendental meditation class she’d taken near her home in Los Angeles.

When it comes to new endeavors, McCurdy said, “I think things should feel natural. So much of my life was about forcing or pushing things. So when something feels like it’s working, I’ll let that be, and anything else can fall by the wayside.”

As McCurdy recounts in her memoir, she was 6 when she started auditioning for acting roles, having been shepherded into the work by her mother, who was her herself discouraged from becoming an actress by her own parents.

Growing up in Southern California, McCurdy was cast in TV commercials and shows like “Mad TV,” “Malcolm in the Middle” and “CSI” before landing “iCarly,” which had its debut in 2007. Yet she never had any illusions about who was really benefiting from these accomplishments. As she writes of the moment she learned she had booked “iCarly,” “Everything’s going to be better. Mom will finally be happy. Her dream has come true.”

McCurdy endured various embarrassments and indignities at Nickelodeon, where she writes of being photographed in a bikini at a wardrobe fitting and being encouraged to drink alcohol by an intimidating figure she simply calls the Creator. In situations where her mother was present, Debra did not intervene or speak up, instructing Jennette that this was the price of showbiz success: “Everyone wants what you have,” she would tell her daughter.

When McCurdy was promised an “iCarly” spinoff, she assumed she’d be given her own show — only to receive a co-starring slot on “Sam & Cat,” which paired her with the future pop-music sensation Ariana Grande.

There, she says her superiors on these shows prevented her from pursuing career opportunities outside the show while Grande thrived in her extracurricular work. As McCurdy writes, “What finally undid me was when Ariana came whistle-toning in with excitement because she had spent the previous evening playing charades at Tom Hanks’s house. That was the moment I broke.”

As McCurdy grew older and more independent, her relationship with her mother became further strained. The book reproduces an email in which her mother calls her “a SLUT,” “a FLOOZY” and “an UGLY MONSTER,” then concludes with a request for money for a refrigerator. When Debra had a recurrence of cancer and died, Jennette, then 21, was liberated — and left to navigate a complex world without her guidance, contending with destructive romantic relationships, bulimia, anorexia and alcohol abuse.

“iCarly” ended its original run in 2012, and “Sam & Cat” ran just one season from 2013-14, after which, McCurdy writes, she turned down a $300,000 offer from Nickelodeon if she agreed never to speak publicly about her experiences at the network. (A press representative for Nickelodeon declined to comment.)

She was free to reclaim her personal life and pursue other projects, like the Netflix science-fiction series “Between.” But she found it difficult to let go of the resentment from how she’d been treated when she was younger. As she said in an interview, “It felt like all these decisions were being made on my behalf and I was the last one to know about them. That’s really infuriating. It led to a lot of rage.”

Even now, McCurdy found that revisiting the era of her child stardom resurfaced raw feelings about a parent, and an industry, that had failed to protect her.

Marcus McCurdy, the oldest of Jennette’s three brothers, said that their mother was consistently volatile when they were growing up.

“You were always walking on eggshells — is it going to be nice mom or crazy mom today?” he said. “One day she’d be fine, the next day she’d be yelling at everybody. Every holiday was super overdramatic. She’d lose her mind on Christmas if something wasn’t perfect.”

Friends and colleagues from Jennette McCurdy’s time as a child actor said they could sense the tension in her relationship with her mother, even if they did not yet know the exact details.

“Jennette can be outgoing, very forward and bright and electric,” said David Archuleta, the pop singer and “American Idol” finalist. “I could also tell she was very guarded, very protective of her mom and they were very close.”

Archuleta, whose career was closely controlled by his father when he was a minor, said such arrangements can be destructive for children.

“Because you’re always with that parent, they don’t really let you around anyone else,” Archuleta said. “You don’t look at it as a control thing — you look at it as, ‘Oh, they’re looking out for me.’ And they make you feel like everyone is against you.”

Miranda Cosgrove, the star of “iCarly,” said that though she and McCurdy quickly became close on the show, she was initially unaware of many difficulties her friend was facing, which McCurdy only revealed as they became older.

“When you’re young, you’re so in your own head,” Cosgrove said. “You can’t imagine that people around you are having much harder struggles.”

In a softer voice, Cosgrove added, “You don’t expect things like that from the person in the room who’s making everyone laugh.”

For McCurdy, opening up about herself to the wider world has been a long-term process. In her late teens and early 20s, she wrote essays for The Wall Street Journal that shared some of her insights into child stardom. But today she feels she was not fully candid.

“If I had been truthful at that time,” she explained, “I would have said, ‘Yeah, I wrote this and then I went and made myself throw up for four minutes afterward.’”

A few years ago, McCurdy started writing a new series of personal essays, including several about her mother, and shared them with her manager at the time. “My manager sent me back a nice email that said, ‘This is great — I don’t really know what to do with this.’ I’ll never forget the ‘xoxo’ at the end.” (McCurdy no longer works with that manager.)

Instead, she began performing a one-woman show, also called “I’m Glad My Mom Died,” in Los Angeles. Though the pandemic impeded plans to take the show on the road, McCurdy used some of her down time to craft the memoir. “I really wanted to build it out a lot more, get more into the childhood aspect of the story and work through the arc in a way that you only can with a book,” she explained.

Marcus McCurdy said he supported his sister’s decision to write her memoir, even if her calling it “I’m Glad My Mom Died” has caused some consternation in the family.

“Our grandmother is very upset about that title,” Marcus said, adding that he and his sister share a similar sense of humor. “It’s more of a coping mechanism,” he said. “You can either be like, ‘Woe is me, my life is horrible.’ Or you find the humor in these things that are really tragic.”

Archuleta also said it was empowering for McCurdy to write her book. “It’s given her back some of her strength, her confidence,” he said.

McCurdy is writing another set of essays about coming into her own in her 20s, as well as a novel. (Its protagonist, she said, is “either who I wish I could be in some aspects, or who I hope I never am in other aspects. But it’s probably me, right?”)

Aside from a few watch parties that her family held for her earliest episodic TV work, McCurdy told me, “I’ve never seen any of the shows that I’ve been on.” For her, these were fraught documents of her suffering and unwelcome reminders of the helplessness she felt at the time.

A few years ago, after the cancellation of her Netflix series, McCurdy decided to take a break from acting. As she writes in the memoir, “I want my life to be in my hands. Not an eating disorder’s or a casting director’s or an agent’s or my mom’s. Mine.” She did not take part in a recent revival of “iCarly” on Paramount+. But McCurdy said that her experience with her one-woman show has shown her there might be ways that performance could be constructive for her in the future.

“It felt significant in repairing some of the really weighted, complicated relationships that I had with acting,” she said. “It felt like finally I’m saying my words and saying things I want to be saying. I’m myself.”

Though McCurdy can still find it uncomfortable to reflect on her past, it also makes her hopeful to focus on the present and to see the friends and colleagues who are part of her life because she alone chose for them to be in it.

“I have people around me now that are so supportive and so loving,” she said. “It makes me tearful with joy. I feel so safe. I feel so much trust and so much openness.”