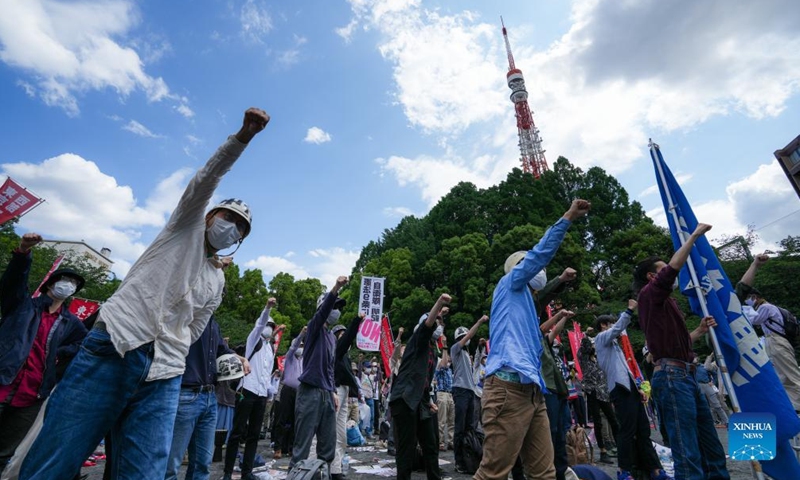 Japan has embarked on a dangerous path with a series of reckless domestic and foreign policies that are seriously threatening peace and stability in the Asia-Pacific and the world. The latest move sees Japan ramping up a campaign to push for the changes to its pacifist constitution at home apart from seeking to double its defense budget.

In terms of foreign policy, Tokyo has been keen on hyping the Ukraine crisis and the so-called “China threat” to support and advocate expansion of NATO in the Asia-Pacific, while constantly provoking China on its core interests.

Such a major shift in Japan’s foreign and domestic policies that seek to revive its militarism past, which brought devastation to many in the Asia-Pacific, and to help bring the notorious, confrontation-oriented NATO to the region calls for vigilance among countries in the region, analysts noted.

Ahead of Japanese Prime Minister Fumio Kishida’s attending the NATO summit next week in Madrid, Spain, which would mark the first Japanese prime minister to have done so, the Number 2 man in the country’s ruling Liberal Party (LDP) Toshimitsu Motegi revealed to media Monday that he wants to see parliament initiate the process of constitutional reforms after the July 10 House of Councilors election.

The LDP’s secretary general said that “after the election, we want to as quickly as we can propose to the Diet constitutional revisions and have the proposed changes initiated,” Japan’s Kyoto News Agency reported on Monday.

For any revision to Japan’s postwar pacifist constitution to be initiated, approval by a two-thirds majority in both houses is required.

Motegi’s remarks were made under the provision that pro-amendment lawmakers including in the LDP, its junior coalition partner Komeito, the Japan Innovation Party and the Democratic Party for the People would secure two-thirds or more seats in upper house elections, according to the report.

Article 9 of the Constitution renounces Japan’s ability to wage war and forbids it from maintaining “land, sea, and air forces, as well as other war potential.” Since its promulgation in 1946, the Constitution has never been amended. To do so, more than two-thirds of lawmakers in both the upper house and the House of Representatives must vote in favor of the proposals. The changes would then need approval from a majority of voters in a national referendum.

Japan’s former prime minister Shinzo Abe, who served from 2006 to 2007, and again from 2012 to 2020, had aimed to revise the supreme charter during his tenure. He had called for clarifying the legal status of the country’s Self-Defense Forces (SDF) by explicitly mentioning it in the Constitution to end arguments that the SDF are unconstitutional.

If the constitutional amendment succeeds in the future, Japan is likely to get rid of the constraint of the pacifist constitution, can participate in wars overseas and join the aggressive multilateral organization NATO, and seek to develop into a military power, which will be very harmful to Japan, the Asia-Pacific region and the world, Liu Jiangyong, vice dean of the Institute of Modern International Relations at Tsinghua University, told the Global Times on Tuesday.

The “remilitarization” ambition of the Japanese right-wing forces has also been revived following the outbreak of Russia-Ukraine conflict. On Sunday, leaders of Japan’s ruling and opposition parties including Prime Minister Fumio Kishida discussed on TV whether Japan should consider acquiring a nuclear-powered submarine. Kishida, who heads the ruling LDP, stressed the need to reinforce Japan’s defenses at a time when Russia’s military operation in Ukraine and “Chinese military assertiveness” have highlighted Japan’s security challenges.

The ruling LDP panel on national security also advised in April 2022 the Kishida administration to not only increase its defense spending to 2 percent of Japan’s GDP, but also to seek enemy-base strike capability, claiming to be ways to respond to the rising threat from China, North Korea and Russia.

Japan is committed to an exclusively defense-oriented policy under the pacifist constitution, and its defense spending has been limited to around 1 percent of GDP. Even so, Japan’s military spending is seventh in the world, according to media.

It is not sensible for Japan to significantly increase defense spending when its economy is stagnant and its GDP contracted, Liu pointed out, noting the pursuit of military expansion and war preparation in violation of national interests is outrageous.

In a set of April draft proposals as part of Japanese government’s revision of the National Security Strategy, or the long-term guideline, and two other key documents on defense, a national security panel of the ruling LDP sought to use stronger wording in describing China as security threat, together with Russia and North Korea, Kyodo reported.

Liu noted this was the first time since WWII that Japan has taken such strategic positioning toward its neighbors. “This is a blatant provocation, taking China as a main threat and changing the direction of Japan’s national policy. It is very dangerous,” Liu warned.

The push for a constitutional amendment by the LDP has sparked wide opposition in Japan.

On Monday, an assembly to oppose the amendment of Article 9 was held at a hall of the House of Representatives in Tokyo. The attendees included local residents, scholars, journalists, professors and artists. The assembly was opposed to the Japanese government using the Russia-Ukraine conflict as an excuse to strengthen Japan’s defense ability.

“The only way to maintain peace in Japan is to hold the Article 9 high,” said the organizer of the assembly. Another attendee said increasing the military budget would decrease the spending on social welfare, nursing and education which are closely related to the people’s livelihood in Japan.

The devaluation of the yen and rising prices have prompted increasing complaints from the Japanese public over the current administration, and against this backdrop, it is not easy for the LDP and other pro-constitution amendment forces to gain a landslide victory in the July 10 House of Councilors election, Liu said.

The Yomiuri Shimbun also reported Tuesday that Kishida is mulling meeting with South Korean President Yoon Suk-yeol, Australian Prime Minister Anthony Albanese and New Zealand Prime Minister Jacinda Ardern on the sideline of the NATO summit, and said that the leaders are expected to express their unity in “opposing unilateral attempts to change the status quo in the East and South China Seas, with Beijing in mind.”

According to Nihon Keizai Shimbun, Kishida will call on heads of state at the NATO summit to turn their attention to Asia, declaring that Japan will “fundamentally reinforce Japan’s defense capabilities within the next five years,” and promote the Japan-US alliance to a higher level.

Kazuyuki Hamada, the President of Research Institute for Future Technologies, and former Parliamentary Vice Minister for Foreign Affairs, told the Global Times in an exclusive interview that Kishida seems to be consolidating his stance that a “expanded NATO” is indispensable, and it is against the times to propose a “global NATO” that will lead to a new cold war or hot war.

“Japan’s advocacy of ‘Asian NATO’ or ‘global NATO,’ and the realization of it, is nothing more than going against the post-Cold War era.” Hamada said. “This unnecessarily intensifies the arms race and reduces the value of diplomacy.”

The issue of providing support to Pacific island nations over which China is increasing its influence is also expected to be on the agenda, according to the Yomiuri Shimbun report.

Liu warned that the summit consisted of the NATO members plus the four countries from the Asia-Pacific region could be institutionalized, which means the aggressive alliance between the US, European countries and Japan began to take shape, weaving the military net against China.

Da Zhigang, director of the Institute of Northeast Asian Studies at Heilongjiang Provincial Academy of Social Sciences, pointed out the “backscratching” relationship between the US and Japan in the Asia-Pacific region. The US has been indulging Japan’s ambitions of getting rid of bondage of military development under the current Japanese constitution as the US hopes Japan can contain China in the Asia-Pacific region, Da said.

Japan is trying to use the confrontation between China and the US to achieve its purpose of completely unleashing its military and political restrictions, Da said.

Japan believes that the strategic contradictions between China and the US are irreconcilable, and it wants to take advantage of this opportunity to try to revise the constitution and forge an international violent multilateral alliance with introducing the strength of NATO to the region, Liu said.