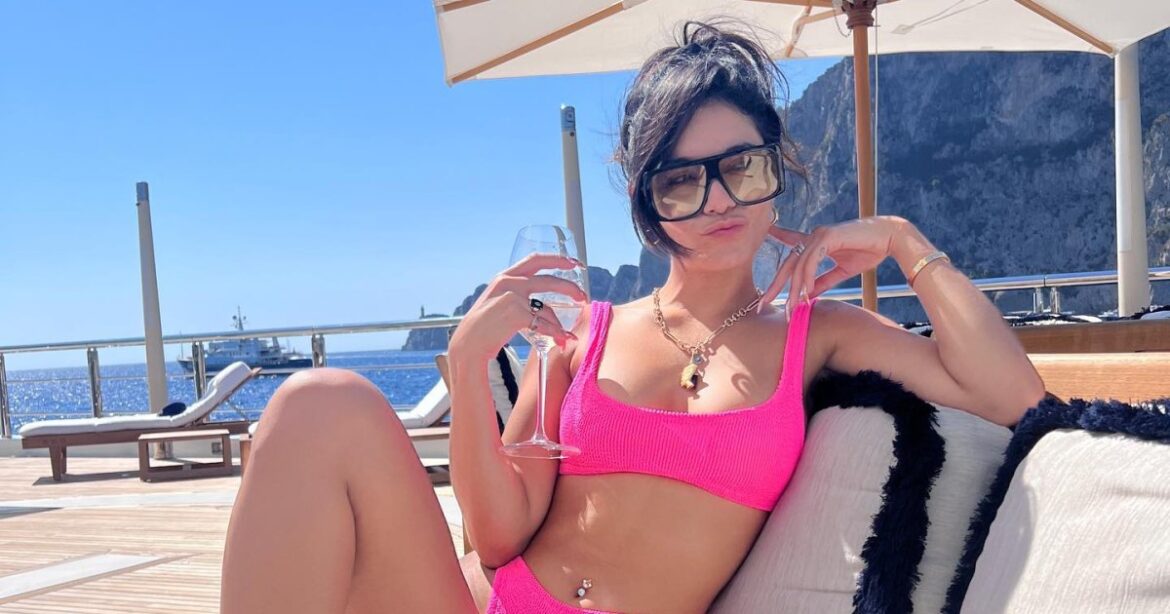 The only thing Vanessa Hudgens loves as much as her boyfriend, Cole Tucker, and the Coachella Music Festival is bikinis! She lives for wearing sexy two-pieces and sharing the photos with her Instagram followers.

‘Vanessa has told fans, “If the waters warm, you know where to find me,” as she relaxed in the ocean during a tropical vacation in one swimsuit snapshot. The Princess Switch star is a big fan of the Turks and Caicos in the Caribbean, Cabo San Lucas, Mexico, and even summers abroad in the Mediterranean.

The actress also doesn’t mind staying at home for some sun and fun. She’s posted numerous photos over the years from her backyard pool, where the starlet uses bikini snapshots to wish fans a “Happy weekend” and other positive messages.

Vanessa has officially turned into a bikini designer, as she partnered up with the athleisurewear brand Fabletics to release “The Sun-Daze Collection.” She told fans about the project in an April 2022 Instagram carousel post while wearing the items, one of which was a tan string bikini with a black and neon green leopard print. “This has been months in the making and now you can OFFICIALLY go check it out,” she told her 43.5 million Instagram followers.

“I wanted this collection to be something you can wear out with friends, while working out, sitting poolside, doing your errands and everything in between! Each style, color, fabric, buttons, patches and so on are all hand-picked by me, and I hope you love them as much as I do,” Vanessa gushed.

The Bad Boys for Life star is fan of mixing toning workouts like Pilates and hot yoga along with cardio to keep her fab bikini figure. “My body builds muscle very quickly and I don’t love the way it looks on my body. So, I find the way that I achieve the body that I want for myself is to lengthen, to lean and to tone,” she revealed in a June 2019 interview with Parade.

“And some days when I have the time, I love doing Pilates first and then going over to Soul Cycle. I love a double up! I always feel so accomplished when I double up,” she added. No wonder Vanessa looks so great in a bikini!