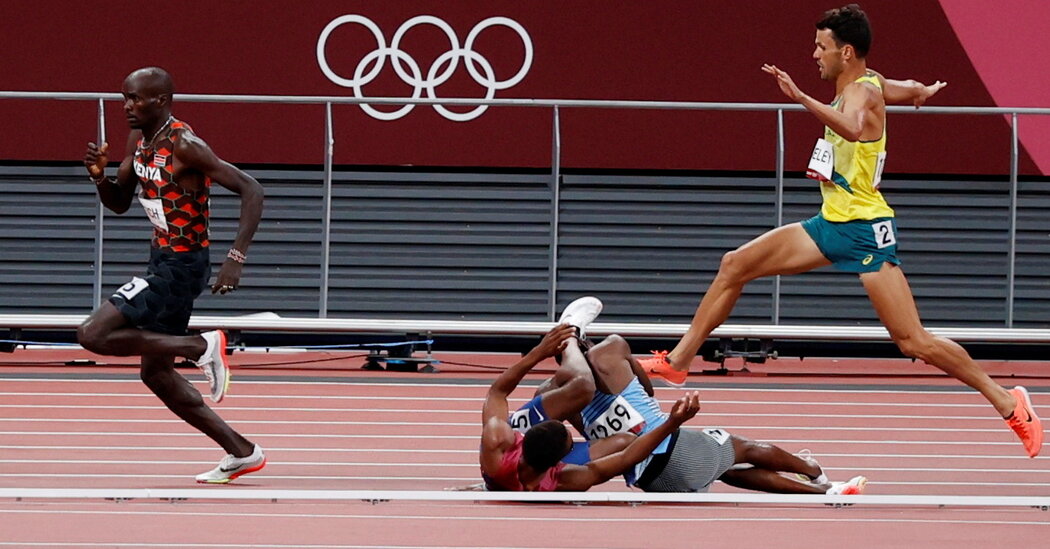 For every sweat-soaked victory on the track at the Olympic Stadium in Tokyo, there were a lot of hopes dashed in a single misstep.

Trips in particular — a sprinter who miscalculated ahead of a hurdle, a runner tangled up in a tight pack — elicited gasps from the few spectators allowed in the stadium.

One of the runners whose Olympic journey ended facedown on the track was Isaiah Jewett, an effervescent 24-year-old from California. He won the 800-meter N.C.A.A. title in June and qualified for his first Olympic Games later that month by running his personal best time and shocking Donavan Brazier in the process.

Jewett was in third place as he rounded the final curve of the semifinal in the 800-meter race in Tokyo, positioning himself for a final sprint to qualify for the next round.

“I was executing my race very well, and I was super happy about that,” he said.

But in that final curve, Jewett and Nijel Amos of Botswana went down hard. They paused on the track as other runners hurdled over them.

“As soon as I fell, I was like, ‘This isn’t me.’ I thought someone else fell,” Jewett said.

Jewett’s experience is a nightmare for any athlete, and it’s one that Dr. Jessica Bartley, the director of mental health services for the U.S. Olympic and Paralympic Committee, encourages athletes to confront before their races.

“How do I celebrate it if I make it, and what am I going to do if I don’t?” Bartley has athletes ask themselves before preliminary heats.

Jewett was feeling great after his first round. He sounded ecstatic weeks later over the phone, recounting how surreal it was to race against competitors he had seen only on television. He’d always had big dreams, he said, so his eyes were on the gold medal.

Athletes have long had to contend with plenty of what-ifs. Some athletes will accomplish their wildest goals, while others will have a bad day on what is supposed to be their best day. Even a really, really great day can lead to overwhelming heartbreak.

Rai Benjamin of the United States ran the race of his life — breaking the world record in the 400-meter hurdles — only to place second to Karsten Warholm of Norway, who also shattered the world record. Benjamin was in tears after the race. Noah Lyles, a celebrated American sprinter, won the bronze medal in the 200-meter dash. He, too, was overwhelmed and in tears while speaking with members of the media after the race.

So how can athletes be supported when some inevitably fail to reach their goals? It’s a question that Bartley faced in September 2020 when she was hired to design a larger mental health care support system for the U.S. delegation. As more Olympians open up about the pressure and anguish that come with performing at the highest level of their sport, more have welcomed different types of support.

For the first time, all U.S. Olympic athletes went through mental health screening before the Games this year. And there was a team of mental health care providers in Tokyo assigned to respond to a crisis or trauma at a moment’s notice.

But just as victory can be followed by heartbreak, a tragedy can turn into something greater for athletes on the track.

For Jewett, that meant looking to lessons learned from his favorite anime characters. He spoke about the perseverance, the heroics and the dogged determination to get up again and again.

“I could feel myself start to get down,” he said, thinking back to his fall on Aug. 1, “but for some reason I looked over at the other competitor and saw the defeat on his face, and the hero I wanted to be came out. So I said, ‘Let’s get up and finish this race.’”

When asked how he was able to move through those emotions so quickly, Jewett paused.

Jewett extended his hand, and he and Amos helped each other up to jog the final 150 meters together.

The memory of his fall is still a hard pill to swallow at times, Jewett said. But in some ways, it was even better than a win. President Biden and the first lady, Jill Biden, called him a hero. His name is perhaps better known now than if he had made it to the podium. And he has become an inspiration for athletes looking for an example of how to bounce back after a major disappointment.

“If you are giving everything you have, you don’t have anything to regret,” Jewett said plainly. “Yes, it might turn out differently than expected, but that’s life.”

“At the end of the day heroes fall all the time,” he said, “but legends always get up.”