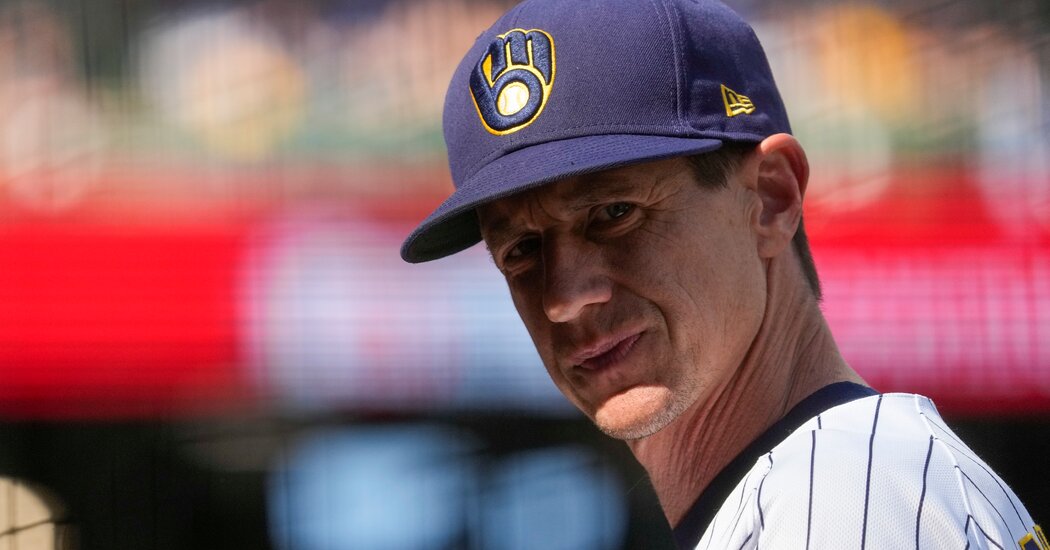 MILWAUKEE — The last time the Milwaukee Brewers reached a World Series, Craig Counsell was 12. His father worked for the team, so Counsell would often tag along, including during that 1982 playoff run.

Usually, Counsell sat in the stands at County Stadium, the Brewers’ former home, to watch his favorite team and favorite player, the Hall of Famer Robin Yount. But when tension built during a game, Counsell would walk to a special place that had proven successful in his mind: the spot where he watched Cecil Cooper drive in the go-ahead runs to win the American League pennant for Milwaukee.

“My lucky spot was at the end of the stadium,” Counsell said recently, pointing to where it would be at American Family Field, the team’s home since 2001. “They had a ramp that sat down the right field line. It was a walkway to get to the upper deck and I would watch the game from my spot. You got to find a lucky spot.”

His vantage point is much different these days. After playing 16 seasons in the majors, Counsell — a Milwaukeean through and through — has been watching his favorite team from the dugout since 2015. All the while, he has established himself as one baseball’s best managers. This season, he has guided the Brewers to multiple milestones the team had not reached since 1982, when Counsell was there to watch them fall to the St. Louis Cardinals in Game 7 of the World Series.

Through Tuesday, the Brewers, who play in the smallest market in Major League Baseball, were on pace to win a franchise record 99 games. They sat 13 and a half games ahead of the St. Louis Cardinals for first place in the National League Central, holding the largest division lead in M.L.B. With a record of 89-56, the Brewers were 33 games over .500 — topping the franchise’s high-water mark from 1982. And should the Brewers reach the playoffs as expected, they will have done so in four consecutive seasons, extending a franchise record for a club that played its first season in 1969.

A common thread on a team that has seen changes to its front office and roster: Counsell.

“The players have to play the game, but it starts from the top down and players feed off the manager,” said Brewers outfielder Christian Yelich, who won the National League’s Most Valuable Player Award in 2018.

“I don’t think he gets enough credit,” Yelich continued later. “I really don’t. It’s almost a crime that he hasn’t won Manager of the Year the last few years. He’s definitely deserved it and he’s a huge reason for all of our success here.”

Counsell, 51, took over the Brewers after Milwaukee got off to a 7-18 start under Ron Roenicke in 2015. Before that, his coaching was limited to youth leagues with his children. But his experiences as a player prepared him to guide a team, to relate to its players and to earn their respect.

He went from a walk-on at Notre Dame to becoming the team’s captain. An 11th round draft pick, he was a slender infielder known more for his glove (and quirky batting stance) than his bat. In 1997, when he was 26, he overcame a history of injuries in the minors to earn a regular spot in the majors. He was designated for assignment, released and traded during his career. He won World Series rings with the Florida Marlins in 1997 (scoring the winning run in Game 7 against Cleveland) and the Arizona Diamondbacks in 2001 (when he was the M.V.P. of the league championship series and part of the team’s winning rally in Game 7 of the World Series against the Yankees).

“He has a really good feel for the ball club,” said Brent Suter, a Brewers left-handed reliever. “When we come home from road trips, he cuts down on work. Or he adds work when its necessary. He has a really good pulse energy wise, like when he needs to talk — speeches to the team — or when he needs to let the club be. That’s somewhat instinctual, but it also comes from playing for 15 whatever years in the big leagues.”

Although Counsell said he wasn’t thinking about it much while playing, the former Brewers General Manager Doug Melvin said others often viewed Counsell as a potential manager because of his experience, personality and intelligence.

“You can put all of that down on a list, but the one thing that stood out is the respect that he had of all his teammates,” Melvin said. “Whenever I talked to people in the game, he was always one of the most well respected teammates who would not accept anything less than trying to win every day.”

The thought of managing crossed Counsell’s mind more in 2011, his final season on the field, when he was 41, hitting .178 for the Brewers and, in his estimation, was “a really bad player.” He remained on Milwaukee’s roster partly because Melvin valued Counsell’s impact in the clubhouse.

Counsell didn’t know how long it would take for him to become a manager or if it would happen. His goal was to serve in a leadership position for an organization, but his loyalties were with his hometown team.

“I felt that it would be my part to help baseball in Milwaukee moving forward after I was done playing,” he said. “I didn’t know that it was going to be this necessarily. I feel really fortunate it is. I’ve always felt a responsibility for it and enjoy that responsibility.”

Counsell grew up in Whitefish Bay, a community 15 minutes north of the Brewers’ stadium, and still lives there. He is a proud graduate of Whitefish Bay High, where he met his future wife and all four of their children will end up attending. His high school’s field, and the Little League park where he once played, both bear his name. His No. 19 jersey number was retired.

He played for the Brewers for six seasons. After retiring, he returned in 2012 as a special assistant to Melvin in the front office. Three years later, Melvin hired Counsell as manager.

“He knows how important the Brewers are to Milwaukee,” said Jeff Margolis, who grew up with Counsell and was the best man at his wedding. He added later, “For as much as it would mean for anybody to be the manager of the Brewers, it means more to Craig.”

Calling Counsell “a Midwest kid,” Margolis said Counsell still trims his lawn with a riding mower given to him by the Hall of Fame closer Trevor Hoffman, a former teammate. A few years ago, Counsell stopped by his 30th high school reunion after a day game in Milwaukee.

On the field, Counsell has earned praise for both his tactical and his interpersonal skills, the latter of which is more important nowadays as front offices have an increasingly larger role in how games are played. Underscoring the turnover of the demanding position, Counsell is the longest tenured manager in the N.L.

Josh Hader, one of the Brewers’ star relievers, said Counsell “doesn’t try to over-manage.” Corbin Burnes, one of the Brewers’ ace starters and a leading candidate to claim the N.L. Cy Young Award, said he appreciates Counsell’s direct and open manner of communication. Suter said Counsell has great situational awareness and foresight in how to deploy relievers and pinch-hitters throughout a game.

“I’ve coached for 40 years in all different settings and, on paper, it looks like I’ve had a lot of success,” said Pat Murphy, Counsell’s former coach at Notre Dame and his bench coach with the Brewers since 2016. “But this guy has taught me so much about the major-league game and a lot of things. It’s supposed to be the other way around, right?”

Without his time working in the front office, in which he said Melvin exposed him to every facet, Counsell said he wouldn’t understand the perspectives of David Stearns, the team’s current president of baseball of operations, or Matt Arnold, the team’s general manager.

“One of the reasons I’ve enjoyed working with Craig so much is that he has the ability to question everything that he does and that we do as an organization,” Stearns said. “And through active questioning and discussion, he has naturally grown and altered his opinions on certain aspects of how he goes about it. But the general tenets of what he believes and strives to do is put players in the best position to succeed. That has been constant since day one.”

Case in point: The Brewers of 2021 are dominated by a fairly traditional starting rotation, a sharp contrast from 2018 when the team, carried by a dominant bullpen and Yelich, fell one win short of reaching the World Series.

“In 2018, we had a team and particularly a pitching staff that required very active management pretty much from pitch one, and Craig understood that and tailored his style to that,” Stearns said. “The team we have right now is built more around elite starting pitchers, and Craig has been able to tailor his management style to that and continue to put the pieces on our roster in the right spots.”

Counsell, who has twice been the runner-up for the N.L. Manager of the Year Award and faces stiff competition for it this year from Gabe Kapler of the San Francisco Giants, said he loved managing because it gave him a unique perspective on watching players like Freddy Peralta, Brandon Woodruff, Burnes and Hader reach the major leagues and develop into stars.

Woodruff, Burnes and Hader were key figures on the 2018 team that was so close to a pennant. Counsell said that squad is remembered fondly in Milwaukee because of the journey it took fans on — something he said baseball excels at in October. That team also provided new memories to a fan base that, from 1983 until Stearns took over in 2015, had seen their favorite team make the playoffs only twice, in 2008 and 2011.

Counsell lamented that the Brewers, one of six franchises never to win a championship, have not returned to the World Series since 1982. He still thinks about that team, too. But one day, he hopes to gives Brewers fans newer memories to hold onto for life.

“The fact that you’ve seen those moments and been a small part of them as a fan,” he said, “it frankly makes you want to provide those moments for other fans because they don’t go away.”