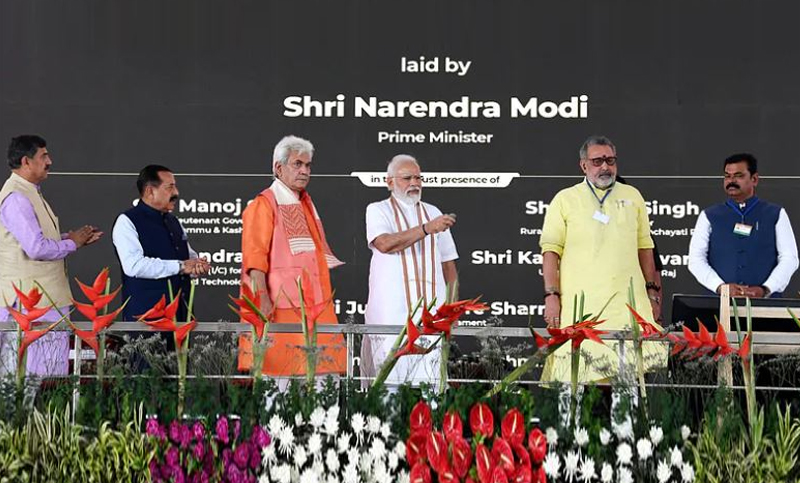 For the first time since the revocation of Kashmir’s special status in 2019, Indian Prime Minister Narendra Modi has visited Kashmir and inaugurated a major power project. He promised peace and development in Jammu and Kashmir.

The Modi-led Hindu nationalist government is looking for a way to control the long-running movement in Muslim-majority Indian-administered Kashmir. Strict security measures were taken in the rural areas of Jammu on the occasion of Modi’s arrival.

The Jammu region of the former state of Jammu and Kashmir has a Hindu majority. As a defense against the separatist movement in Kashmir, direct rule of the Center was introduced in 2019 by dividing the state in two.

Inaugurating the new road and hydropower project, Modi told thousands of people that his government was leading the troubled region to prosperity. He said, “I would like to say to the youth of this valley that the present generation should not have to face the same difficulties and hardships that their parents and grandparents faced. ‘

Before Modi inaugurated the Rs 20,000 crore power project, Lieutenant Governor of Jammu and Kashmir Manoj Sinha said, “There has been an investment of Rs 15,000 crore since independence. And we have a proposal to expand the project up to 52 thousand crore rupees. Shortly afterwards, he said, “We are hoping that projects up to Rs 70,000 crore will be undertaken.” ‘

The hydropower project inaugurated by Modi has a capacity of 650 MW. He also laid the foundation stone of another 540 MW hydropower project. Both the projects will be constructed on the Chenab river in Kishtwar district.

Protests erupted in Muzaffarabad in Pakistan-controlled Kashmir against Modi’s visit to Jammu and Kashmir.

This is the first visit of the Indian Prime Minister to Kashmir since the Indian security forces launched a crackdown on the region in 2019.

New Delhi declared the abolition of special limited autonomy of protected Kashmir through Article 370 of the Constitution in 2019. The status of the state was abolished and it was turned into two Union Territories. Thousands were arrested. At present, Jammu and Kashmir is India’s most heavily deployed territory. In all, there are more than half a million members of the army and paramilitary forces deployed throughout the region. Source: Hindustan Times, AFP