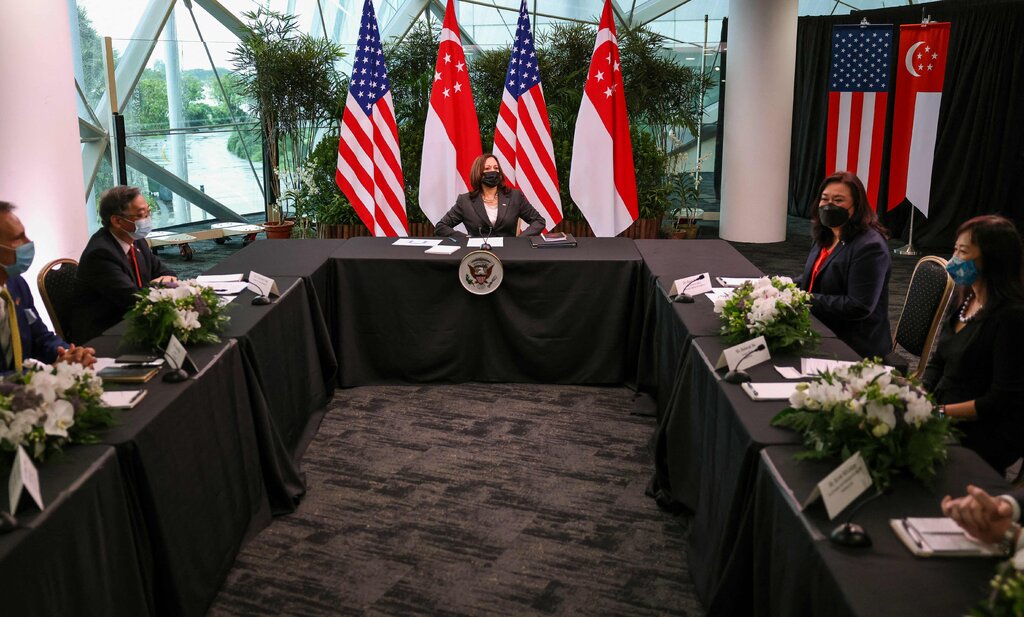 The vice president rebuked China and sought to fortify the image of the United States as a credible ally amid growing questions about Afghanistan.

SINGAPORE — Vice President Kamala Harris sought to fortify the image of the United States as a credible ally by offering a sharp rebuke of China during an address on Tuesday in Southeast Asia. Her effort comes as the White House faces growing questions about its reliability as an international partner amid ongoing violence in Taliban-controlled Afghanistan.

“In the South China Sea, we know that Beijing continues to coerce, to intimidate and to make claims to the vast majority of the South China Sea,” Ms. Harris said in Singapore. She added that China’s “unlawful claims” had continued “to undermine the rules-based order and threaten the sovereignty of nations.”

The White House is aiming to refocus U.S. foreign policy strategy on competing with China’s rising economic influence rather than on continuing to fight “forever wars,” such as the two-decade long conflict in Afghanistan. The chaotic effort to evacuate Americans and Afghan allies from Kabul has overshadowed the vice president’s trip, which began on Sunday in Singapore and will take her to Vietnam.

Ms. Harris’s overseas trip, her second as vice president, gained heightened urgency in the days before she boarded Air Force Two. The journey had been seen as a chance to bolster economic and security ties with key partners in Singapore and Vietnam, a crucial piece of President Biden’s strategy in the South China Sea. But in the wake of the haphazard withdrawal from Afghanistan, her trip became the administration’s first test of the White House efforts to reassure the world that it can still be a trusted international partner.

For Ms. Harris, that has meant reassuring nations in the South China Sea of the administration’s credibility while confronting questions about whether the United States had abandoned its allies in Afghanistan.

A military plane taking off from Kabul, Afghanistan, on Tuesday. The chaotic effort to evacuate Americans and Afghan allies from Kabul has overshadowed the vice president’s trip to Southeast Asia.Credit…Jim Huylebroek for The New York Times
That pressure is likely to increase when Ms. Harris arrives in Vietnam. Her senior aides have faced questions about the historical parallel between the U.S. evacuation of American citizens in 1975 from Saigon and the situation in Kabul — replete with scenes of desperate Afghans running behind U.S. military planes, and of American citizens, Afghan allies and their relatives crowded into the Kabul airport and stuck in limbo.

But in Singapore, Ms. Harris has pressed on with her message.

“I am standing here because of our commitment to a longstanding relationship, which is an enduring relationship, with the Indo-Pacific region, with Southeast Asian countries and, in particular, with Singapore,” the vice president said a day earlier alongside Prime Minister Lee Hsien Loong of Singapore during a news conference dominated by questions about Afghanistan. She said that the administration was “singularly focused” on evacuating Americans and Afghan allies from the country.

In a sign of how vast a shadow the situation in Afghanistan had cast over the trip, even Mr. Lee was asked by one of the two local reporters about the U.S. withdrawal.