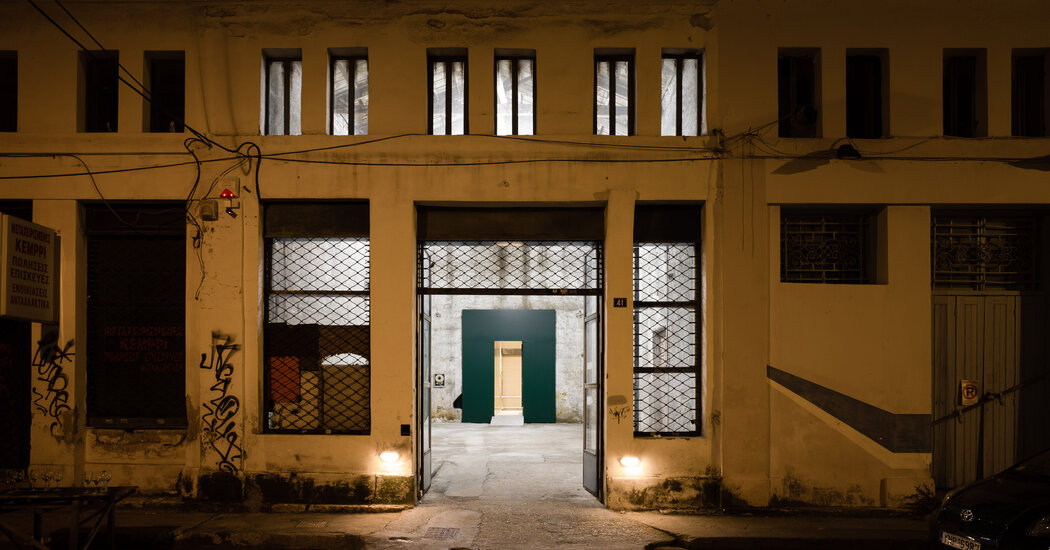 On an exceptionally hot July evening, a crowd was mingling and drinking wine at an art opening on Polidefkous Street. An unassuming thoroughfare lined with low-slung ship-repair and metal workshops in Piraeus, the industrial port city on Athens’s southeast side, it is not a place where galleries have historically set up shop. But despite the derelict-looking buildings and the distance from Syntagma Square, the capital’s stately center, a 25-minute taxi ride away, the scene — like one from Martin Scorsese’s 1985 film, “After Hours,” which depicts the gritty but heady SoHo, Manhattan, of its time — exuded a zeitgeist-y glamour. A sense of possibility filled the air. Indeed, Rodeo, the night’s gathering spot and one of the most respected and progressive contemporary galleries in the greater Athens area, is among a handful of creative forces that are transforming the Agios Dionysios district of Piraeus, not far from the ferry docks, into one of the capital’s most exciting cultural destinations.

Athens’s current reputation as an up-and-coming art hub was sealed in 2017, when the Documenta art fair chose the city to serve, along with Kassel, Germany, as a host of its much-anticipated quinquennial exhibition. The move wasn’t without controversy; just two years before, Greece had defaulted on its debt to the I.M.F. But in addition to the city’s low rents and cost of living, which have both been magnified by the country’s economic crisis, the fair made Athens ripe for an influx of international artists and designers looking for an alternative to rapidly gentrifying European capitals like Berlin and Lisbon.

The city’s appeal to creative types is about more than that, though, says Elena Mavromichali, 49, an art historian and cultural adviser for the Greek government, “I’m seeing a dynamic movement of contemporary artists inspired by and engaging with Greece’s ancient history and its archaeological sites.” She adds that Athens is currently working to better connect its city center to its seafront, of which Piraeus — a more than four-square-mile area that dates back to the early fifth century B.C. — is a large part. (A new metro line, scheduled to be completed before next summer, will take riders from Athens airport to the port in just over 20 minutes.) Mavromichali, who was born and raised in the Kastella neighborhood of Piraeus, says she’s excited to see both large institutions like the Stavros Niarchos Foundation Cultural Center, designed by Renzo Piano and opened near Piraeus in 2016, and smaller entities bring new energy and new communities to manufacturing neighborhoods whose economies had been suffering for the last several decades. And she hopes the area will manage to avoid the typical pitfalls of gentrification — the displacement of longtime residents and the loss of affordable housing — by collaborating, she says, with a “variety of stakeholders including grass-roots initiatives.”

Inside Rodeo’s raw, loftlike 1,600-square-foot space was a solo exhibition of new pieces by the Cypriot conceptual artist Christodoulos Panayiotou, known for multimedia work that often questions perceived notions of cultural and national identities. A piped red awning (his work “Awning,” 2021) jutted out from a rough concrete wall. Beyond a hallway was an installation consisting of a false brick facade, called “The Fourth Wall” (2021), that cut off the back half of the gallery and seemed to ask viewers to take a closer look at their environment: What was real and what was false? Was this building — this street — really as fragile and temporary as a theater set? Alone in a room on the other side of this divide, which could be entered through the gallery’s back door, was “Horseweed” (2021), a four-foot-tall silver sculpture of a flowering horseweed, a North American plant that has become an invasive species in Eurasia, that appeared to be growing up through the floor.

In front of the building, Panayiotou was chatting with the Greek gallerist Sylvia Kouvali, 40, Rodeo’s founder. Kouvali, who also has an outpost in London that she opened in 2014, moved her original space — formerly based in a tobacco warehouse in Istanbul — to Piraeus in 2018. While she loved Istanbul’s contemporary art scene, Turkey’s worsening political instability all but forced her to leave and she eventually returned to Athens. “At first, I considered a rural location,” she says, “but then I decided that Piraeus, with its sea and boats and industrial zone and history, was an interesting choice.” At the time, there was nothing on Polidefkous Street except warehouses and Paleo, a casual but buzzy restaurant serving seasonal Mediterranean-inspired small plates and artisanal wines opened in 2016 by the acclaimed restaurateur Giannis Kaimenakis. “Everyone thought I was crazy,” he told me of choosing Piraeus. “But from the beginning I thought there was something beautiful about being among people repairing ships and engines not far from the harbor.”

By 9 p.m., many of the gallery’s visitors were seated around a dozen tables on the street outside, which were being overseen by Paleo’s staff; plates of thickly sliced tomatoes topped with sea salt and fresh mozzarella and a luscious eggplant salad were served family-style. “There’s Stelios Kois,” whispered one guest, nodding toward the Greek architect, who had just finished designing Delta, the new restaurant in the Stavros Niarchos Foundation Cultural Center, which sits about three miles to the east and was, its co-president Andreas Dracopoulos later told me, “created as a symbol — and a very real engine — of hope for Greece in the depths of the country’s punishing socioeconomic crisis.” Locating it near Piraeus, he added, was “part of realizing that vision.”

Leonidas Trampoukis, 39, who, along with his wife, Eleni Petaloti, also 39, runs the architecture office LOT and the design firm Objects of Common Interest, was also in the crowd. The couple have for some time worked out of a studio in Brooklyn but five years ago opened another in central Athens. It was the idea of being closer to their preferred makers and fabricators that drew them to Greece. Now, they are building a production studio in an 8,000-square-foot former factory a few blocks northeast of Rodeo that will focus on a unique technique for casting acrylic. “We were looking everywhere for a big, affordable raw industrial space and we decided on Piraeus because of the vibe and the community,” Trampoukis explained. They hope to collaborate with local makers, experiment with larger-scale work and possibly fabricate pieces for other designers and artists.

This month, a solo show of their sculptural wood-and-acrylic tube lights is up at Carwan, an avant-garde design gallery that relocated last year from Beirut to a late-19th-century commercial warehouse next door to Rodeo. Nicolas Bellavance-Lecompte, 41, who co-owns the space with his business partner, the French architect Quentin Moyse, 33, had been contemplating Athens as a possible home for the gallery since visiting the city during Documenta; he found that the industrial architectural landscape and the animated, transitory atmosphere of Piraeus, in particular, reminded him of Beirut’s port. “We were very fortunate that we moved out at the end of 2019 before the explosion there,” said Bellavance-Lecompte, “but we already felt a crisis coming and at the same time, our client base was becoming more and more global.” Collectors have found Greece easier to reach than Lebanon, and shipping works in and out of the country has proved more straightforward.

At one point in the evening, Suzanna Laskaridis joined my table. The 39-year-old entrepreneur, whose family owns the Laskaridis shipping company, has strong roots in Piraeus. Both the clan’s Aikaterini Laskaridis Foundation, launched in 2007, and her two-year-old production, research and development company, Blue Cycle, are based in the port. The latter — which is housed in a 7,000-square-foot former factory complex that belonged to the Piraeus Gas Company until the early 20th century — collects discarded plastic, generated primarily by the shipping and fishing industries, from the Aegean Sea. That waste is then transformed into filaments or pellets that the company uses as materials for manufacturing objects ranging from colorful terrazzo-style tiles to modern outdoor furniture.

After we stopped by the Intermission, a nearby contemporary art space opened by the Los Angeles- and Athens-based art adviser Artemis Baltoyanni in 2019, Laskaridis took me on a tour of her facility, a five-minute walk away. As we made our way through various buildings, she excitedly described the myriad possible applications for upcycled plastic and her hope that Blue Cycle will not only recycle the waste of the past but also use it to create a more sustainable future, both in environmental and financial terms. “I would love to show that this model of circular economy can work and put Greece on the map for innovation,” she said. In the main laboratory, she pointed out a huge robotic arm, created by the Greek makers behind the Rotterdam-based design studio The New Raw, with a span of more than eight feet. It stood motionless behind a glass window, ready to make a futuristic-looking vase, perhaps, or a sculptural sun lounger from the plastic nets collected from a nearby harbor. On that night, the future of Piraeus seemed full of optimism and creative possibilities.