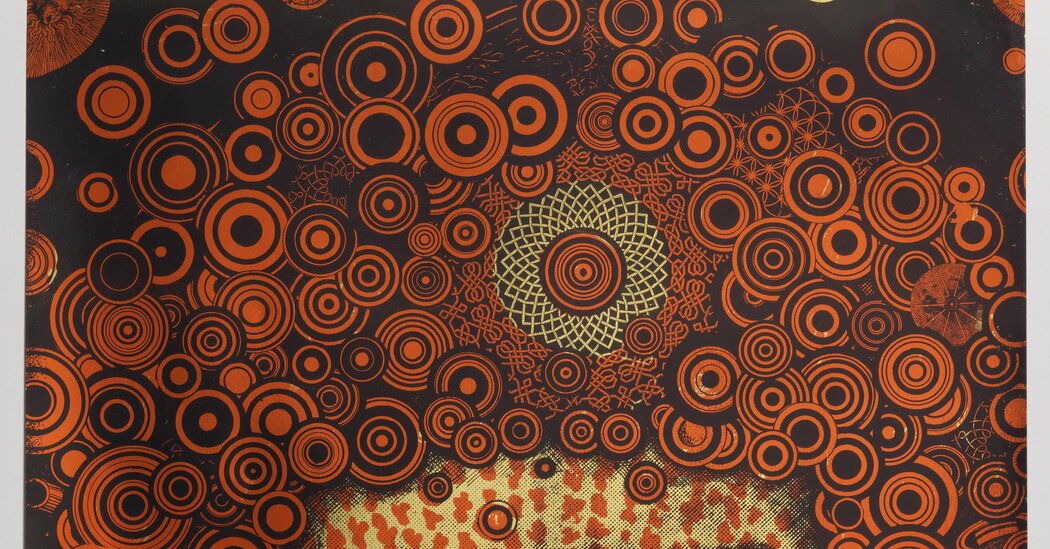 “The Clamor of Ornament,” a dazzling new exhibition at the Drawing Center, gathers nearly 200 drawings, etchings, photographs, tunics and weavings to tell a complicated story, one that spans five centuries, about cultural exchange and appropriation.

The curators define ornament as “embellishment, surface or structural, that can be lifted from its context, reworked, reproduced, and redeployed.” This wide-open description gives them space to include nearly anything, and they do: There are Albrecht Dürer woodcuts from the early 1500s, a bark painting by an anonymous Papua New Guinean artist, a series of black-and-white cakes and pastries that the illustrator Tom Hovey drew for a coloring book version of “The Great British Bake Off.”

An ingenious exhibition design lets you imagine these squiggles and frills leaping around the world as if totally weightless. One of the Dürers, a lacy roundel inspired by Leonardo da Vinci’s drawing of an Ottoman design, hangs next to a 1968 poster of Bob Dylan with a similar circle on his forehead; elsewhere, in a series of 19th-century watercolors and woodblock prints, textile patterns ricochet between India, Europe and Japan.

There’s nothing wrong with the roundel on Dylan’s forehead, of course, nor with the other circles that the designer Martin Sharp used to depict the musician’s hair. But in the 19th century, when such patterns were all the rage in Western Europe, they were associated with racist notions of “the Orient” — a fantasy constructed to romanticize the very people those Europeans were conquering and robbing.

You can see the romance in Joseph-Philibert Girault de Prangey’s beguiling silver daguerreotype of an Egyptian mosque or in a drawing, attributed to the Persian court architect Mirza Akbar, of the kind of intricate tile work that inspired the English architect Owen Jones to write a prescriptive book-length study of artistic and architectural ornamentation. (Jones’s book “The Grammar of Ornament,” published in 1856, is the inspiration for the exhibition’s title.)

“Clamor of Ornament” offers evidence, too, of the ruthlessness of industrialization as well as of colonialism — at least as it showed up in art. There’s the drawing of “the Red Fort, Delhi, Furnished According to English Taste”; the stylized Kashmiri mango ripped off by textile mills in the Scottish town of Paisley; the American flag included in a Navajo weaving made after the Navajo had been confined to a reservation where they had to import wool. (In her erudite catalog essay, Emily King, a co-curator of the exhibition, quotes the economic historian Kazuo Kobayashi as saying that cottons manufactured in India “were the most important trades in exchange for African slaves.”)

You see people using appropriation to push back against oppression and cultural erasure, too. But none of these exchanges are simple. The Harlem designer Dapper Dan, appearing here via several photographs, pioneered a new vision of Black style that borrowed corporate and fashion logos — an innovation that was itself later appropriated by those very corporations. The artist Wendy Red Star annotates historical photos of Crow diplomats, restoring significance to feathers and hair bows that contemporaneous white Americans belittled and misunderstood. But that significance comes with a kind of violence of its own. One hair bow, she writes, represents “physically overcoming an enemy and slitting his throat.”

In the end, the exhibition doesn’t make any one argument so much as it presents a whole host of them — a conceptual clamor that deepens and amplifies the already overwhelming visual experience. On the one hand, as arguments about cultural appropriation grow ever more heated and lose ever more nuance, we desperately need reminders like this of how difficult it still is to disentangle the realities. On the other hand, as a visitor to the exhibition, I ended up engaging in some decontextualizing of my own, tuning out the snazzy but informative wall labels, designed by Studio Frith, and focusing instead on the sheer sensual pleasures of an air-conditioned gallery filled with an extraordinary collection of beautiful objects.

Some people may be drawn to the bold colors of Emma Pettway’s Gee’s Bend quilt (2021), Toyohara Kunichika’s 1864 woodblock series “Flowers of Edo: Five Young Men,” or the temporary wall covered in an 18th-century French pattern called “Reveillon Arabesque 810.” But I found myself gravitating toward the simpler, monochrome certainties of John Maeda’s trippy typographical posters; of a zigzagged “Tapa Cloth Fragment” from Oceania; or of a specimen of 19th-century scrimshaw. Barely six inches long, the engraved bone shows a densely crosshatched whale surrounded by distressed sailors as it destroys their whaler. It was heady to consider that the entire little scene, packed with drama and pathos, might be just another patch of free-floating ornament.

The Clamor of Ornament: Exchange, Power, and Joy From the Fifteenth Century to the Present