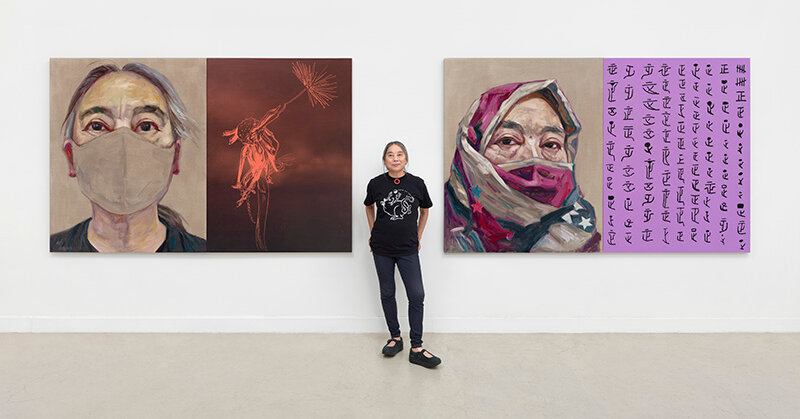 Hung Liu, a Chinese American artist whose work merged past and present, East and West, earning her acclaim in her adopted country and censorship in the land of her birth, died on Aug. 7 at her home in Oakland, Calif. She was 73.

The cause was pancreatic cancer, Nancy Hoffman Gallery, which represents Ms. Liu in New York, said in a statement.

Her death came less than three weeks before the scheduled opening of a career survey, “Hung Liu: Portraits of Promised Lands,” at the National Portrait Gallery in Washington. She was the first Asian American woman to have a solo exhibition there.

“Five-thousand-year-old culture on my back; late-twentieth-century world in my face” is how Ms. Liu described her life-changing arrival in the United States from China in 1984, when she was 36 and already an accomplished painter. Her goal in America, she once said, was “to invent a way of allowing myself to practice as a Chinese artist outside of a Chinese culture.”

As she quickly learned, one problem with being a Chinese artist outside China was the need to deal with, and to counter, cultural expectations. Her very name automatically evoked, for many Western viewers, associations with time-honored but stereotypical “Oriental” art forms like calligraphy and brush-and-ink painting. In addition, at that point, before the arrival of the globalist art wave in the 1990s, the art world in Europe and the United States had little awareness that contemporary Chinese art even existed.

Her work incorporated photo-based images that combined the political and the personal. Many of these images were of figures forgotten by history: laborers, immigrants, prisoners, prostitutes. In some cases, she depicted them wreathed in flowers. There were also portraits of her Chinese family, including one of her father, derived from a snapshot she herself had taken when visiting him in a labor camp.

Her 1988 painting “Resident Alien,” which became her most widely reproduced, is a mural-size depiction of her green card. It includes a realistically rendered self-portrait, but the identifying name on the card has been changed to “Cookie, Fortune” and the birth year from 1948 to 1984, the year she immigrated.

Hung Liu was born on Feb. 17, 1948, in Changchun, in northeast China, during the revolutionary era. When she was a child, her father, a teacher, was imprisoned for his involvement in anti-Communist politics. During the Cultural Revolution, she herself was sent by the government into the countryside to work on farms for “re-education.” While there, she secretly photographed and sketched daily village life.

She also traveled in China, visiting historic sites and, using a pocket-size paint box, making copies of, among other things, murals carved and painted by Buddhist monks from the fifth to the 14th century in caves at Dunhuang, in far western Gansu province.

Restless with the officially sanctioned Socialist Realist style and subjects, she repeatedly applied to the Chinese government for a passport allowing travel to the United States. When permission finally came in 1984, she flew to California and enrolled in the M.F.A. program at the University of California, San Diego.

One of her teachers there was the conceptual artist Allan Kaprow, who had a long familiarity with Asian art and viewed both art and culture as ductile categories. His presence assured a welcoming environment for her aims.

After being awarded a residency at the Capp Street Project, an art space and artist residency in San Francisco, in 1988, Ms. Liu settled permanently in the Bay Area. In 1990 she began a long teaching career at Mills College in Oakland. She retired in 2014.

Her first United States show, in 1985, consisted of drawings she had brought with her of the Dunhuang murals, but the work she began producing in California was quite different.

Her political content became more emphatic in the wake of the 1989 Tiananmen Square massacre. In a mixed-media installation from that year, “Trauma,” the cutout figure of a woman dressed in traditional Chinese robes, with her feet bound, floats on the wall over the body of a fallen student. Hanging on the wall between them is the black silhouette of Mao Zedong’s face. The floor below is splashed with blood-red paint.

In 1994, for the M.H. de Young Memorial Museum in San Francisco, Ms. Liu produced an installation commemorating the Chinese immigrants who died while building the Western portion of the transcontinental railroad. In the 2000s, she began working intensively with non-Chinese sources, basing a series of paintings on documentary pictures of the Great Depression by the American photographer Dorothea Lange. The scenes of rural Dust Bowl destitution captured by Lange reminded her of those she had witnessed, and recorded in drawings, while living among China’s rural poor.

Most of Ms. Liu’s paintings were done in a brushy version of the realist style in which she had been trained. But, skeptical of any claims to veracity in the depiction of history, she routinely covered the surface of her paintings with linseed oil washes, which sent rivulets of transparent liquid running down the canvas. This formal effect has invited varying interpretations: blurred memory, tears, reality as an illusion.

Ms. Liu had several institutional shows in the United States, including the 2013 retrospective “Summoning the Ghosts: The Art of Hung Liu,” which was organized by the Oakland Museum of California and traveled nationally. The exhibition “Hung Liu: Golden Gate” is currently on view at the de Young Museum. The National Portrait Gallery show, which will run through May 30, 2022, is her first major East Coast presentation.

In 2008, when China was loosening culturally, Ms. Liu was given a retrospective at the Xin Beijing gallery. But a 2019 survey scheduled for the UCCA Center for Contemporary Art in Beijing was abruptly canceled by the Chinese government, even after she acceded to its demand to remove pieces that, in light of the pro-democracy protests in Hong Kong, were deemed inflammatory.

Ms. Liu is survived by her husband, the critic and curator Jeff Kelley; a son, Lingchen Kelley; and a grandson.

The image is one of the most unabashedly poetic created by an artist who wrote, in “Ghosts/Seventy Portraits,” a 2020 collection of her work: “When I moved to the West, exactly half a lifetime ago, I carried my ghosts with me. The ghosts I carry are a burden, but also a blessing.”