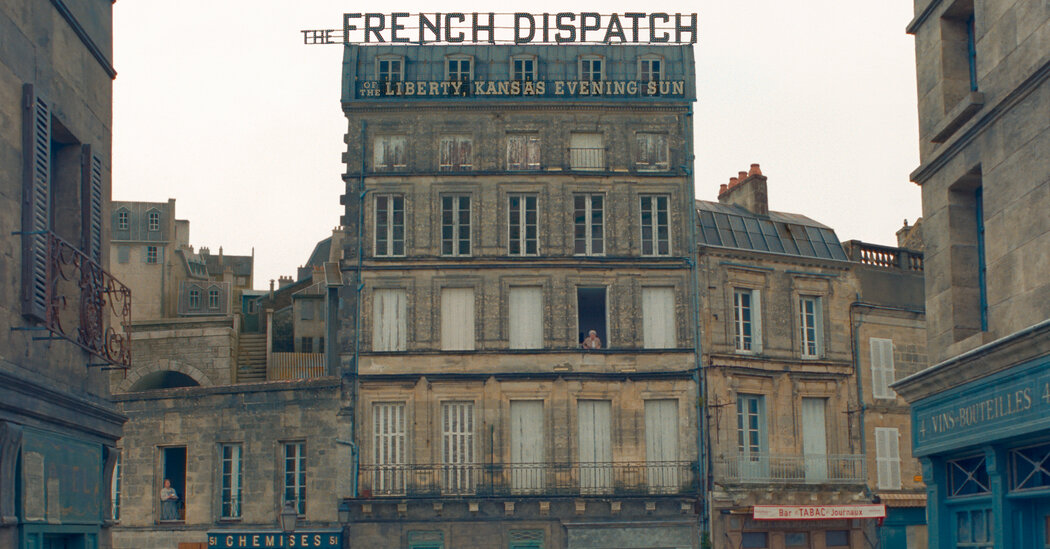 What happens when you combine the cinema of Wes Anderson with a charming, historic French city? You get a stylized version of France that highlights the director’s whimsical passions — like centuries-old buildings reframed in symmetric picture-book ways and neighborhoods accented with quaint and colorful accessories.

“The French Dispatch” is Anderson’s ode to journalism, French cinema and the magic found while winding through the country’s cobblestone streets. It is heavily peppered with distinct, fussed-over design elements that both celebrate and heighten its French aesthetic.

The movie, which is scheduled to be released in theaters on Oct. 22, focuses on an American magazine that is published in the fictional French city of Ennui-sur-Blasé (the name of which is a perfect Andersonian touch). With the death of its longtime editor, Arthur Howitzer Jr. (Bill Murray), the magazine is planning its final issue, and the four stories each get their own dramatization in the film. While the film’s cast is a long list of recognizable names (Tilda Swinton, Benicio Del Toro, Frances McDormand, Jeffrey Wright) one of its biggest stars is the city, showcased in a tour that makes up one of the segments. Rather than creating multiple town exteriors on a backlot, the filmmakers found a real French town, Angoulême, and used it as the movie’s beating heart, dressing it up or down as needed.

One of the film’s producers, Jeremy Dawson, said that Anderson was looking for a place “with nooks and crannies, corridors, passages, staircases, layers and ramparts.” The filmmakers began their scouting search on Google, digitally navigating the streets of towns that might fit the bill. Then they hit the road to visit a few of them. While in Angoulême, they came across a plaza with a small cafe. Dawson recalled that Anderson suggested grabbing lunch at the cafe. “When he said that, I knew he’d picked this town,” Dawson said.

Angoulême, in the southwest of France with a population of about 42,000, is no stranger to invasions; during the Hundred Years’ War, it was the site of battles between the French and English. These visitors were much more benign. During the shoot, the crew came up with various ways to give the town’s old-world collection of buildings, streets and facades a bit of an Andersonized touch — a cute little vintage vehicle parked here, a peppy striped awning set up there. And sometimes miniatures were used to help enhance the setting.

For an establishing shot of the French Dispatch headquarters, the filmmakers chose one building on a block of similar-styled structures and found the best angle with which to capture the shot. “We then designed these foreground buildings and placed them on articulated scaffolding so we could twist them and turn them,” Adam Stockhausen, the production designer, said. Those foreground sets, angled just so, were able to give the impression of depth to the environment while creating the kind of symmetry in the frame often found in Anderson’s work.

The top floors of the building, which include a sign so wordy (The French Dispatch of the Liberty, Kansas Evening Sun) that it continues across the upper-floor windows, were actually designed as a miniature. That miniature was digitally merged with the real building to give the top of it a more stylized look. The townscape of buildings in the background to the left is also a digitally added miniature. But on the ground level, the fronts were constructed for the film.

Buildings around town had signs painted directly on their walls in bold, frequently all-cap fonts to sync up with the film’s vision, but Stockhausen said his team sought out already-refurbished buildings to get movie makeovers. “Then we could come in and do our painting without damaging any kind of a historical finish,” he said, “and restore it afterward.”

While most of the film’s exterior scenes involved existing locations, one shot required something special. In an early moment of the movie, a waiter climbs a quirky staircase in the middle of the French Dispatch building that is visible at certain parts and hidden by walls at others. The design team built a full-scale version of the building’s rear so the cameras could capture the actor navigating the staircase from that vantage point.

For a sequence set during a student revolt and standoff with the police, the creative team took over a residential square. Blocks of cobblestone were created out of foam, and two cafe fronts on either side were built by the crew. While at least one of the trees in the space was already there, Stockhausen and his team built more to enhance the look. Dawson said the production aimed to make sure residents were kept content while shooting around their spaces, whether that meant compensating them for any inconvenience or putting them up in a hotel. “It was case-by-case for each person,” he said. “But the town was very welcoming.”