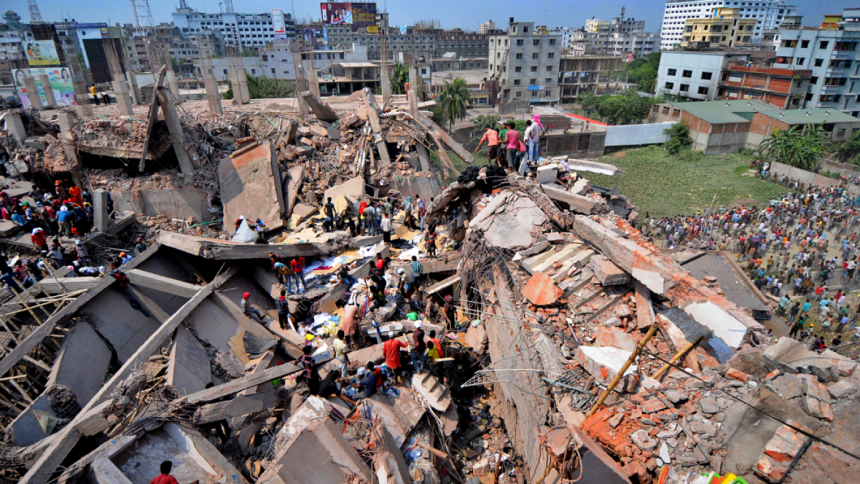 A man holding on to a woman. Her back arched; a tear of blood streaming down his cheek. Both ashened by the debris of a collapsed Rana Plaza.

I still remember the shock, the heartbreak I experienced when I first saw the picture. Photographer Taslima Akhter had taken the photo and it was everywhere – on the covers of newspapers, magazine centrefolds, blaring TV screens.

To be honest, that picture is the only clear memory I have of the tragedy. I had turned 10 only a few days earlier. Everything else is a blur when I go down memory lane. Only vague recollections of adults in the household constantly watching the news and wistfully complaining about labour rights in the country.

It’s not just the survivors either. On the sixth anniversary of the disaster in 2019, a rescue volunteer who worked at the site of the collapse took his own life. Friends later confirmed that Nowshad Hasan Himu, 27, was suffering from depression and trauma since his time on the ground.

What lurks on the other extreme end of the spectrum of mental issues, however, is sadly much more prevalent among people, and especially the youth these days: desensitisation. While many people were shaken by the unimaginable death toll during the Rana Plaza collapse, the constant onslaught of human rights abuse in the years to come numbed them to the pain. In fact, tragedies are now the way of the world in their eyes. It is what it is and they accept it.

This desensitisation has trickled down from the minds of the older generations to those of the younger ones. Many of my peers look back at the Rana Plaza tragedy with dull, dead eyes. Like the ruins of a castle that once was. They recognise that it is one example of deep neglect of workers and their safety that continues on to this day.

Terrifyingly enough, it does not evoke any emotion in them. They post about ongoing humanitarian crises at home and around the world but more often than not, they do so without any real feeling or passion for the cause and solely because the topic is trending online. They recognise the injustice but can’t really process it.

They cannot be blamed, though. The world around us has normalised brutality and unfair hierarchies in their minds and it is on us to educate ourselves, and them, on desensitisation and all the ways to overcome it. After all, we are inheriting a world plagued with political, economic, environmental, and social issues that affect people globally.

If we wish to leave a healthier world behind, we need minds that are aware and empathetic more than anything. At the end of the day, no activism is effective or sustainable enough if there’s no passion fuelling it.