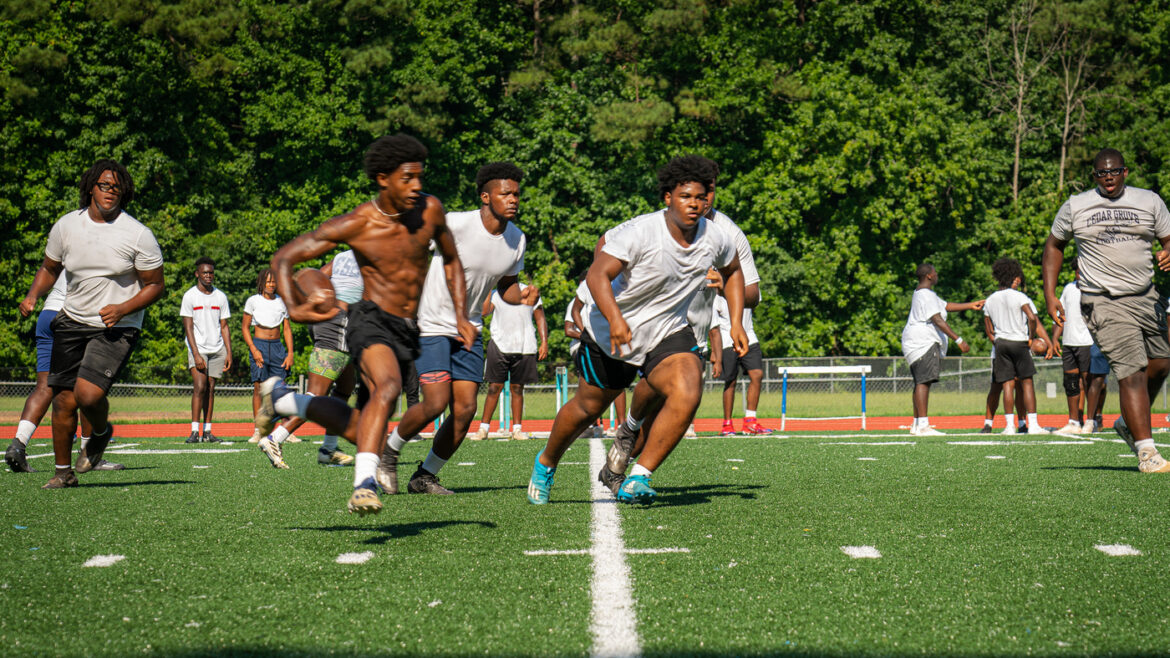 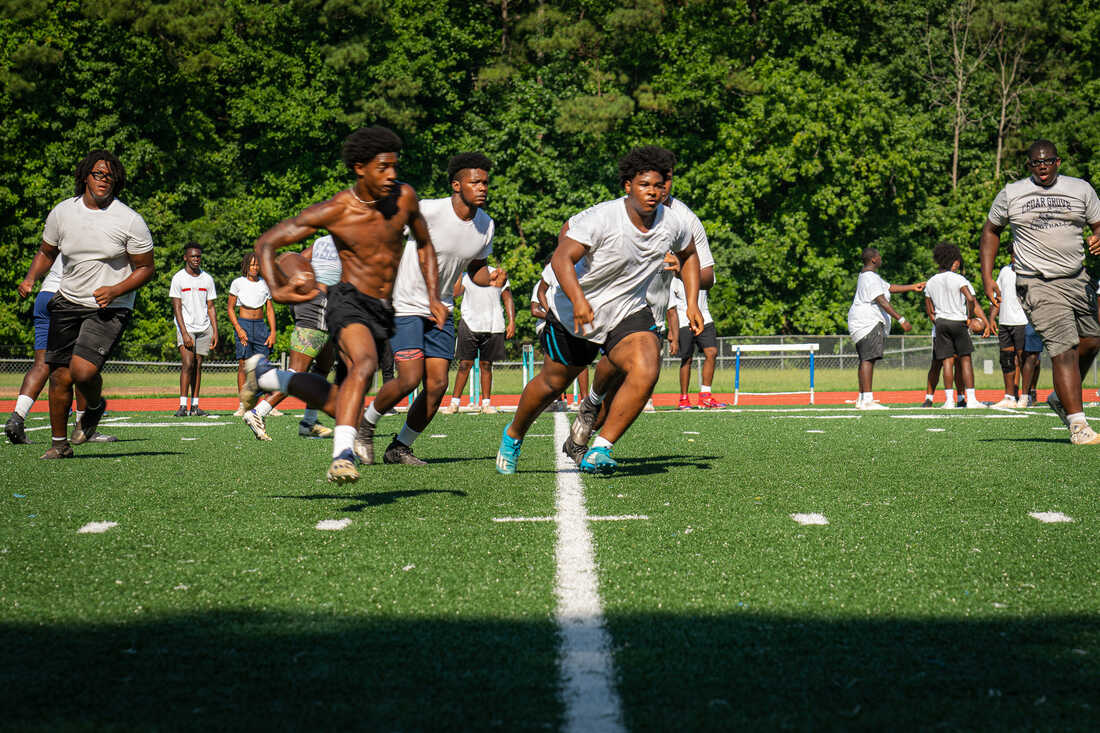 Football players at Cedar Grove High School in DeKalb County start practice in late July without pads to give them an acclimatization period to get used to the heat. This is a statewide rule from the Georgia High School Association. 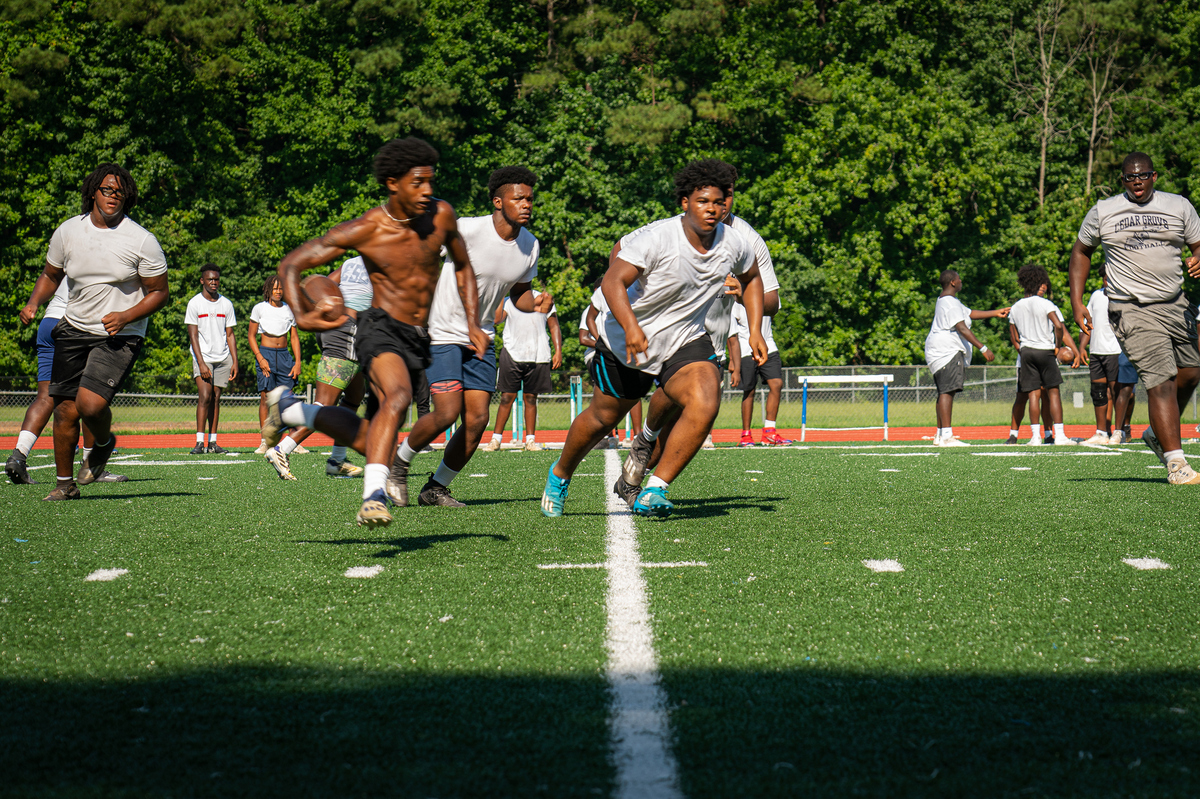 Football players at Cedar Grove High School in DeKalb County start practice in late July without pads to give them an acclimatization period to get used to the heat. This is a statewide rule from the Georgia High School Association.

ELLENWOOD, Ga. — High school football teams around the country are starting training this time of year, including the Cedar Grove Saints.

On a hot, humid morning, players were doing drills on the field behind their suburban Atlanta high school as head coach John Adams gave them guidance and encouragement.

This is a good team; they’ve won four state titles in the past six years, and four former Saints were in the NFL draft this past year – more than any other high school in the country.

So Adams was excited about the upcoming season. But he was also watchful about keeping the athletes safe as they worked out in the Atlanta heat.

“The heat has been to a point where it’s hard on anybody,” he said. “But I think if you condition consistently in the heat, you kind of get used to it.”

He reminds the students to drink enough water even on days they aren’t practicing. They take longer breaks. And he said he checks on them during practice, to make sure they’re OK.

Football and the dangers of heat

From the pros, to college, to high school, football players start practicing at the hottest time of year, many on turf fields roasting under direct sun. They wear layers of equipment, and many of them – especially the linemen – are big.

That can add up to a dangerous situation.

According to research from the University of Georgia, between 1980 and 2009, 58 football players around the country died from heat-related illness. Most of them were in high school.

The study, published in 2010, found that the number of football players dying from the heat was going up over time. Georgia was one of the worst states, leading the country in high school football player heat-related deaths.

But in the last decade, Georgia has turned things around. Experts say it’s bucked the trend of rising numbers of players suffering from heat illness. And the rules put in place here have become a model for other states looking to protect student athletes from the heat.

That’s all the more important as climate change drives up temperatures and humidity.

At Cedar Grove’s practice, the sideline, which was in the shade, was littered with water bottles. The team took five-minute water breaks together, but Adonijah Green, a 17-year-old defensive end, said athletes can also get a drink whenever they need one.

“We’re able to hydrate anytime with no restrictions on the water,” he said

And the players weren’t wearing their pads yet. In late July, they were getting used to working out in the heat, with limited practices, limited contact – no tackling allowed – and without all their equipment.

“With the pads, it gets hot, it gets heavy,” Green said. “It tires you down.”

Athletes have to be allowed to hydrate whenever they need to, and coaches aren’t allowed to make them do drills as punishment.

During the hotter part of the year, teams also have to measure the wet bulb globe temperature, which factors in not only heat and humidity, but also sun exposure, before and during practice. Depending on that reading, there are more and longer breaks required, and at high temperatures, teams have to be prepared to immerse a player in an ice bath if needed.

Bud Cooper, a clinical professor in the Department of Kinesiology at the University of Georgia who studies heat illness and athletes, said before the Georgia High School Association adopted those rules about a decade ago, schools could do pretty much whatever they wanted.

After a high-profile heat-related death of a high school football player, though, the association was ready to make a change.

“Clearly, there was a problem,” Cooper said. 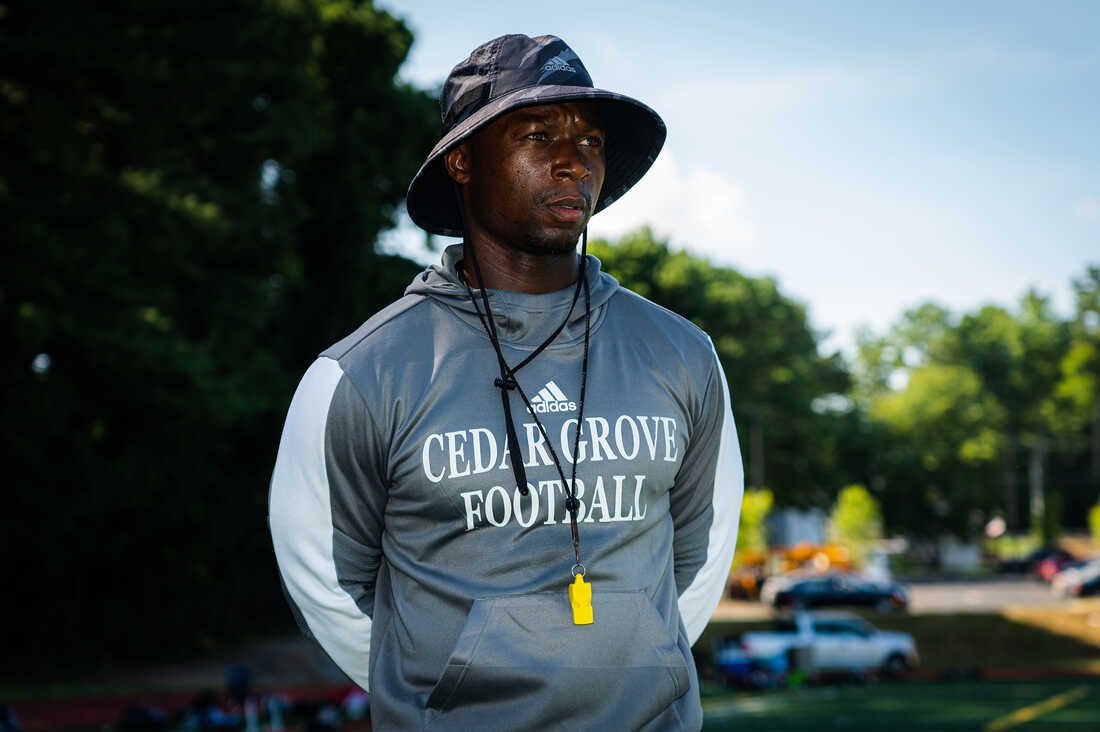 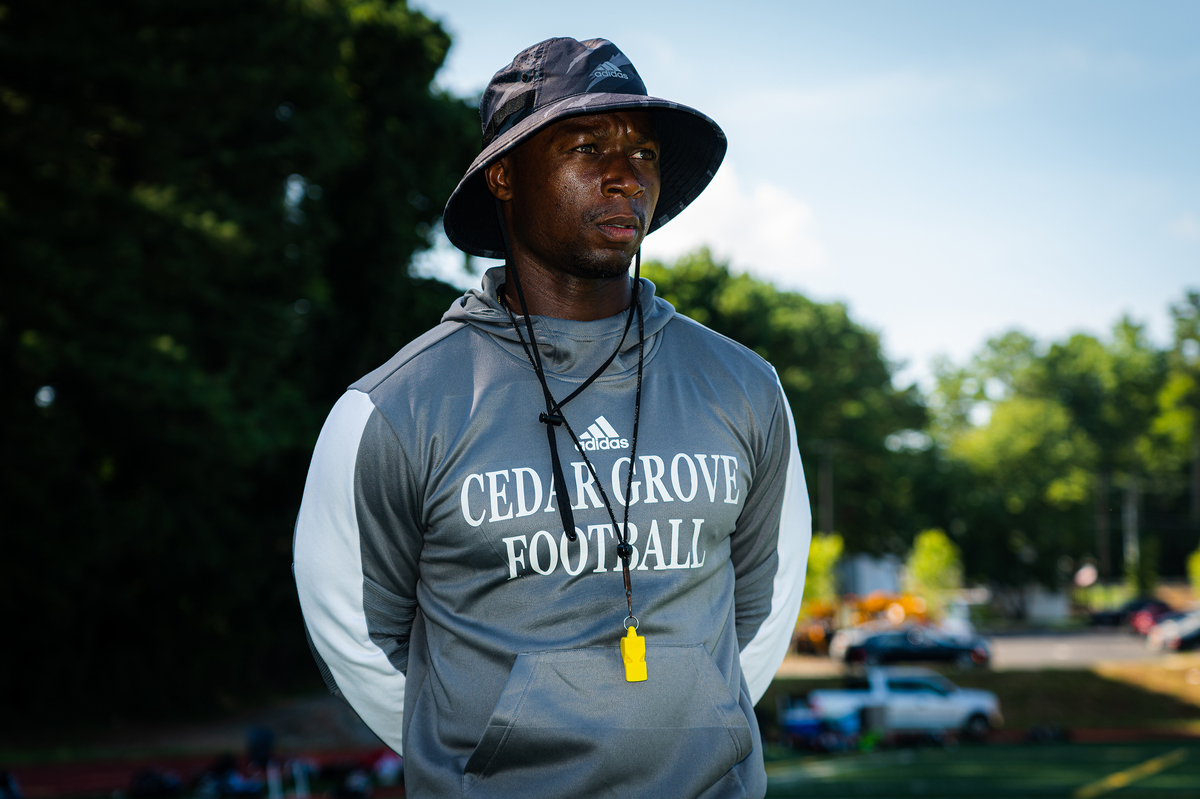 He and other experts at UGA designed the heat rules based on their research. Cooper said when they presented them to the high school association, he wasn’t sure how they’d be received.

“The rules committee was made up of a group of five coaches, all who had individually, probably 35 or 40 years of coaching. So folks that have been around for a long, long time,” he said.

But the rules, which cover all high school sports, not just football, were adopted, he said, after relatively little discussion.

Cooper and his colleagues did a follow-up study after the rules had been instituted, to confirm that they worked.

According to their research, there have been fewer heat illnesses, and, among programs that followed the rules, no heat-related deaths among high school football players in Georgia.

“It’s exciting for my part,” Cooper said. “There is nothing that’s more satisfying than for me to be able to sit here and say, ‘I’ve done some things that have saved lives.’ “

And not only in Georgia, according to Becca Stearns, chief operating officer at the Korey Stringer Institute at the University of Connecticut, a program that studies and advocates for athlete safety, named after a Minnesota Vikings player who died from heat stroke.

“Georgia is one of the states that has been so profound in its impact and leadership when it comes to heat safety and the policies enacted within the state,” Stearns said.

What stands out about Georgia, Stearns said, is that the rules are based on data and research. Other states have been able to adapt Georgia’s model to protect their student athletes, too.

According to Stearns, 30 states mandate some kind of policy around heat. A dozen states base their policy on the wet bulb globe temperature.

According to another paper from the UGA researchers, in the future, Atlanta could have four times as many days when it’s too hot to exercise outdoors safely. Other cities around the country also see increases.

“It’s certainly a very relevant conversation in terms of maybe trying to act now, before it becomes even more intense,” Stearns said. “We’re seeing an uptick in the cases of heat illness.” 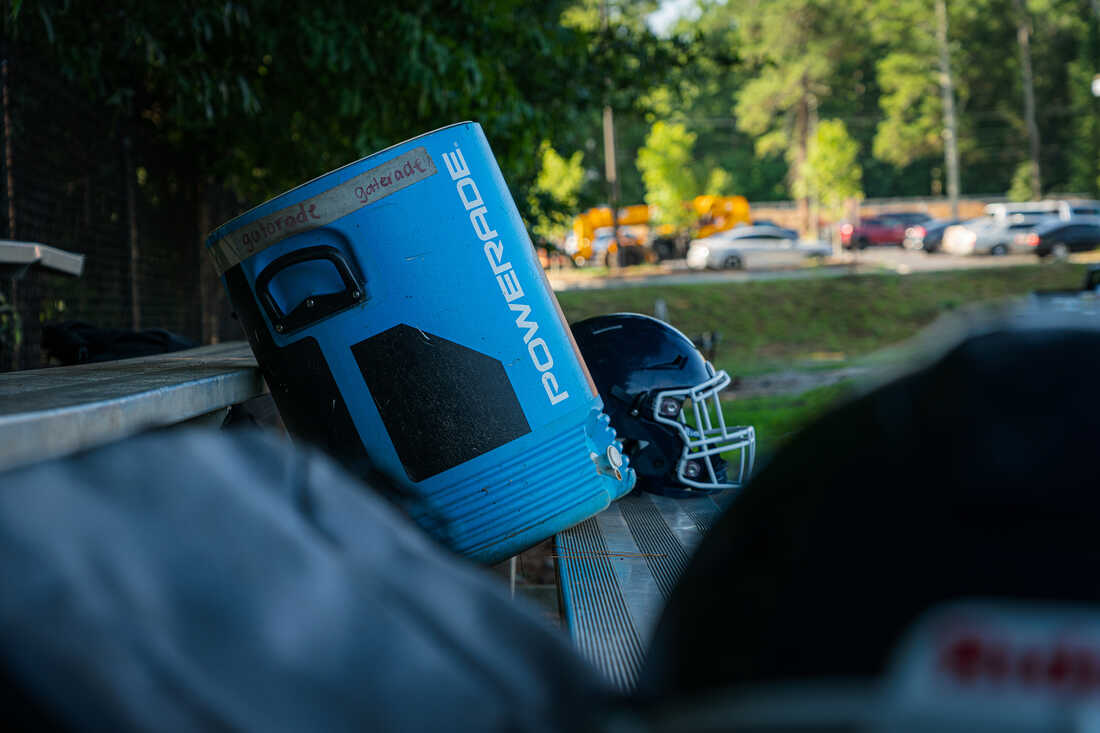 The Cedar Grove football team has a shady place to take their breaks.

The Cedar Grove football team has a shady place to take their breaks.

Experts underscore, death from heat stroke is preventable, but teams have to be prepared: to be able to recognize its symptoms, and to treat anyone suffering from it as quickly as possible – cooling their bodies down before transporting them anywhere.

For parents of student athletes, Stearns said they should feel comfortable asking what their school’s or state’s heat policies are.

“The question always comes down to, ‘Who is responsible for the health and safety of our high school athletes?’ And the sad thing is, it’s not always a clear answer,” she said. “I would not drop my kids off at the pool without a lifeguard. And it’s the same idea with this. You want to make sure those protections are in place before you drop your kid off at sports practice.”

Cedar Grove’s Coach Adams said to him, the key is to plan ahead, be smart with practices, and always keep the best interests of the students in mind.

“They’re kids. So, you know, sometimes kids are just going to try to toughen it out. But you got to be smart,” he said. “Life is more important than football.”