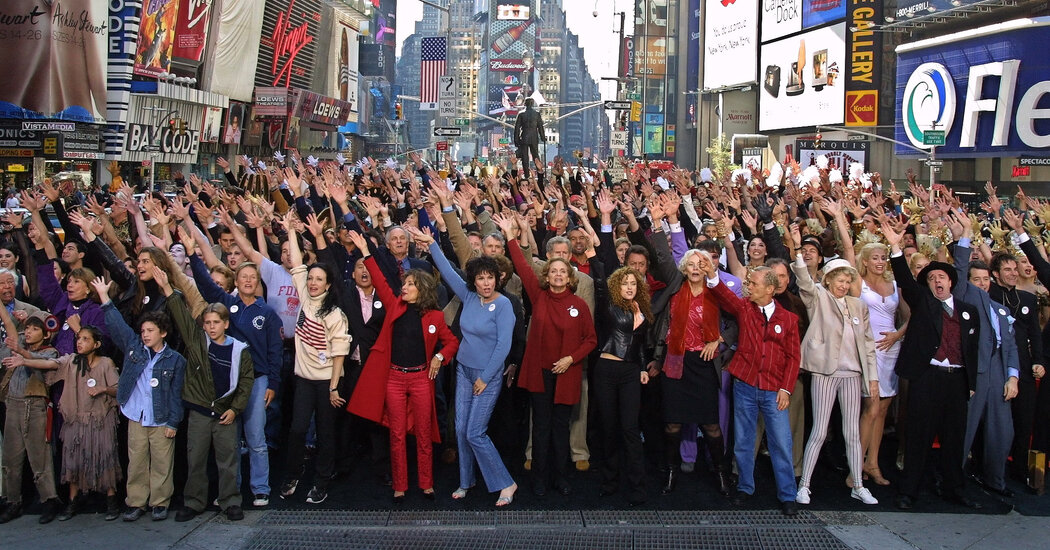 NATHAN LANE, performer Everybody was shaken by what happened. And people were concerned it might happen again. “The Producers” had opened and played through summer and then it was the fall. We went back on a Thursday, all because of [then Mayor] Rudy Giuliani — this is before he was a raging [expletive]. It felt wrong to be going back so quickly. And yet we were trying to do something positive.

DREW HODGES, founder, SpotCo advertising agency Something like five days later we were back in the office and trying to figure out what to do. We had this idea of doing a TV commercial, getting everybody into Times Square. Barry Weissler, the “Chicago” producer, he was a friend. We went to him and said, “We have this idea, help us rock and roll it forward and get it to more powerful people.” And I believe he said, “I was thinking the same thing.”

BARRY WEISSLER, producer We knew we wanted to sing “New York, New York.” What else? It was an idea that grew out of my meeting with Jed [Bernstein, former Broadway League president], saying we should bring the entire Broadway community together in one place to celebrate humanity — the tragedy aside, 9/11 aside. Let’s celebrate Broadway, humanity and life.

BERNADETTE PETERS, performer Of course, New York was afraid. We were concerned: Is it going to happen again? But we just had to be brave and let people know that it was time to take back New York.

JERRY MITCHELL, choreographer Drew Hodges called me and said, “We’re getting ready to do a commercial. We’re filming in Times Square. I’m going to get all the actors before their matinee. Will you choreograph it?” I said, “Absolutely, what do you need?” He sent me the song, and I had 12 dancers, I think, with me. I choreographed a little something for them that night. And the next morning, we met at the Booth Theater [functioning as a green room]. I went onstage, and there was the Broadway community, in costume, sitting in the audience.

CHRIS BONEAU, publicist [Producers] were told, “We need two people to do this, and it has to be Nathan and Matthew [Broderick].” Or: “It can be three costumed characters, and these are the ones who we would like to get.” You got to hand it to the people who wrangled the whole thing. I mean, there were so many people behind the scenes who were doing every single thing they could to get this moment right, because you only had one shot at it.