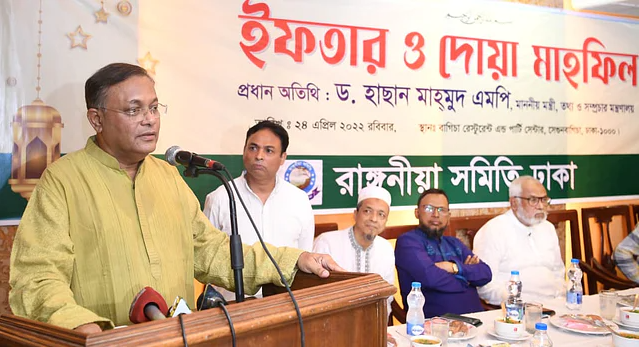 He was speaking as the chief guest at an Iftar function organized by Rangunia Samiti in the minister’s constituency at a restaurant in the capital’s Segunbagichar on Sunday evening. This information was given in a press release of the ministry.

The information minister said that not only the prices of commodities have gone up, but also the lack of supply has led to poor availability of food items in shopping malls in Europe. Transportation costs have also risen there. The Russia-Ukraine war has not increased the cost of transportation in the country, nor has it increased the price of electricity.

The pre-iftar meeting was presided over by Rangunia Samiti president Obaidul Quader and general secretary Jahangir Alam conducted the iftar and prayer mahfil. Besides, vice president Abu Taher, Nurul Haque and others spoke.

Ensuring direct participation of the people is a prerequisite for sustainable development
. Maqbool Hossain.

He was speaking as the chief guest at an Iftar and discussion meeting organized by the BCS Information Association at the Information Building auditorium in the capital’s Kakrail on Sunday evening.

The Information Secretary said building confidence in development activities and ensuring direct participation of the people is a prerequisite for sustainable development.

He also said that training activities have been intensified at home and abroad to make the officers of BCS Information Cadre more efficient and technological to ensure information services to the people.

The Iftar and discussion meeting was presided over by Sam Golam Kibria, Director General, Department of Film and Publications, President, BCS Information Association. Retired and current members of the information cadre were present at the function conducted by Munshi Jalal Uddin, Deputy Press Secretary to the President.