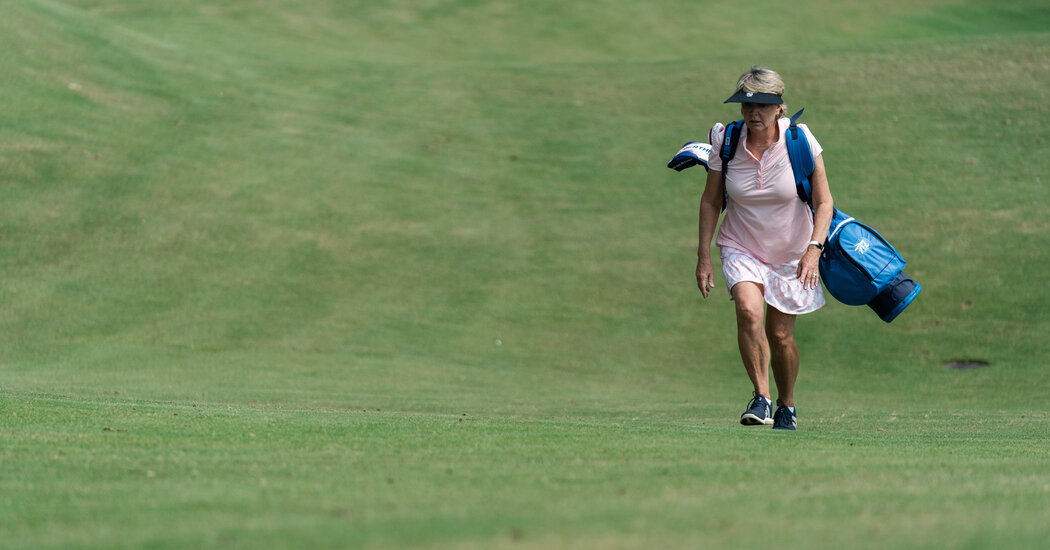 There is a new movement afoot in recreational golf: walking.

In swelling numbers nationwide, golfers are spurning the motorized golf cart — a standard-bearer of American golf rounds for more than 50 years — and instead choosing to stride or stroll from shot to shot.

It has contributed to a substantial rise in rounds played and spawned another novel phenomenon: The verifiable notion that golf, when a round is walked, is exercise that can supplement a fitness regimen since golfers routinely burn 700 calories or more in an outing that can traverse up to six miles.

Moreover, the walking boom, propelled by the advent of lightweight, trendy carry bags and technologically sophisticated pushcarts for golf bags, is being advanced by a legion of young and older players — with an increasing percentage of them women — who hark back to golf’s roots as a walk-only activity.

“Walking is cool again,” said Bob Bullis, 72, who plays four times a week at the El Macero Country Club near his home in Northern California. “I’m out there together with these kids walking, getting a good workout and playing the sport the way it was meant to be played.”

For decades, the stereotypical perception of the sport has been of sedentary golfers zooming around the course in carts with cup holders full of mixed drinks. But many golfers today are purposefully adopting a more wholesome, even Zen-like, vibe.

“Walking the two minutes from shot to shot can be peaceful meditation,” said Kevin McKinney, 51, a musician who plays regularly at the walking-only, municipally owned Hancock Golf Course in Austin, Texas. “You get your heart rate up, something you don’t experience when rattling around in a cart. It’s a beautiful setting if you let it be.”

Interviewed as he played the Hancock course last month, McKinney texted a picture to a reporter of a man and a woman golfing while they pushed a child in a baby stroller.

The increase in walking rounds — some golf courses have seen an upsurge of 300 percent — is traced to the pandemic and the impact it has had on leisure pursuits.

In 2020, golf was one of the few outdoor activities considered safe from the spread of the coronavirus and American golf facilities hosted 50 million more golf rounds than they did in 2019. During much of last year, because of strict physical distancing guidelines, motorized golf cart use was banned and walking became commonplace, even at country clubs and resorts that once required the use of a golf cart.

“People discovered they liked walking and even when Covid rules were lifted this year and carts came back, people were like, ‘No, we’re going to keep walking,’” said Jerramy Hainline, the senior vice president of GolfNow, an online tee-time service with nearly four million registered golfers that provides technology to more than 9,000 golf courses. “Walking is now here to stay.”

If that remains true, it will bring new light to recent studies that have championed golf’s health benefits. In 2018, a consortium of public health experts, with help from several governing bodies including the World Golf Foundation, researched 342 previously published studies on the sport and linked playing golf with better strength and balance and a lower risk of heart disease. A 2008 Swedish study of 300,000 golfers found the death rate for golfers to be 40 percent lower than for other people of the same sex, age and socioeconomic status, which translated to a five-year increase in life expectancy. Golfers with lower handicaps were the healthiest, perhaps because they played more.

But the most fascinating and enduring study of golf’s creditability as worthy, moderate exercise was conducted 13 years ago by Neil Wolkodoff, the director of the Colorado Center for Health and Sport Science. At a cost of $30,000, Wolkodoff strapped portable metabolic measuring systems to amateur golfers to count calories burned while playing nine holes in a variety of ways: walking and carrying clubs, walking with a pushed or pulled cart that transported their clubs, walking with a caddie and riding in a cart.

It was not a surprise that golfers walking and carrying their bags across the typically undulating topography of a golf course expended the most energy and, on average, burned 721 calories. Walking with a pushcart produced roughly the same caloric output and being accompanied by a caddie burned 621 calories. Even riding a cart while playing nine holes burned 411 calories on average. Just swinging a golf club 100 times, which the average golfer would likely do with practice swings, uses up a significant amount of energy.

The calorie burn would likely double over 18 holes, when a player typically zigzags across fairways chasing errant shots. There have been follow-up studies to the research by Wolkodoff, who said his findings have held up as accurate.

“Golf is not the same exercise as running or using an elliptical, but it’s got appeal as part of a health routine,” Wolkodoff, who has a Ph.D. in physiology and has trained a variety of professional athletes, said this month. “People ought to expend 2,500 to 3,000 calories a week. If people go to the gym three times a week and play golf twice a week, they can hit that number.”

The walking golfers flocking to the game in the last two years are part of a cohort of new players that are more likely to be female and younger than 35. A survey of nearly 25,000 golfers released last month by KemperSports, which manages 120 golf facilities nationwide, discovered that players new to the game since last year’s pandemic were almost 33 percent girls or women, which is nearly 10 percent higher than the industry average. More than 26 percent of the new golfers were 18 to 34 years old, roughly four percent above the national average.

“We had been missing the Millennials and Gen Z demographic in golf,” Steven Skinner, the Kemper Sports chief executive officer, said. “But they’re into fitness and more willing to throw a bag on their back and walk. That’s been part of why they’ve really jumped into the game.”

More than a quarter of junior golfers are also nonwhite, whereas just 6 percent of young golfers were 21 years ago.

At the Hancock golf course in Austin, where rounds surged 82 percent last year and have climbed another 19 percent this year, Kevin Gomillion, who oversees golf operations, said the increases came after the city decided to make the course a walking-only facility.

“It’s one of our best moves,” Gomillion said. “The course went from struggling and being upside down to solvent.”

The condition of the course has also improved dramatically without tire tracks on the fairways and high traffic areas. Slow play has become less of an issue since people tend to walk at roughly the same pace.

While walking rounds are snowballing, no one in the golf business expects motorized golf carts to disappear entirely. For one, many golfers need a cart for health reasons or because they have a disability. Also, daily rental cart fees can provide considerable revenue to golf facilities (although many courses this year have started charging the same fee for walking or riding in a cart and not seen a drop-off in play). Golf outings often see as many as 80 players teeing off at the same time all around the course, which is far easier to accomplish with cart use. Still, before this year, nearly 70 percent of rounds were played with a golf cart, according to National Golf Foundation. But in a foundation survey last summer, 33 percent of golfers who played regularly said they were walking more frequently. Similar figures for this year have yet to be compiled.

Traditional golf carts, which became widespread in the 1960s, are facing more modern competition. At PGA Tour Superstore, a leading golf online retailer with 47 brick-and-mortar locations across the country, sales of easy-to-lug golf bags and lightweight, nimble pushcarts rocketed by as much as 210 percent in 2020. This year, a company spokeswoman said, sales of women’s carry bags have doubled and junior carry bags sales are up 200 percent.

There are also new modes of golf course transportation — the Phat Scooter, an electric two-wheel device, and four-wheel GolfBoards — challenging the standard electric or gas golf cart, though they still offer golfers a ride. Robotic carts controlled by a remote can also carry your bag.

“The game is changing, which is something people once said golf would not do,” Hainline said. “But it’s different than it was a year ago and golf is going to be even more different two years from now.”

At the Bobby Jones Golf Course in Atlanta, walking rounds were usually relegated to undesirable late afternoon or evening tee times. But, spurred by a busy season of walking rounds during the pandemic when carts were prohibited, the course this year made all play before noon walking only (carts, and walkers, were allowed after noon). Revenue has increased and walking golfers now represent 74 percent of rounds played.

“People see it as a two- or four-hour walk in the park,” Brian Conley, the course’s general manager, said.

Winky Fowler plays regularly at the Bobby Jones course and used to ride in a cart. In the last 18 months, she and her circle of friends began walking instead.

“We were like, ‘This ain’t bad, I like this,’” Fowler said. “It keeps you limber, the exercise is great and your body feels fluid. We’re going to keep it up; it just makes you feel good.”