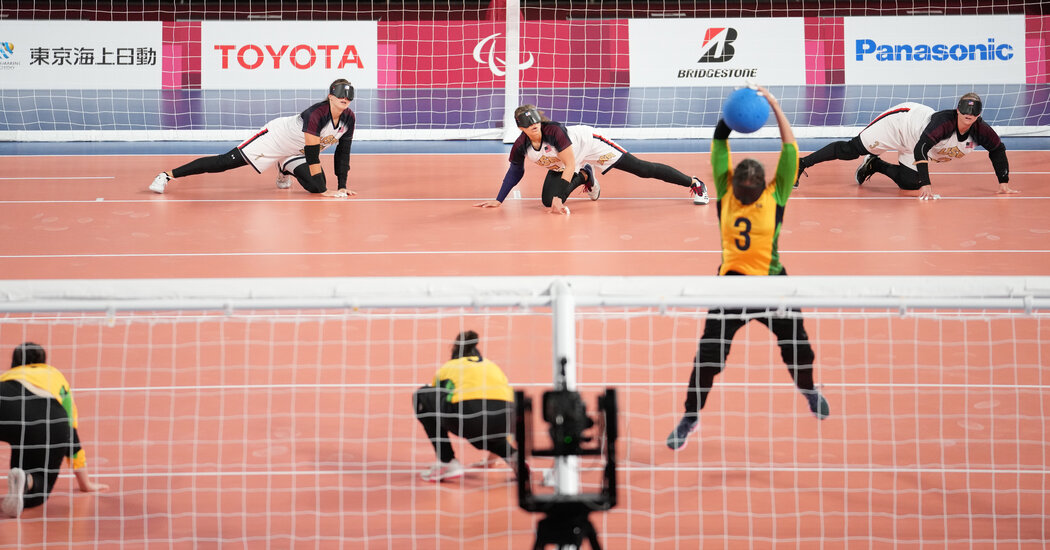 TOKYO — Asya Miller and Lisa Czechowski can’t quite remember when they met, probably because it happened half a lifetime ago. In separate interviews this summer, one guessed that they met at a regional track and field meet. The other thought it happened at a goalball tournament.

Whenever and wherever their first encounter occurred, neither could have known then that they would be teammates two decades later, playing goalball for the United States in their sixth Paralympic Games, Czechowski at age 42, Miller at 41. In Tokyo on Wednesday, the U.S. beat Russia, 5-3, in the quarterfinals, advancing to a semifinal on Thursday against Brazil.

The sport is one of only two in the Paralympics that has no counterpart in the Olympic Games. (Boccia is the other.) But Czechowski and Miller have no counterpart in Paralympic history: They are the first pair in team sports to play together through six Games, according to research by Bill Kellick of the U.S. Association of Blind Athletes.

Over the years, Czechowski and Miller have quietly become leaders in a sport that the general public knows little about but that is a staple of the Paralympics.

They won their first Paralympic medals separately, in the discus at the Sydney Games in 2000, Czechowski a silver, Miller a bronze.

“With that background in common of track and field, that’s how we really kind of bonded,” Miller said.

Even then, they were not opponents, because they competed in separate classifications for visual impairment. Those Games were also their first on the U.S. Paralympic goalball team, which finished sixth.

Soon after, Miller and Czechowski committed to goalball as their primary sport, and they have won a silver medal in Athens, a gold in Beijing and a bronze in Rio de Janeiro.

In Tokyo, one other 40-something woman reached the goalball quarterfinals, Rie Urata of Japan, who is 44. Most of the rosters are loaded with athletes in their 20s; the Turkish team, the reigning Paralympic champion, has an age range of 17 to 27.

Designed specifically for blind and visually impaired athletes, goalball is played on a court 18 meters long and nine meters wide. Three athletes for each side try to throw a ball embedded with bells past the opponents’ goal line, typically with a bowling delivery because the ball must hit the floor. String is attached to markings on the floor to guide the players, all of them wearing eyeshades to offset differences in impairment.

On defense, players work on their hands and knees and often hurl their bodies at the ball. Advances in sports medicine have helped keep Czechowski and Miller, who once tore a rotator cuff, together on the court for so long.

Jake Czechowski, Lisa’s husband and the goalball national team’s head coach since 2016, can personally attest to the game’s toll on the body. He once played in a tournament that allowed sighted people to play, with the proper eyeshades. “I got beat up,” he said. “I had the bruises to prove it.”

The Czechowskis have a 7-year-old son named Jay, and Miller has a 10-year-old boy named Ryder. They both arrived on a July 2.

“It’s a really great connection we have — the fact that our children were born literally three years to the day apart,” Lisa Czechowski said.

On the court and in conversation, Czechowski conveys a sense of order, discipline. Miller, a bit more id than ego, likes to keeps things loose.

“They really help balance each other out,” Jake Czechowski said.

He described Miller as “extraordinarily casual” and also “a little bit of a neat freak.” On the court, he said, she cleans up her area much the way a hockey goalie will tidy the crease.

“And she’ll be making comments about, you know, ‘I smell popcorn in the crowd,’ or just about anything but what’s going on in the game,” he said.

Early this summer, Miller sketched out a fantasy goalball commercial for Geico set in a bowling alley. It ends with her throwing the ball through the back of the building.

“That’s the kind of stuff I’ll be talking about to myself on the court,” she said, “just kind of silly stuff I find entertaining but doesn’t make any sense to anyone else.”

Miller sees Lisa Czechowski as “a textbook active listener. You know, repeating exactly what you say in the form of a question.”

But when Czechowski aims to sell the sport of goalball to young people with impaired vision, she has something of a stump speech prepared.

As a teenager, Czechowski said, she recoiled from anything that set her apart from her peers.

“I was definitely struggling with the stigma of being visually impaired,” she said. “I had large print books in school. I had to sit in the front of the classroom. I had to use different little vision devices to see. So it was very obvious. And that was hard for me because I always wanted to be like everybody else.”

Her mother, she said, got her involved in softball, which did not work out well. Bowling turned out to be a better fit. “It was indoor, a controlled environment, not that bright,” Czechowski said. “I was like, ‘This is great.’”

Ultimately, she found success in track and field, which supported her need to fit in at her high school even as her vision continued to decline.

She first heard about goalball when an adaptive physical education adviser, working for the state of New Jersey, visited her school to instruct gym teachers how to create opportunities for students with disabilities. Czechowski remembers trying badminton with an extra large racket and a huge birdie. Ultimately, she couldn’t see the birdie. When he suggested and explained goalball, she balked. She wanted no part of a sport intended only for the visually impaired.

“I wasn’t embracing my own visual disability at that time,” she said, “and I wasn’t ready to, honestly.”

The adviser, though, introduced Czechowski to a group of what she calls “wonderful, persistent people” involved in the state’s Association of Blind Athletes. They kept checking in, offering goalball opportunities until she relented.

In October 1995, she attended her first goalball practice, at a community center in West Orange.

“My life forever changed when I went to this practice,” she said, “and I allowed myself to to open up and, you know, literally gain vision of what was out there.”

Now she and Miller marvel at how much the game has changed since their early years.

It used to be divided into seven-minute halves; now they each last 12 minutes.

Changes in the shot clock, now a strict 10 seconds from the time a player makes contact with the ball on defense, have made the game much quicker.

The Brazilian team, which the U.S. defeated, 6-4, in its first game of the tournament, has developed a backward shot hurled between the legs, a little like a long snap in football.

“We don’t know that they’re throwing between their legs. You can just hear the ball coming at you,” Czechowski said, adding: “I do not have that flexibility, but their throws are amazing.”

Another significant change for the sport: A resident training site opened for the women’s team in 2017 in Fort Wayne, Ind., at the Turnstone Center for Children and Adults With Disabilities.

The Czechowskis relocated from Arizona to Fort Wayne, while Miller stayed in Oregon, where she works as a personal trainer and lives with Simony Batista, her wife of nearly four years.

“But I think it’s crazy and awesome that they have maintained that love of the sport and that passion and wanted to stay on,” she said, “because it is a huge time commitment and it takes a lot of dedication.”

Miller has suggested that her competitive goalball days are numbered — “my body has been telling me it’s time.” Czechowski, though, just might be back for the Paris Games in 2024.

“As long as she can get her, you know, parts replaced if need be or whatever surgeries,” Miller said, “I don’t think she’s ever going to retire.”