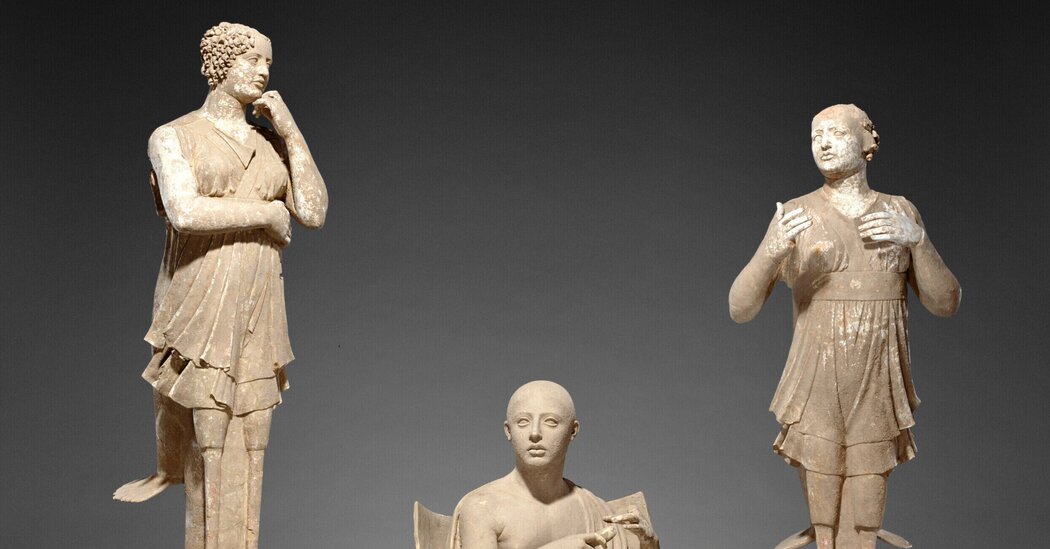 A beautifully preserved grouping of three life-size terra-cotta figures dating to 300 B.C. that was seized from the J. Paul Getty Museum in Los Angeles by the Manhattan district attorney’s office will be sent back to Italy after the museum agreed that it had been illegally excavated, museum and law enforcement officials said.

The three objects were confiscated in April as part of an investigation into an accused Italian antiquities smuggler, Gianfranco Becchina, 83, who has been convicted of receiving stolen antiquities by Greece, officials said. The warrant listed its current value at $8 million. The Getty Museum announced the return on Thursday.

“Once we notified the museum of the investigation and the evidence we had, they cooperated fully,” said Matthew Bogdanos, the head of the district attorney’s Antiquities Trafficking Unit. Mr. Bogdanos said his office was able to reach across state lines with the help of federal Homeland Security agents because the investigation is in his jurisdiction.

The director of the Getty, Timothy Potts, said in an interview on Friday that the removal of the grouping, known as “Orpheus and the Sirens,” was a hard blow. “It’s a very important example of ancient art and a loss to our collection and to our visitors,” he said, “but there is clear evidence that it had been illegally excavated so there was nothing left to do but return it to Italy.”

Massimo Osanna, the director general for museums for Italy’s culture ministry, said discussions with the Getty over the return of “Orpheus and the Sirens” had begun last February, when museum officials visited Rome. The subsequent seizure order “accelerated the situation,” he said.

The confiscation and return will strip the Getty Villa Museum of one of its signature pieces, which held pride of place near the museum’s entrance. The Getty Villa Museum, a large adjunct to the main museum in Los Angeles that was built to recreate a luxurious Roman country home, is filled with Greco-Roman antiquities.

In 2001, Becchina was briefly detained in Italy and charged with receiving stolen goods, illegally exporting goods and conspiring to traffic goods. In 2011, after a long legal battle, the charges were dismissed because the statute of limitations had expired. But the judge in the case said he must relinquish thousands of stolen ancient Roman artifacts because they had clearly been looted by tomb raiders.

The three figures were acquired by Getty himself in 1976, museum officials said, and they pointed to Getty’s diary entry for that day, which said the purchase price was $550,000. The extreme fragility of “Orpheus and the Sirens” requires specially tailored equipment and procedures, the museum said.

The museum said it has removed the objects from public view and will ship them to Rome in September. According to the Getty’s website, the grouping likely was colorfully painted and used to decorate a tomb. Officials said it will be exhibited at the newly opened Museum of Rescued Art in Rome before finding a permanent home in Taranto, in Puglia.

Osanna added that there is still disagreement with the Getty over a statue, “Victorious Youth,” also known as the Getty Bronze, which has been the subject of contention between the museum and Italy for decades. “We are still hoping to come to an accord,” he said.

The Italian authorities say the bronze was smuggled out of Italy without proper export papers and have accused the museum of being willfully negligent in carrying out due diligence before buying it.

The Getty counters that it was in fact a Greek statue discovered in international waters hundreds of years after it was crafted, so it has only a fleeting connection to Italy. The museum has said claims to repatriate it are groundless.

As with other museums, the Getty has returned numerous items to Italy in recent years after evidence emerged that they had been trafficked. In 2007, for example, the museum handed over 40 objects from its antiquities collection after what was described as a “long and complex negotiation” with Italian officials.

The Antiquities Trafficking Unit itself last month returned to Italy 142 items that had mostly belonged to the billionaire industrialist Michael H. Steinhardt and the Royal-Athena Galleries in Manhattan. Officials said many of those objects, seized last year, had gone through Becchina’s hands.