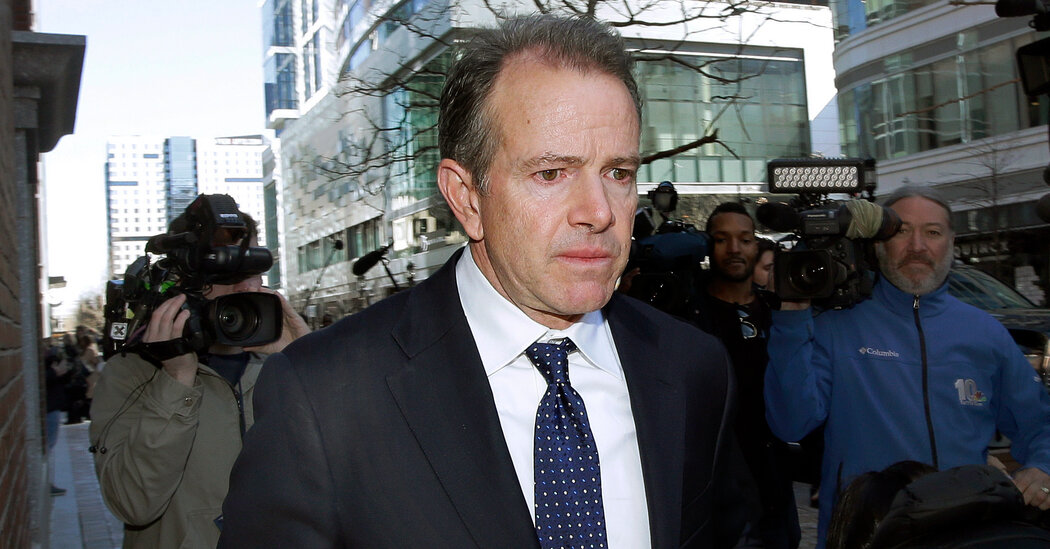 A former Georgetown University men’s and women’s tennis coach accused of soliciting and accepting bribes to help students get into the university was the latest person to agree to plead guilty Wednesday in an admissions investigation that has touched elite schools across the country, according to the U.S. attorney’s office for the District of Massachusetts.

The coach, Gordon Ernst, 54, of Chevy Chase, Md., and Falmouth, Mass., was scheduled to go on trial in November alongside coaches at other universities.

The agreement also came as the first week of testimony unfolded in the trial of two wealthy fathers accused of paying hundreds of thousands of dollars to get their children into the University of Southern California with trumped-up athletic credentials.

Mr. Ernst was accused of taking bribes to designate at least 12 students as recruits to the Georgetown tennis team, including some who did not play tennis competitively, between 2012 and 2018. Federal prosecutors say he was part of an operation orchestrated by William Singer, known as Rick, who billed himself as a “concierge” college admissions adviser to the wealthy.

Mr. Ernst agreed to plead guilty to charges including conspiracy to commit federal programs bribery and filing a false tax return, according to court documents. A plea hearing has not yet been scheduled, federal prosecutors said.

Mr. Ernst has agreed to a sentence of at least one year and up to four years in prison, two years of supervised release and the forfeiture of $3.4 million in proceeds derived from the scheme, according to the prosecution. Mr. Ernst’s lawyer, Tracy Miner, said Wednesday that the trial now taking place in Boston federal court did not have anything to do with her client’s decision, but declined to comment beyond that.A spokeswoman for Georgetown said that the university had cooperated with the federal investigation and that Mr. Ernst had committed “an unprecedented breach of trust.”

She said the university had investigated Mr. Ernst in 2017 and asked him to resign after discovering irregularities in the athletic credentials of two students who were being recruited to play; neither was admitted. But it did not know of any criminal activity until being contacted by the U.S. attorney’s office months later.

It is an open secret that recruitment-worthy athletes have a higher than average chance of getting into many elite universities, perhaps even more so than legacy admissions and the children of major donors. Mr. Singer told parents that he had created a “side door” to admissions through athletic recruitment.

Mr. Ernst was arrested in March 2019 with more than four dozen other coaches, parents, testing center officials and the admitted mastermind of the admissions scheme, Mr. Singer, who began cooperating with the government in 2018 and has pleaded guilty but has not yet been sentenced.

After the arrests, in May 2019, “Georgetown rescinded the admission of several students and dismissed them from Georgetown,” the spokeswoman said. Falsifying credentials on an application, she added, is cause for dismissal.

Since then, 57 people have been charged in the case, and about four dozen have pleaded guilty, including 33 parents.

The two parents now on trial, Gamal Abdelaziz, a former casino executive, and John Wilson, a former Gap executive, say they are innocent and were duped by Mr. Singer into thinking that they were making legitimate donations to the University of Southern California in order to smooth the way for their children to be admitted as recruited athletes.

Mr. Wilson’s son was admitted as a water polo player and Mr. Abdelaziz’s daughter was admitted as a basketball player. Both of them played those sports, and Mr. Wilson’s son was, according to the defense, a serious water polo player, but prosecutors have questioned their credentials to play at the collegiate level. Mr. Wilson is also accused of paying $1.5 million, in another scheme orchestrated by Mr. Singer, to get his daughters into Harvard and Stanford by falsely presenting them as sailors.

Other parents in the case are accused of agreeing to have their children diagnosed with learning disabilities so they could get 100 percent more time to take the SAT or ACT test and could take the test at testing centers that Mr. Singer controlled. Mr. Singer told parents that he could guarantee them any SAT score they wanted, according to a recording made while Mr. Singer was cooperating with the government. He said their children would never know about the fraud and would just think that they’d had a lucky day.