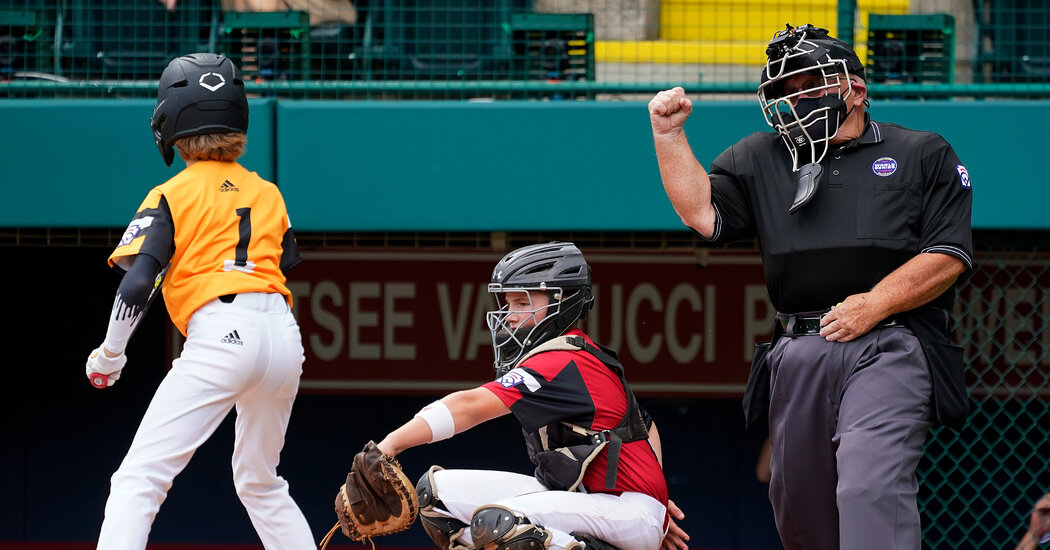 Every game at the Little League World Series starts the same way — nine players on the field, another holding a bat, and an umpire behind the plate, as anxious as anyone else, pointing toward the mound and shouting, “Play ball!”

That, the umpire hopes, is the last anyone really notices of the adults on the field.

“If someone says they’re not nervous when they go there, they’re probably fibbing a little bit,” said Joe Smith, part of the 2016 umpiring crew.

As the crew tries to slink into the background of this August slice of Americana carried out in South Williamsport, Pa., what fans, viewers and coaches — even those angry with the last call — might not appreciate is just how much the moment means to the volunteer umpires who see the Little League World Series as a once-in-a-lifetime (usually) highlight.

“Other than getting married, having kids and grandkids, that was the best experience of my life,” said Chet Cooper, part of the 2012 crew.

The series began on Thursday, a day after the Little League Softball World Series concluded in Greenville, N.C. The baseball version features 16 teams, the players ages 10 to 12, playing 30 games over 11 days.

The tournament is full of kids doing kid things, televised for national amusement. Much is made of their route to Williamsport and toward the championship, and players are the stars.

Much less attention is paid to umpires, many of whom have dreamed of taking the field at Williamsport since long before the players were born.

“You hear kids on baseball fields joking about how it would be great to play in the World Series someday,” said Kelly Dine, the crew chief for the last series final, in 2019. “Umpires are no different.”

The coronavirus pandemic prompted the cancellation of the 2020 World Series and stripped down the 2021 one. There are no international teams. There are few fans and less fanfare.

Every World Series umpire remembers where they were when they received the one-page invitation in the mail the winter before. The 16 chosen to work in 2020 were pushed to 2021. Given the altered tournament and diminished festivities this year, they were allowed to defer until 2022. All of them did.

He and others went through memory banks and umpire evaluations to select this year’s crew, all World Series veterans. There are just 12 of them, not 16, because part of this year’s protocol has no line umpires, meaning there are four umpires on the field for each game (one at each base), not six. None are from other countries, another break from tradition. Umpires rarely work games featuring teams from their area, to squelch claims of bias.

It can take decades to reach the pinnacle, if it happens at all, and being there lasts less than two weeks. To get to the Little League World Series, umpires have officiated thousands of games. All of them must have umpired at each rung below the World Series — district tournaments, state tournaments, regional tournaments.

They are volunteers, even during the World Series. They get some expenses paid, and a fresh uniform, but no paycheck. Dine is a high school biology teacher in Ohio. Smith has a landscaping company in Maryland. Cooper teaches microbiology at Youngstown State in Ohio.

This year’s crew includes a food-service manager, a school principal and an architect.

One thing it does not have: a woman. Rawlings said that one was selected for this year but deferred to 2022, and part of his goal is to increase gender and racial diversity and lower the average age.

As much as the umpires may cherish their obscurity, it can be hard to hide mistakes from national television audiences. Last week, during a regional tournament to decide who reached the World Series, a questionable strike call got the full meme treatment from ESPN when the batter looked stunned.

“You don’t need anyone to yell at you and tell you you kicked the call,” Rawlings said. “You know as soon as you did it.”

Smith said he had three calls that were challenged by video replay in 2016. One, a close play at third, was overturned. Another came when the second baseman insisted to his coach that he had applied a tag. Smith knew he had not. The call was upheld.

“The little second baseman looks over at me and says, ‘I missed him, didn’t I, Blue?’” the boy said, according to Smith, using the common nickname for umpires. “I said, ‘Yes you did.’ The boys all think they make the plays.”

It is those intimate moments that stick with umpires more than the opposing teams or the results. Cooper worked home plate when Uganda, the first team from Africa to play in the tournament, debuted in 2012. The leadoff batter got a hit, and when the next batter came to the plate, Cooper heard voices behind him amid the din.

“I turn around and they go, ‘We want that baseball,’” Cooper said. “Well, it’s in my bag someplace. And I go through the balls and the one ball has some mud on it. I said, well, this must be it. And I hand it to them.”

Dine, who also umpires high school and college games, mostly remembers her first and last times behind the plate at Lamade Stadium, the bigger of the two fields. It has a substantial grandstand and can hold more than 40,000 people, most on the terraced grass beyond the outfield fence. It can feel a bit like a fishbowl, she said.

“Nobody realizes just how small a 60-foot base path is, and how good these players are, until you get those bang-bang plays,” she said. “I remember walking out there and just feeling like a giant. I wanted to kind of shrink away somewhere.”

She was rewarded for her performance with an assignment as crew chief and plate umpire in the 2019 championship game. More than the calls, she remembers the time between innings.

“It was joy, like, ‘I can’t believe it,’” she said. “I remember the wave going around the stadium. You’re on this little field, and there’s like 25,000 people out there all doing the wave, and it’s going around and around and you don’t want it to end. You want ESPN to do another commercial to keep it going.”

A case could be made that the Little League World Series means more to the umpires than to the players.

Cooper remembered arriving to Williamsport ahead of the 2012 World Series, pulling into the parking lot and getting tears in his eyes.

Smith, who umpires about 150 games a year, was selected to work this year’s Little League Softball World Series, but he tore his Achilles’ tendon — not umpiring, but stepping in a ditch while mowing grass.

His lasting memory from the 2016 World Series is of the introductions of all the teams during the opening ceremony.

“The last team that comes out is the umpires, and the announcer says, ‘Can we get a round of applause for our volunteer umpires?’” Smith recalled. “We got a standing ovation.”

Then the games started. And the best the umpires could hope was that no one paid them much attention.