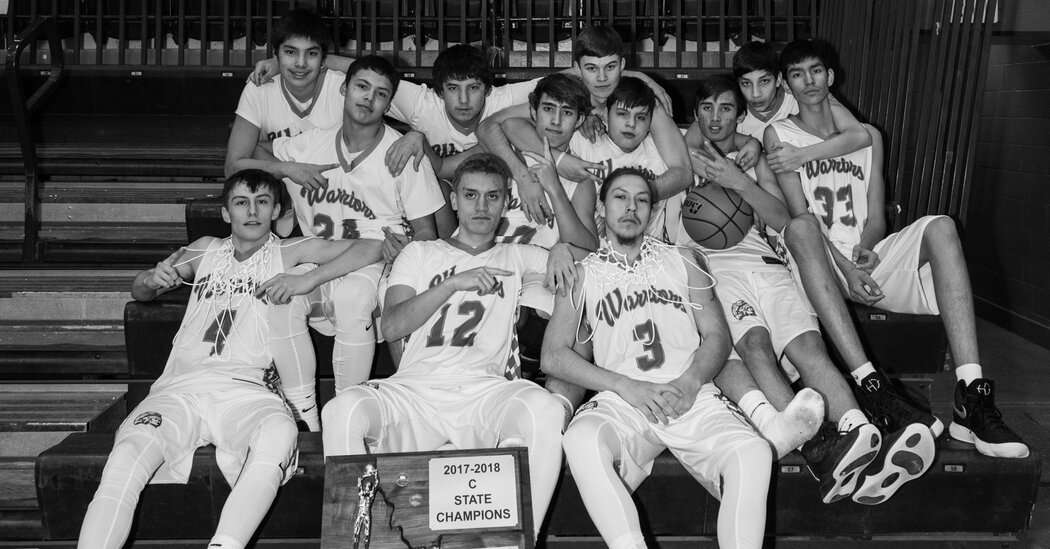 BROTHERS ON THREE
A True Story of Family, Resistance, and Hope on a Reservation in Montana
By Abe Streep

Inside a thunderous high school gym on a cold Montana night, Phillip Malatare, the virtuoso star of the Arlee Warriors, had the ball, which meant that good things were going to happen. His high school basketball team was fighting for a state championship while also shouldering the hopes of the entire Flathead Indian Reservation community, most of which seemed to pack the stands.

“Do not forget,” the Warriors’ coach reminded him, “you’re doing this for every kid in the world that’s ever looked up to a basketball player coming off the rez.” No pressure.

Basketball has long been a consuming passion on Native American reservations across the West and “rez ball” appears to be having a moment. There’s a Netflix documentary series about a Navajo basketball team, a well-regarded 2019 book, by the Times journalist Michael Powell, that follows the same team, and a forthcoming scripted series helmed by LeBron James and based on Powell’s reporting.

In “Brothers on Three,” the journalist Abe Streep follows the Arlee Warriors, a Montana high school team that embodies the high-speed, whip-pass, all-for-one spirit of reservation basketball. Streep follows the Warriors through a historic season, but his real interest lies in the lives of the players and their families on the Flathead Indian Reservation, along with the network of coaches, teachers and friends who invest so much of themselves in this scrappy, mighty basketball team. The kids were a diverse mix, but most of them were members of the Confederated Salish and Kootenai Tribes, and the reservation — being “a rez kid,” as the players would say — is central to the team’s identity.

Streep draws out the adolescent boys — no small feat — and writes evocatively about their community, their dreams beyond their tiny town and the pull that keeps them close. What emerges is an immersive portrait of a small tribal town where shared history runs deep, opportunity feels elusive, and basketball is a visceral expression of collective pride, hope and grit that Streep says sits “somewhere between escape and religion.”

Streep writes vividly about the game, but he strays far beyond the gyms. He goes hunting for elk antlers with Phil — “the boy in constant motion was absolutely still” — and he writes with feeling about the Montana landscape that anchors the Arlee community. “High in the mountains, under dark timber, trout slurped the surface of empty lakes. The boys had names for places that didn’t appear on maps.”

Despite the basketball victories, and there are a lot of them, this is a melancholy book that is haunted by the specter of suicide, a plague on many Native American reservations, including Flathead. It seems no family escapes unscathed, and Phil estimates that he knows 20 or 30 people who have taken their own lives.

Every suicide is a mystery and a tragedy unto itself, and Streep avoids sweeping explanations for how clusters work, or why reservations have been so hard hit. Instead, he relies on deep, personal conversations with parents and teenagers about despair, how to fight it and how to live with it. Just as effectively, he relies on his close observations of how suicide has seeped into so many corners of reservation life. In the locker room, Streep notes, there’s a flier for a suicide-prevention hotline taped to a mirror. “All but three of the tags on the bottom had been torn off.”

In one chilling incident, Greg Whitesell, a sweet and hard-working Warriors player, followed his thoughts to a dark place late at night. After he sent an ominous text message, two teammates showed up at his door uninvited. Greg believes they saved his life.

In the second half of the book, the Warriors become semifamous for recording suicide prevention public service announcements that draw attention from politicians, Nike executives and just about everyone they know. It becomes a particularly uncomfortable sequence, and a deeply American one, where the coach’s good intentions quickly get mixed up with the lure of commerce and viral fame. Even tragedy can be monetized, and Streep deftly chronicles the challenging terrain.

The book grew from an article Streep, a wide-ranging magazine writer, published about the Warriors for The New York Times Magazine in 2018. In “Brothers on Three,” Streep goes deeper, while keenly aware that he’s an outsider, a white man taking on the fraught assignment of writing about life on a Native American reservation. He frets about coming off like another one of those “outside journalists either applying a bore-like focus, without consent, to trauma, or romanticizing the culture.”

He avoids both traps, and, unlike so many reporters, he’s comfortable with what he doesn’t know. In one scene that struck me, he asks about shapes on the mountain that resemble a powwow dancer and a heart. Where did they come from? The man won’t tell him, and Streep seems fine with it. “Not everything is for everyone,” Streep writes, and the chapter ends.

The heart of the book lies with the boys — “juvenile constellations of hope,” as Streep tenderly calls them — who become impossible to resist. Though Phil stands barely six feet and seems light as a whistle, he looms largest with his unyielding energy, commitment and daredevil skills. “Every time he grabs that ball,” one fan explains, “it’s like he’s telling a story.” Much of the book’s tension lies in whether Phil will make it to the University of Montana’s basketball team, and there were times reading the book when I wanted to call the school’s athletic director myself.

Next to Phil stands Will Mesteth Jr., a battering ram of a player who wears long braids on the court and believes, accurately, it seems, that college recruiters won’t give him a fair chance. There’s gangly Isaac Fisher, tall enough to dunk but too timid until he’s not; and Coach Zanen Pitts, an inspiring figure who rallies the team and all of Arlee, but always seems to be eyeing an angle. They are passionate, flawed, insecure — humans, in other words.