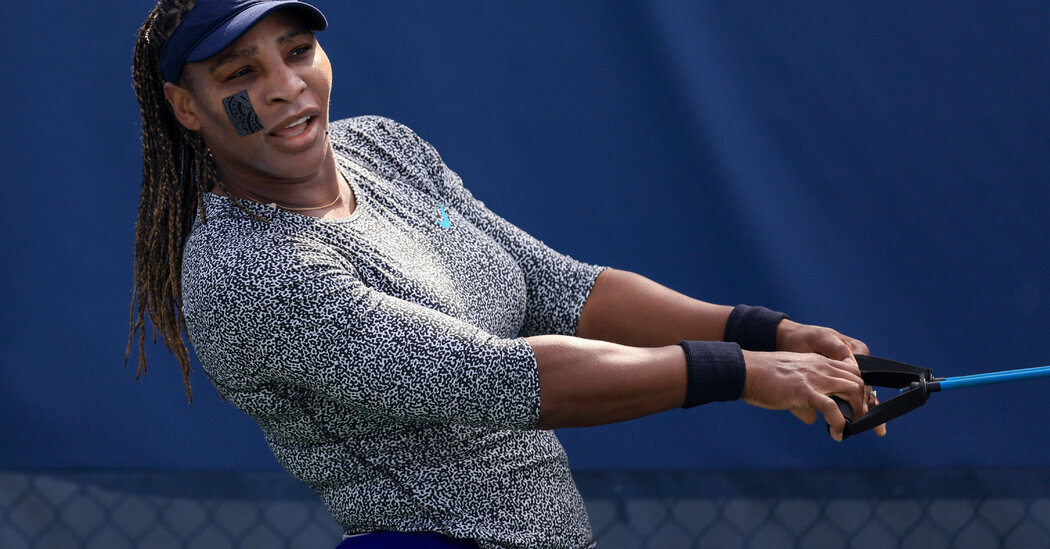 MASON, Ohio — The Serena Williams farewell tour is set to continue Tuesday at the Western and Southern Open.

But for how long?

The matchup — Williams vs. Emma Raducanu of Britain in the opening round — seems particularly well suited to the grand occasion that is Williams’s extended goodbye from professional tennis.

With 23 Grand Slam singles titles, she is unquestionably the greatest women’s tennis player of this era and one of the greatest athletes of any era. Raducanu, a cosmopolitan 19-year-old, shocked the world (and herself) by winning last year’s U.S. Open as a qualifier, and has the smarts and strokes to be one of the leaders of the game if she can adjust to her new status and resume smacking forehand winners and winning matches by the bunch.

The two champions at opposite ends of their careers have never played each other, and Raducanu is one of several young stars on the WTA Tour who have been hoping for a chance to face Williams before she walks away from the sport she long dominated. She wrote in Vogue, published last week, that the U.S. Open, which begins on Aug. 29 in New York, would be her last.

But the question is whether Williams’s body (she turns 41 on Sept. 26) can make it to her self-imposed finish line. Her match with Raducanu was originally scheduled, with great fanfare, for Monday night, with the tournament releasing a statement and informing fans on site for the qualifying rounds that Williams would be playing in that opening-night slot outside Cincinnati.

But after tickets, presumably quite a number of them, were purchased with Williams in mind, the match was bumped late on Monday to Tuesday with a vague explanation from the tournament. “On account of a number of factors related to scheduling, the Serena Williams-Emma Raducanu match will now be held on Tuesday,” the tournament said in announcing the Monday schedule.

People who had been informed about the situation but who declined to be identified because they were not authorized to speak on the matter, said the postponement was because of physical problems with Williams, who has had chronic knee tendinitis during her career and missed a year of competition after tearing her right hamstring at Wimbledon in 2021.

There was no confirmation of injury concerns from Williams or from tournament officials. Williams practiced on Sunday and Monday, and the match remains on the Tuesday night schedule. But Williams, if she wins, would have to play on consecutive days for as long as she remains in the tournament. With the U.S. Open in her sights, she will clearly not want to take undue risks that could jeopardize her moment in Queens.

The U.S. Open is her prime target as Eric Hechtman, her new coach, made clear in an interview last week in Toronto, where Williams lost in the second round of the National Bank Open in straight sets to Belinda Bencic of Switzerland.

It was the third singles match of Williams’s latest and surely last comeback, following an opening-round defeat to Harmony Tan, an unseeded Frenchwoman, at Wimbledon in June and a first-round victory in Toronto over Nuria Parrizas-Diaz of Spain.

“We had Wimbledon, and now we have Toronto and Cincinnati to build up for New York,” Hechtman said after the loss to Bencic. “I’d say Serena’s played better in each match, and obviously there are things she could do better out there, but I thought her opponent played really well tonight. What we’re going to do is take the positives and improve tomorrow. She’s a champion, and we’re going to keep getting better every day, not just every match, but every day and hopefully we can make some improvements by Cincinnati.”

Hechtman, a 38-year-old club professional who played at the University of Miami, has coached Venus Williams, Serena’ s older sister, since 2019 and began coaching Serena Williams earlier this year after she split with her longtime coach, Patrick Mouratoglou.

For years, Venus and Serena shared the same coaches, their father Richard and mother Oracene Price, and in the sisters’ developmental years, the Florida-based coach Rick Macci.

Working with Hechtman brings them, in a sense, full circle even if he generally trains with them separately to give them individualized instruction.

“I feel blessed and thankful that I’m in this situation,” he said. “It just fell into place, and I just hope I do them justice and help them as much as I can to go forward.”

Venus Williams, 42, who has yet to announce any timetable for her own retirement, received a wild card into the Western and Southern Open and has a daunting first-round match on the main stadium court against Karolina Pliskova of the Czech Republic, a former world No. 1, on Tuesday.

“Venus will do it how she wants to it when she wants to do it,” Hechtman said of her leaving the game. “She could play for five more years. Who knows?”

But her younger sister has made her intentions much clearer.

“Emotions are high,” Hechtman said. “Every athlete faces this time at some point, and I think it’s good Serena did it the way she did it. I thought her first-person essay was unbelievable, and it shows a lot about how she is but also how intelligent she is. We’ve got a couple of tournaments left and hopefully we can use that as one of her major weapons: not just her tennis but her brain power and how she uses it on court.”

The power gap that long separated Serena Williams from the chase pack has been closed. Her successors on tour thrive on torrid pace, from this year’s Wimbledon champion Elena Rybakina to the rising Americans Coco Gauff and Amanda Anisimova. It is harder to overwhelm this generation, in part because Williams set a new standard.

But Williams still has aura, particularly with those who grew up watching her from afar.

“When I look at her, I suddenly kind of forget that I’m here as world No. 1,” said Iga Swiatek, the Polish 21-year-old who was not even born when Williams won her first major title at the 1999 U.S. Open. “I see Serena and it’s, ‘Wow, Serena!’ You know? And I feel like I’m a kid from kindergarten just looking at her. So it’s tough. I haven’t talked to her, but I’m just trying to say hi.”

And though Williams is no longer as mobile at age 40, she can win points in a variety of manners, deploying drop shots successfully in Toronto and using her still-impressive first serve to secure quick points or set up next-shot winners.

“I think she’s serving well,” Hechtman said. “The pace is there on the serve, as it always has been through her career. She’s been improving since Wimbledon, and I think she’s definitely striking the ball cleaner, and I’d say the movement has improved. So, on all those fronts, it’s good.”

The intent is to have a better, fuller preparation heading into New York than she had heading into Wimbledon, where she had played only two doubles matches at a tournament in Eastbourne, England, with Ons Jabeur before facing Tan.

“We’re playing more events coming in,” Hechtman said. “So I think that’s useful and what we need to be doing. It’s like warming up for a match, right? You don’t just start the match cold. You’ve got to get the rhythm, and she’s getting her rhythm with the more matches she plays.”

Body willing, she will play at least one in Mason, Ohio.