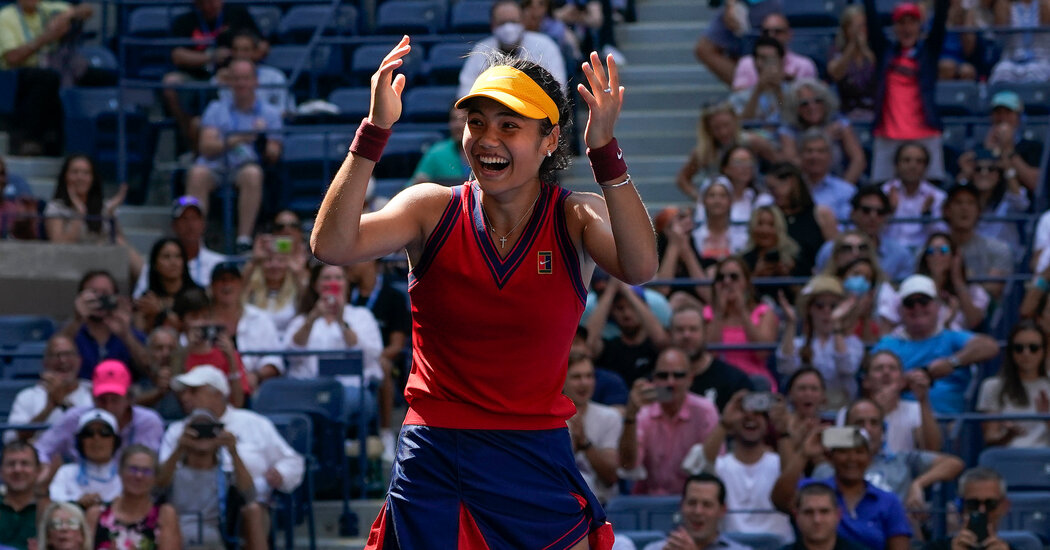 There they go again.

For the second consecutive day at the U.S. Open — or maybe it was the fifth, or the 10th, depending on when the counting started — a teenage woman did the thing she was not supposed to do.

Just as Leylah Fernandez of Canada did on Tuesday, Emma Raducanu of Britain bulldozed her way through a player who had every right to believe the day would belong to her, disposing of 11th-seeded Belinda Bencic of Switzerland, 6-3, 6-4, in 82 minutes, and giving the U.S. Open two semifinalists who are unable to celebrate their success legally with an alcoholic beverage.

How absurd is all of this? Consider that Raducanu is ranked 150th in the world and played three qualifying matches just to secure a spot in the main draw. She clearly did not expect to make it: She had booked a flight home for immediately after the qualifying tournament.

She continues to be as shocked by her success as anyone.

“I didn’t expect to be here at all,” Raducanu said after she became the first qualifier to make it to the U.S. Open semifinals in the Open era. “Out there on the court today, I was saying to myself, ‘This could be the last time you play on Ashe, so might as well just go for it and enjoy everything.’”

As impressive and surprising as Raducanu has been in her first U.S. Open, until Wednesday she had yet to beat a seeded player. Fernandez had. She entered her quarterfinal on Tuesday after beating the defending women’s champion, Naomi Osaka, and the German veteran Angelique Kerber, a former world No. 1 and three-time Grand Slam tournament champion. Fernandez, ranked 73rd, backed up those wins with a stirring three-set upset of fifth-seeded Elina Svitolina of Ukraine.

Across the net from Raducanu on Wednesday stood Bencic, the recently crowned Olympic gold medalist, a smooth and powerful 24-year-old from Switzerland who has been a mainstay of the top 20 the past three years, rising as high as fourth in the world rankings in February 2020.

She broke Bencic in the fifth game of the second set and largely cruised from there, making a game that she has had little experience with at the top level of the sport look easy.

Unlike Fernandez, who has specialized in a form of tennis that resembles opera — long afternoons and evenings filled with wild swings and rousing moments of drama — Raducanu’s New York experience has been a series of routine days at the office, of making players with far more experience than she has look bad at tennis.

“I just wish I could have made it a little bit harder and played better or played more my game,” a disappointed Bencic said after the match.

Raducanu does not do tennis attrition. She plays as though she knows the hours after her matches will be filled with signing autographs, taking selfies with a legion of fans and charming an unrelenting beast known as the British sports media. She finishes matters on the court quickly.

Including the qualifying tournament, she has played eight matches on this trip to New York and has yet to drop a set. It is a bizarrely charmed run. On match point against Bencic, she smacked a one shot off the rim of her racket, then watched it loop into the back corner of the court.

“She’s problem solving, adjusting her game, playing on her terms, and she has a big enough game to just beat people,” Tim Henman, the former British star who does tennis commentary for Amazon Video, said of Raducanu.

On the surface, Fernandez and Raducanu might appear similar. Teenage women — they were both 18 until Fernandez turned 19 on Monday — they have spent the past 10 days capturing the hearts and imaginations of New York’s boisterous and emotional crowds with an ease that Novak Djokovic can only dream of. They have been competing in the same junior level tournaments for years.

Also, both are the product of mixed-race parents — Raducanu’s father is Romanian and her mother is Chinese, while Fernandez’s father is from Ecuador and her mother is Filipino. Their families have since moved from the countries where their prodigies were born. Raducanu was born in Canada but lives in England. Fernandez spent much of her childhood in Montreal but lives and trains in Florida.

The similarities largely end there.

Raducanu is listed at 5 feet 7 inches, but presents as far more imposing than that. She is long and lean and glides across the court, staying low to the ground, sometimes scraping her knees on the court as she squats to rescue a backhand in the flashy style of the retired Polish player Agnieszka Radwanska.

She often rifles the ball within inches of the net to near the baseline on the other side, then pushes forward, hunting for the first chance to end the point as quickly as she can. She does not hit four shots to set up the winner on the fifth one. If there is a hint of an opening she grabs it, winding up and using the fluid leverage of those long limbs to whip a shot at the corner of the court.

Fernandez is listed at 5-6, but the power she generates seems like a mystery of tennis physics. She can crank her serve into triple digits, and taking her spot on the baseline, which she rarely abandons, she can fire lasers, especially off her forehand, even though she barely takes a backswing.

Raducanu cannot stop saying how shocked she is by her success. Fernandez said she expected to beat Osaka as soon as she walked onto the court. After her win over Kerber she said she had long been confident that her game would bring her to this level.

Raducanu has spent the past years balancing school and tennis, attending the Newstead Wood School in London, and took her university admission exams earlier this year, around the same time she was making her debut in top-level tournaments on the women’s tour. She got into Wimbledon on a wild card that she earned with a couple of wins at a lower-tier tournament in Nottingham in June.

Fernandez has been all about tennis for years. This is her seventh Grand Slam tournament.

Raducanu’s parents work in finance. They are taking in her success from home in England, unable to travel to the United States without a special exemption that takes several weeks to process and did not seem as if it would have been worthwhile. She said she had spoken to them only sparingly lately. Raducanu joked that they “ghosted” her when she was trying to text them after her match on Monday.

During the last two years she has worked with a series of coaches in the British tennis aristocracy, including Nigel Sears, the father-in-law of Andy Murray.

Fernandez’s mother has been courtside at all her matches. Her father, Jorge, is also her coach, and he speaks with her every day, sending her game plans for her next match. She has developed largely without the involvement of Canada’s national tennis program.

Now, it’s on to the rarefied ground of the semifinals of a Grand Slam. Fernandez will face Aryna Sabalenka of Belarus, the No. 2 seed. Raducanu will face the winner of Wednesday night’s match between Maria Sakkari of Greece and Karolina Pliskova of the Czech Republic.

After that, win or lose, the klieg lights that always follow the kind of breakout performances Raducanu and Fernandez have achieved will undoubtedly arrive, an experience that has swallowed plenty of teen phenoms whole as their lives begin to fill with obligations to sponsors and to live up to the expectations that their stirring performances have wrought.

“I just really hope that everyone will protect them,” Bencic said of Fernandez and Raducanu, noting how good for tennis their success could be. “Not try to kind of, not destroy but, put so much pressure and so much hype around them so it just gets too much.”

That is not how it usually goes, but for now, it’s nice to think it might.