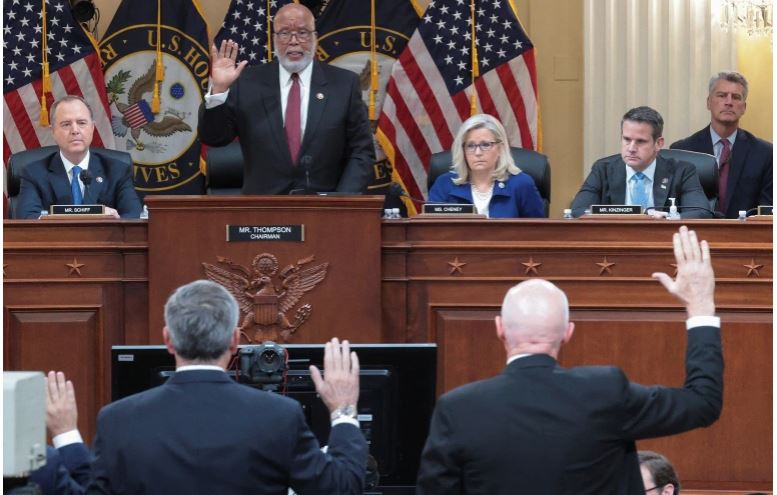 In its fourth hearing of the month, the congressional committee investigating the January 6, 2021 attack on the US Capitol featured emotional testimonies from witnesses who highlighted former President Donald Trump’s efforts to overturn the 2020 elections.

Trump – once again – was the main focus of the session on Tuesday, which examined his push to pressure local and state officials to reject the election results.

In the US federal system, voters elect the president through their states. Each state is assigned a number of electors proportionally to its population. Candidates who win a state carry its electors.

Trump’s pressure campaign and fraud allegations targeted swing states that he won in 2016 but lost to President Joe Biden in 2020.

On Tuesday, the panel heard from several witnesses in those states who described Trump’s effort and the toll it took on them and their families.

Here is a look at five key takeaways from the fourth public hearing this month:

Trump planned to replace Biden’s electors
The panel highlighted efforts by Trump and his aides to illegitimately replace electors from states that Biden had won – a scheme that one witness, Arizona House Speaker Rusty Bowers, described as a “tragic parody”.

The committee played a video detailing what it called the “fake electors” plot.

“President Trump and his campaign were directly involved in advancing and coordinating the plot to replace legitimate Biden electors with fake electors not chosen by the voters,” Congressman Adam Schiff, who played a leading role at Tuesday’s session, said.

The video featured former Trump lawyers who said that they distanced themselves from the scheme and warned that it was illegal.

“The Select Committee received testimony that those close to President Trump began planning to organise fake electors for Trump in states that Biden won in the weeks after the election,” panel aide Casey Lucier said in a video played at the hearing.

Bowers also told the panel that Trump’s former lawyer, Rudy Giuliani, suggested to him on a call to hold a hearing to remove and replace Biden’s electors after the current president won the state.

Top Arizona legislator says Trump wanted him to violate oath to US Constitution
Bowers, a Republican, struggled to hold back the tears as he described pressure by Trump’s aides to get him to overturn Arizona’s election results and back the “fake electors” plot.

“You’re asking me to do something that’s never been done in history, the history of the United States,” Bowers recalled telling Giuliani. “And I’m going to put my state through that without sufficient proof… No, sir.”

Bowers added that he did not want to be “used as a pawn” in Trump’s plan to remain in power.

“You’re asking me to do something against my oath and I will not break my oath,” Bowers said he told Giuliani.

With Biden’s 2020 victory, the southern state went to a Democratic presidential candidate for the first time since 1992. And so, the panel said Trump had a “particular obsession” with Georgia.

“All I want to do is this: I just want to find 11,780 votes, which is one more than we have because we won to state,” Trump tells Brad Raffensperger, Georgia’s secretary of state, in one recording.

In a separate conversation with Frances Watson, the chief investigator for Raffensperger, Trump directly pleads for action to revoke the election results.

“Whatever you can do, Frances,” Trump tells Watson on the tape.

Schiff called Trump’s efforts to overturn the vote a “dangerous cancer on the body politic”.

“If you could convince Americans that they cannot trust their own elections, that anytime they lose it is somehow illegitimate, then what is left except violence to determine who should govern,” he said.

Trump’s pressure campaign sparked threats against election officials
Several officials testified on Tuesday that Trump’s efforts to get them to back his false election fraud allegations resulted in threats and abuse by his supporters against them and their families.

Wandrea ArShaye “Shaye” Moss and her mother Ruby Freeman, former election workers in Georgia’s Fulton County who were singled out by Trump and his team over bogus election fraud claims, underscored the severity of being targeted by the then-president.

Moss, who is Black, told the committee that being falsely identified by Trump’s aides as someone who engaged in election fraud turned her life “upside down”. She said she received a barrage of racist and threatening messages after the election.

“I no longer give out my business card. I don’t transfer calls. I don’t want anyone knowing my name,” she said.

“I don’t go to the grocery store at all. I haven’t been anywhere at all. I gained about 60 pounds. I just don’t do nothing anymore. I don’t want to go anywhere. I second-guessed everything that I do,” Moss added.

For her part, Freeman, whose recorded testimony was played on Tuesday, said she struggled after being mentioned by name by Trump.

“I’ve lost my sense of security all because a group of people starting with Number 45 and his ally Rudy Giuliani decided to scapegoat me and my daughter Shaye to push their own lies about how the presidential election was stolen,” she said referring to Trump, who was the 45th president of the United States.

Freeman added that she no longer feels safe anywhere.

“Do you know how it feels to have the president of the United States target you?” Freeman said.

“The president of the United States is supposed to represent every American not to target one. But he targeted me, Lady Ruby – a small business owner, a mother, a proud American citizen, who [stood] up to help Fulton County run an election in the middle of the pandemic.”