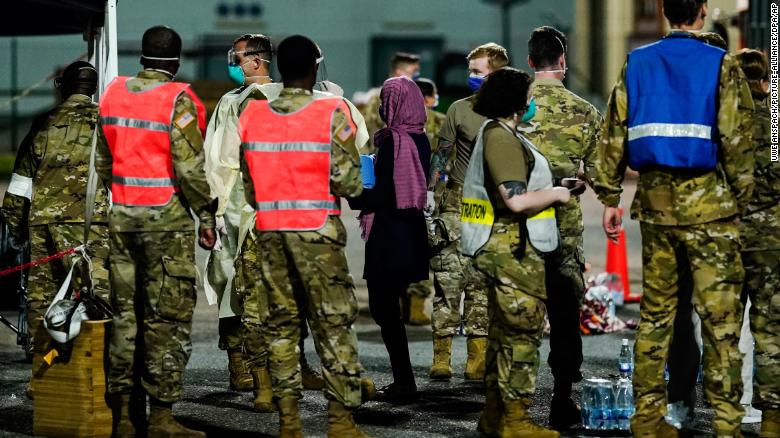 ‘That was a newborn baby’: CNN reporter reveals dire situation at airport 03:41
Ramstein Air Base, Germany (CNN)A little girl in a gold sequined dress and sneakers can’t hide the huge smile on her face, as her temperature is checked upon arrival at the Ramstein US Air Base in southwestern Germany on Saturday.

Not including storage facilities and air fields.

Elsewhere, a wall of folding military cots are distributed, and dozens of portable toilets are lined up.
Among the evacuees is Haseeb Kamal, age 31. Kamal is a US citizen from Richmond, Virginia, who came back to Kabul to work as a translator and get married.
Kamal’s wedding was one week ago, on August 14. When the Taliban entered the city, he took his new wife and family to the airport. But there was such chaos they got separated. In the end, he could only pull his father and older sister through the gates, he told CNN.
“I rushed like everybody else,” said Kamal, describing frantic scenes at the airport. “US forces were shooting fire, Taliban and Afghan forces too… People were getting hurt left and right. It was a bad situation,” he said.
Kamal’s wife and the rest of the family are stuck in Kabul. The only time he’s spoken to them since they were separated was in a two-minute conversation Saturday morning when he landed in Ramstein. They are safe, but frightened, he said.
Kamal said his family asked him what was going to happen to them. His only answer was: “I don’t know.”
Both Kamal and his brother worked as translators, and his father was a colonel in the Afghan army. They fear the Taliban will target them. And while he’s grateful to the evacuation effort, he says it’s moving too slowly.
Back in Kabul, there is still deep uncertainty for thousands still hoping to catch a flight like his.
Volatile situation at Kabul airport
Non-governmental groups and lawmakers have been racing to get those in danger out of Afghanistan, finding some success but also crushing frustration as people have been turned away from the airport or, worse, beaten by the Taliban as they try to flee Afghanistan.
Taliban checkpoints and chaos at the gates outside the airport have stopped many thousands from getting inside the facility, let alone on planes, subjecting them to harsh conditions and violence from the Taliban.
Meanwhile, Mullah Abdul Ghani Baradar, co-founder of the Taliban movement, has arrived in Kabul from Kandahar in southern Afghanistan, according to a tweet from the Taliban on Saturday. Baradar led negotiations in Doha on behalf of the Taliban and arrived in Afghanistan last week for the first time in 20 years.
US announces new destinations for evacuees as Kabul airport confusion continues
US announces new destinations for evacuees as Kabul airport confusion continues
On Saturday, the US Embassy in Kabul issued a security alert stating that US nationals should not come to Hamid Karzai International Airport unless instructed by the US government.
The number of people at the airport is now 14,000, a source familiar with the situation said Saturday. Numbers given by officials on the base are often hard to reconcile and change frequently.
The source said flights were going again to Qatar, Europe, possibly Hungary, and that Kuwait had agreed to accept special immigrant visa applicants, provided they were en route to US.
Over the past day, the US military has evacuated approximately 3,800 people on six C-17 planes and 32 charter planes from Kabul airport, Gen. Hank Taylor, Deputy Director of the Joint Staff for Regional Operations said on Saturday.
Since the end of July, 22,000 people have been evacuated — 17,000 of those have been evacuated over the past week since August 14. Of those 17,000, 2,500 are US citizens, Taylor said.
C-17 military planes are now “moving between Qatar and Germany,” Taylor added.
Some, like those arriving in Ramstein, have been lucky enough to catch one of those planes.
This story has been updated to correct the first name spelling of one of the interviewees.
CNN’s Nick Paton Walsh, Ellie Kaufman and Amy Cassidy contributed to this report