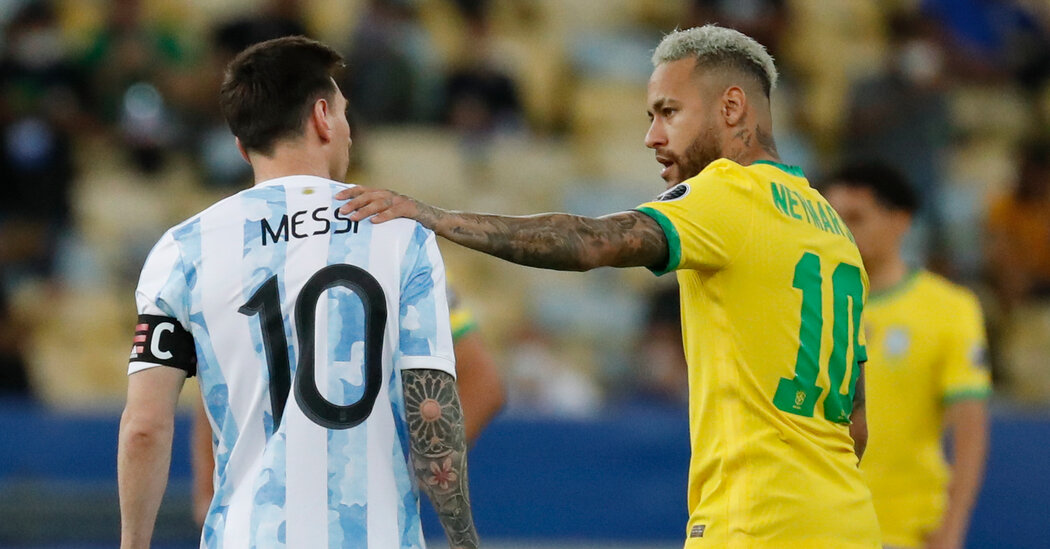 A meeting was called, discussions were held, and groups representing some of the world’s biggest soccer clubs and leagues were given a chance to have their say.

Their concerns were immediate: Extra dates being proposed for qualifying matches for the 2022 World Cup would badly affect their operations, they said, with dozens of their players from South America, including Lionel Messi and Neymar, set to miss crucial league games because of their national team commitments.

FIFA, world soccer’s governing body, reassured the officials from the clubs and the leagues. Do not worry, the clubs were told, FIFA would consider the needs of all the affected groups before deciding how to squeeze in the extra dates, which were needed to accommodate matches postponed by the pandemic.

But in the end, FIFA chose what worked best for FIFA. Ignoring entreaties from clubs and leagues around the world, FIFA and its regional confederation for South America, CONMEBOL, went ahead and added two extra days for qualifying matches in September and October. The clubs, not World Cup organizers, would just have to adjust.

The outcome was perhaps the clearest example of the immense power FIFA wields when it comes to directing a sport for which it is the chief governing body and also the organizer of the World Cup, one of the biggest sporting events on the planet. While everyone involved agreed something needed to be done to find a spot for the games, which had been postponed earlier this year because of the coronavirus pandemic, only FIFA had the final say on when they would take place.

While the leagues, clubs and players’ unions are often given a hearing, they had little say in the matter beyond expressing impotent frustration at the outcome. That was what a lobbying group, the World Leagues Forum, did this month when it noted FIFA’s ruling would most likely leave clubs in Europe and elsewhere without hundreds of millions of dollars’ worth of talent for key early-season games because the new dates — and player travel — would overlap with domestic schedules.

“As a governing body, FIFA should be trying to find the best solution for the entire football community,” read the statement by the World Leagues Forum, an umbrella organization for about 40 top leagues. “Instead, FIFA has decided to impose the worst possible option with practically no notice. This poses an obvious governance issue which will have to be addressed.”

The growing tension comes amid a wider discussion about the future of soccer, with FIFA pushing for new competitions and new revenue streams and even evaluating the possibility of staging the World Cup every two years. That discussion, which officially is related to soccer’s calendar for the next decade starting in 2024, is expected to conclude by the end of this year.

The talks follow perhaps the most fractious period in modern soccer history, encapsulated by a failed attempt by a group of leading European clubs to form a closed superleague and break away from the century-old structures that bind the game together.

While their efforts did not ignite the revolution they had designed — their so-called Super League collapsed in a matter of days — their revolt did highlight the unequal distribution of power in global soccer: While teams and leagues invest billions of dollars in the game, they have little say over how it is run.

At present, FIFA has signed so-called memorandums of understanding that provide a framework that allows players, who in the main are trained and compensated by their clubs, to play for their countries. Under the terms of that relationship, clubs are required to release players for national team duty for up to 10 days for each international window.

For years, that agreement largely held firm, until the coronavirus changed everything and cut the time available to fit in matches before the World Cup at the end of 2022. Instead of two games and their accompanying travel in each window, national teams now would be scheduled for three.

At a meeting on July 27, FIFA, represented by Victor Montagliani, its vice president and the head of the regional body for North and Central America, met with officials representing the leagues and clubs. All agreed that a solution needed to be found in order for South America’s qualifiers — backed up by pandemic-related cancellations — to be completed in time for the World Cup.

An official from CONMEBOL, according to notes taken at the meeting reviewed by The New York Times, explained that traveling to and within South America was extremely challenging, and that the confederation required three extra days in September and October to ensure the games could be played safely.

A representative for the leagues said that would not be acceptable, since it would mean scores of players would be unavailable for at least one weekend of league play, and perhaps more, because of quarantine requirements upon their return to their clubs. He said the leagues could accommodate one extra day, and suggested that the games be played in a secure bubble to minimize travel. At the same meeting, a representative of the players’ union, FIFPro, reminded FIFA of the health effects on athletes of traveling long distances and playing so many games in quick succession.

A few weeks later, on Aug. 7, FIFA announced its decision. In a meeting of its most senior body, the Bureau of the FIFA Council — a group made up of the FIFA president, Gianni Infantino, and the leaders of the six regional confederations — it was decided that the South American qualifiers in September and October would be triple match days — three matches in one international break — and clubs would be required to release players for two additional days. Only UEFA, Europe’s governing body, voted against the plan. Previously, it and CONMEBOL had worked together to oppose some of Infantino’s suggestions.

“The addition of two days will ensure sufficient rest and preparation time between matches, reflecting the longer travel distances required both to and within South America, thus safeguarding player welfare by mitigating the negative consequences of this more intense schedule, while ensuring fair competition as well as a prompter return to their clubs of the players involved,” FIFA said in a statement.

That hardly mollified the clubs. To make matters worse, FIFA said it had scrapped a regulation that allowed teams whose players faced quarantines upon return to withhold releasing them for national team games.

“From a regulatory standpoint, this means that FIFA compels players to play for their national team even if they are restricted afterward from playing for their club for several games,” the leagues said in a letter addressed to the FIFA president. The effect, the leagues said, would be quarantine measures that would result “in the disruption or discontinuation of domestic leagues.”

With the first games of the September window just over a week away, leagues and clubs are weighing their options. Under FIFA’s current regulations, they may not have many: They will be sanctioned if they refuse to release their players for the looming international window. The complaint would be brought by national soccer associations that comprise FIFA. The body that would rule on the complaints? FIFA.