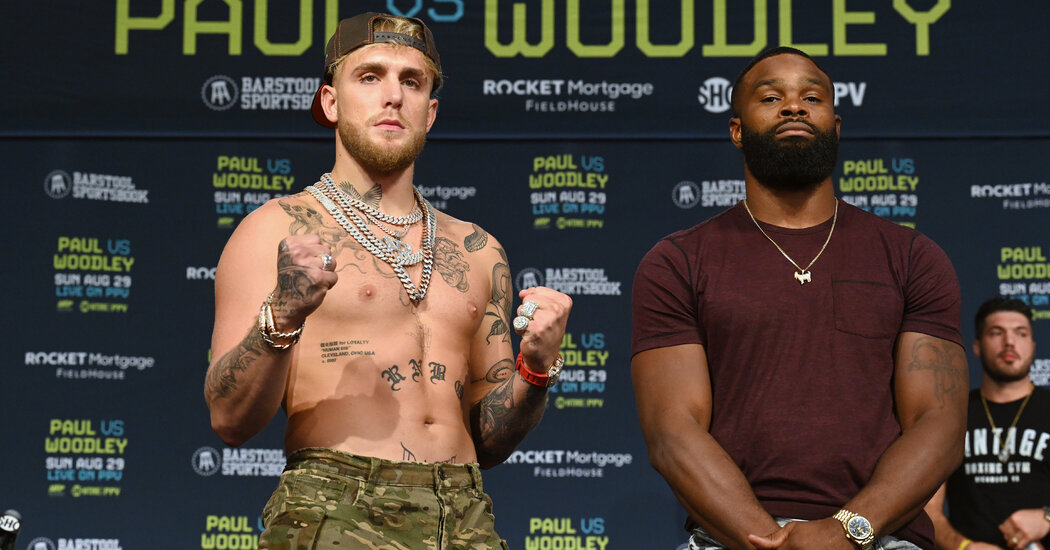 Jake Paul has not had a quiet moment to think.

Between traveling to Miami to watch his older brother, Logan, fight Floyd Mayweather Jr. in June, training in Puerto Rico for a fight on Sunday and stirring controversy on social media, Paul has kept busy. He has not had time to assess his grip on combat sports since turning to boxing in 2018 or how he has changed the landscape since then.

“I think sometimes when you reflect, it’s good, but sometimes it’s bad,” Paul said in an interview. “So right now, I’m just head down. The train’s moving 100 miles per hour and I’m not slowing down for anybody.”

In just three fights, Paul, 24, has transformed from a novice to a main, if contentious, draw. Hard-core fans despise his ascent, some claiming his large social media following and celebrity — rather than years of traditional hard work — gifted him a pathway to the ring.

He also has enemies in the mixed martial arts community: Dana White, the president of Ultimate Fighting Championship, and its star Conor McGregor and other prominent fighters have insulted him. Paul said he enjoyed his adversarial role, and it is one he looks to continue.

On Sunday, he will face Tyron Woodley, the former U.F.C. welterweight champion, at Rocket Mortgage FieldHouse in Paul’s hometown, Cleveland. It is the first of Paul’s multifight contract with Showtime, which will sell the pay-per-view bout for $59.99. The scheduled eight-round boxing match will be contested at a 190-pound catchweight.

Woodley, 39, offers Paul his toughest challenge yet as a fighter. But if Paul wins, he said it will be proof that he can compete with top-tier talent.

“I’m going to show that even the highest higher-ups don’t have hands,” Paul said, referring to their fight skills. “I’m going to continue to expose that. I’ve done it once, and I’ll do it again.”

Paul and his brother lead a new trend among combat sports that blurs the lines between competition, entertainment and spectacle. In June, Logan, 26, fought Mayweather in an eight-round, non-sanctioned exhibition boxing match at Hard Rock Stadium in Miami. The particulars at first seemed outrageous: The elder Paul had fought just once before professionally, while Mayweather, viewed as the one of the greatest boxers ever, boasted a spotless 50-0 record.

But Logan survived until the final bell against most predictions, not even falling to the canvas.

Some fans on social media expressed their disappointment, claiming the fight was rigged. Mayweather historically has fought with a defensive, elusive style rather than seeking knockouts, but few expected that Paul, even with a nearly 35-pound weight advantage, could withstand eight rounds with him.

Still, Paul’s relative boxing acumen was probably beside the point. The fight recorded over one million pay-per-view buys, overwhelming Showtime’s servers so drastically that they crashed, forcing the company to offer patrons a refund.

“This is a new time, a new era, a new chapter in boxing,” Paul said. “There’s a new way to go about things. There’s new kids on the block.”

Paul and his brother amassed their fame through social media, starting with Vine, the now-defunct video-sharing app, and then pivoting to Instagram and YouTube. Jake now has nearly 17 million followers on Instagram. After winning his first professional fight in January 2020, his stock rose quickly after he blasted the retired N.B.A. player Nate Robinson and the retired mixed martial arts fighter Ben Askren, both by knockouts. He soon signed a contract with Showtime and scheduled Woodley, a friend of Askren, as his next opponent.

“He puts on exciting events,” Stephen Espinoza, the president of Showtime Sports, said in an interview. “He draws a lot of attention, drives big business and people find him entertaining, both in and out of the ring. That’s a recipe for the type of programming that we want to deliver.”

Espinoza said at first he was skeptical but soon warmed to the idea of signing Paul after a few discussions. He said he could see Paul’s dedication to boxing, such as his training sessions in Puerto Rico and his knockout power. His level of competition increased with each fight, with Woodley being a legitimate threat.

Woodley first fought the U.F.C. in 2013 and became the 170-pound champion three years later. He defended the belt four times but had four consecutive losses. He left the promotion this spring after his contract expired and said he wanted to attempt a career change to boxing. After the Askren fight, the matchup with Paul made sense, Woodley said. He began training with Mayweather and said he was excited to focus only on striking rather than all the other mixed martial arts fight disciplines, such as jiu-jitsu.

“I have no smoke with the U.F.C.,” Woodley said in an interview. “I was blessed to go over there and make a fortune and let the world know who I am. Now it’s time to keep the machine going.”

Tensions between Woodley and Paul increased after they announced the fight, reaching peak levels this week when a member of Paul’s entourage insulted Woodley’s mother shortly after a news conference.

It all fuels the intrigue of Sunday night. Espinoza said regardless of the outcome, he expected Paul to continue to fight quality foes. Paul agreed. On Instagram, he posted a list of potential opponents that included boxer Canelo Alvarez, McGregor and Kamaru Usman, the current U.F.C. welterweight champion. Paul said he does not care who is next.