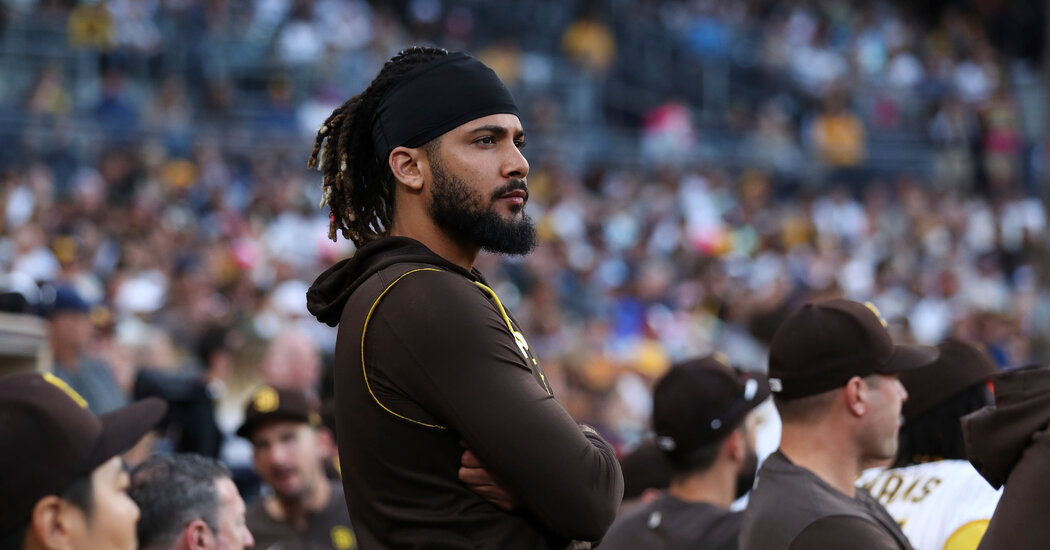 Statues can be made from many different materials: stone, bronze, concrete, wood, and so on. The idea is to use something durable and lasting, something befitting a permanent monument that often serves as a point of pride.

In other words, clay would be a bad choice. That is where the expression feet of clay comes from, connoting a weak foundation, a flaw that could bring down a person of honor. Which brings us to Fernando Tatis Jr.

When the San Diego Padres signed Tatis to a 14-year, $340 million contract in February 2021, he matched the boldness of their investment with a statement just as audacious: “I want the statue.” Then Tatis led the National League in home runs and nearly won a Most Valuable Player Award, all before his 23rd birthday.

If it seemed too good to be true, maybe it was. Major League Baseball suspended Tatis for 80 games on Friday, ending his season before it began and casting doubt on the wisdom of the Padres’ commitment to him. Tatis tested positive for Clostebol, a performance-enhancing drug.

The suspension ends a troubling season for Tatis, who had wrist surgery in March after injuring himself in the off-season by falling off his motorcycle — more than once, he acknowledged. He began a rehabilitation assignment last week, but his four games with Class AA San Antonio will constitute all of his performance for 2022.

The Padres had 48 games remaining on their schedule at the time of the announcement, meaning that Tatis’ suspension will bleed well into 2023. The absence of so many games on his ledger will be a testament to the recklessness of a player who had been hailed as a prominent part of baseball’s future.

“It turns out that I inadvertently took a medication to treat ringworm that contained Clostebol,” Tatis said in a statement issued by the M.L.B. Players’ Association. “I should have used the resources available to me in order to ensure that no banned substances were in what I took. I failed to do so.”

He apologized to the Padres, the league and the fans, and while he pointed out that he had never failed a drug test before this, he added that he had “no excuse for my error.” Tatis said he initially appealed the suspension, but dropped it because his carelessness caused the result.

“I am completely devastated,” the statement said.

So are the Padres, whose general manager, A.J. Preller, told the San Diego Union-Tribune that the team needs to rebuild trust with its cornerstone player: “Over the course of the last six or seven months, I think that’s been something that we haven’t really been able to have.”

Preller made the splashiest move of the Aug. 2 trading deadline, acquiring the superstar outfielder Juan Soto from the Washington Nationals. Soto, who cannot be a free agent until after the 2024 season, headlined a summer haul that also included first baseman Josh Bell, closer Josh Hader and the utility man Brandon Drury. When the Padres won Soto’s debut in a rout — helped by Drury joining the “Slam Diego” club with a grand slam — the sold-out crowd might have felt an added high: all this, and soon Tatis, too!

Reality intruded in the Padres’ next series, though, on the road against the Los Angeles Dodgers, which ended in the Dodgers’ emphatic three-game sweep.

The Padres still held one of the N.L.’s three wild-card spot when M.L.B. announced Tatis’s suspension, but it was a loose grip: just one game ahead of the Milwaukee Brewers in the loss column. And this is a team that went 11-30 down the stretch to blow a playoff spot last season, with Tatis hitting .245 in those final 41 games.

With the season slipping away in September, Tatis got into a dugout argument with the veteran third baseman Manny Machado, who screamed and cursed at him. “It’s not about you,” Machado scolded Tatis after Tatis had pouted about a called third strike. “You go play baseball,” he added.

Even so, Tatis finished the season with an impressive set of statistics: a .282 average, a .975 on-base plus slugging percentage, and 99 runs scored and 97 runs batted in to go with his 42 homers. He finished third in the voting for the N.L. M.V.P., behind Philadelphia’s Bryce Harper, the winner, and Soto, the runner-up.

Tatis followed up by evidently overestimating his motorcycling skills. But he still had a chance to make the year special, to become the final addition to a fortified roster chasing the first championship in franchise history.

The two Padres players honored with statues at Petco Park, Tony Gwynn and Trevor Hoffman, could not deliver it. Neither could another Hall of Famer, Dave Winfield, the first player depicted in a Padres cap on his plaque. Tatis has time to win a title, but his legacy — the statue, the day in Cooperstown, the validity of his achievements — may never develop the way he expected.