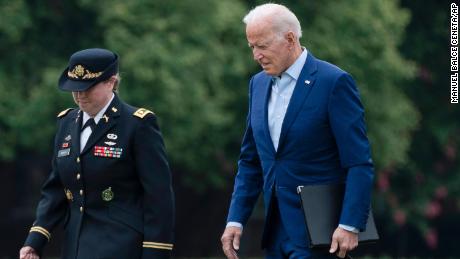 President Joe Biden just got some deeply unwelcome news: The pandemic that he was elected to end could drag on deep into a midterm election year, with all the political and economic destruction that could bring.

The warning by the government’s top infectious diseases expert, Dr. Anthony Fauci, that the crisis won’t be under control until spring of next year — and even then, it will need most American vaccine skeptics to change their minds — came as a severe jolt to a weary nation.
It also meant that Biden’s best-laid plans of triumphing over the pandemic and riding an economic wave into the campaign for congressional election results in November next year now look at risk.
A pandemic that stretches through another grim winter and beyond risks slowing the economic recovery on which Biden is relying for a strong performance next year. It could demoralize the public and trigger the kind of sour mood among the electorate that always spells danger for incumbents. Already, the President’s personal approval ratings and public confidence in his management of the pandemic have been ebbing, according to recent NBC and CBS polls.
Biden’s partial declaration of victory over the virus on July Fourth looks highly premature — as do earlier US Centers for Disease Control and Prevention relaxations of mask guidance.
“As we get into the spring, we could start getting back to a degree of normality, namely reassuming the things that we were hoping we could do — restaurants, theaters, that kind of thing,” Fauci told CNN’s Anderson Cooper.
Click button to enter email to sign up for CNN’s Meanwhile in America newsletter.
close dialog
Most Americans, encouraged by Biden himself, had already expected that kind of normality to be restored and may be in no mood to contemplate months more of deprivation. The spike in Covid-19 cases that has hit many areas of the country has already turned what was sold as a summer of freedom from the virus into a replay of some of the worst parts of the pandemic as hospitals throughout the South are overrun by Covid patients. And conservatives have already long ago turned against Fauci, one of the world’s most respected public health experts, and he is a top target of right-wing media.
The last 17 months that changed the daily fabric of American life have been far from predictable. And there is some data from abroad — albeit in more vaccinated nations like Britain and Israel — that suggests the current Delta variant wave of the virus could ease or may not produce the same level of deaths as earlier surges. If so, its political impact could be mitigated.
But even the prospect that the end of the battle against Covid-19 could be many, many months away represents a nightmare political scenario for the President and his Democratic Party, already facing historic headwinds in trying to keep control of Congress. They will now face the possibility of having to do so in a nation even more exhausted by a crisis that has already cost more than 620,000 lives and that has become more politically divided by the virus every month it rages on.

A new challenge for the President