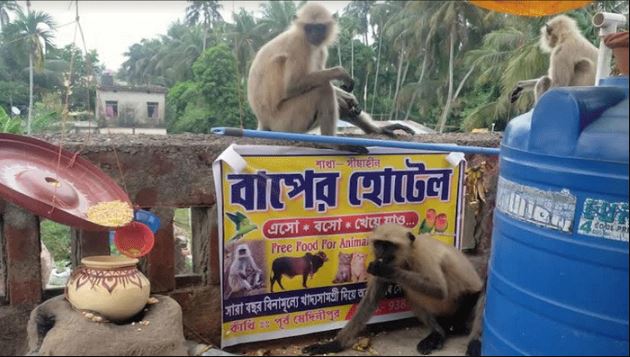 A different kind of hotel has been opened. Wherever you want to eat, you don’t have to pay any money to eat. Again, the hotel is open 24 hours a day. From the first day, a lot of crowd has started in the hotel. But even if people serve food in this funny hotel, their eating is completely forbidden. Because it’s not a human, it’s an animal hotel. Shyamal Jana, a resident of East Midnapore district in West Bengal, India, has gifted this unique hotel to his wife on their wedding anniversary. The name of the hotel is ‘Father’s Hotel’.

On the occasion of the wedding anniversary, 31 bot and ash trees were planted
In the scorching heat, they went to ‘Father’s Hotel’ and got food and drinking water as they wished. The hotel menu includes bananas, grapes, cucumbers, green gram, wheat, sunflower seeds, corn, nuts and drinking water for the animals every day. The dishes are served in colorful designs, in earthenware pots of various sizes. Located on the open roof of the house, this hotel is open 24 hours a day. Pakakala is arranged on ropes for Hanumans.

In the context of ‘Father’s Hotel’, Shyamal Babu said that animals and birds will enjoy happiness in his hotel just like human father’s hotel. Without working, the food will also match with the chat with friends.

He also said that he could not afford to give a very expensive gift to his wife on her wedding anniversary. He has opened this fancy hotel to make his wife happy and to make a living in extreme pressure. He said, this time the wedding anniversary has three legs. His wife Manika said that she always supported her husband’s work shoulder to shoulder.

The most interesting thing is that Shyamal has opened this hotel in his father-in-law’s house. Meanwhile, crows, dogs and even Hanuman’s party have formed a strong base by getting food at ‘Father’s Hotel’ without any hindrance. Many people are laughing when they see this incident of Shyamal, again starting from netizens, his colleagues are also giving him courage by praising him.