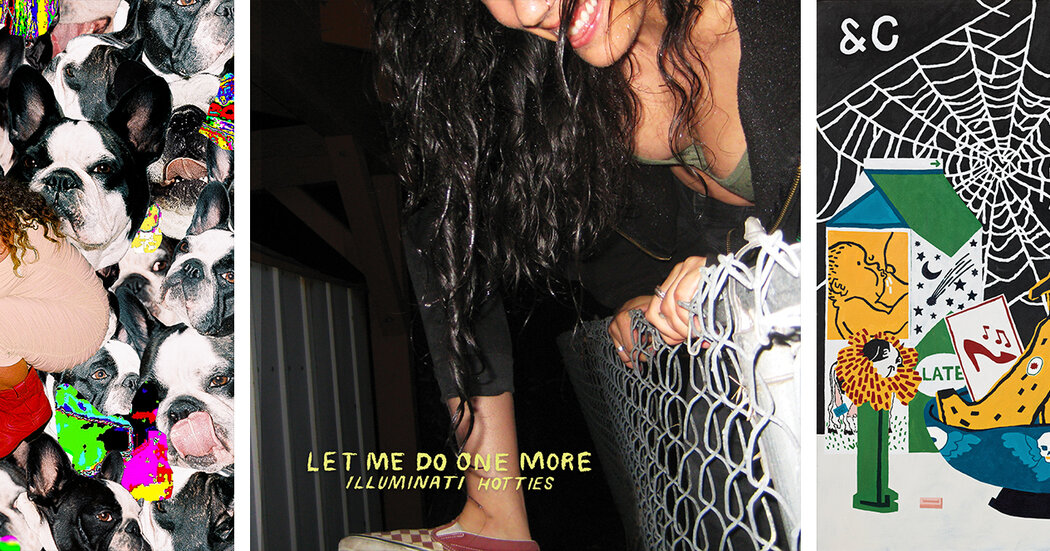 At last, the music industry is — sort of? kind of? maybe? — beginning its post-2020 reawakening. Bands that had been waiting to release new albums until they could realistically envision touring them are now tentatively re-emerging from extended hiatuses. Rising stars whose ascents were delayed by the pandemic are finally lifting off. After a long fallow period, this fall’s album-release harvest is once again looking abundant.

One group making a welcome return also happens to be one of New York City’s most vibrant and consistently interesting active rock bands, Parquet Courts, which will release its sixth album, “Sympathy for Life,” via Rough Trade Records on Oct. 20. Following up its excellent and eclectic 2018 record “Wide Awake!,” which was produced by Danger Mouse, “Sympathy” continues the post-punk-leaning band’s flirtation with funk grooves and danceable jams. (This album’s producer, Rodaidh McDonald, used to host Italo-disco nights on London’s club circuit.)

But as ever, Parquet Courts’ music is propelled by the tension between the head and the hips, with the itchy lyricism of the vocalists Andrew Savage and Austin Brown providing a counterpoint to Sean Yeaton and Max Savage’s buoyant rhythm section. “How many ways of feeling lousy have I found?” Andrew Savage wonders on the opening track, “Walking at a Downtown Pace.” He sounds as kinetic but prickly as a millennial David Byrne, while the music tries its best to cheer him up.

Always astute observers of the depersonalization of modern life, Parquet Courts on “Sympathy” raises an eyebrow at such ubiquitous conveniences as one-touch food delivery apps and household appliances that speak soothingly, “like a mother’s voice.” (Siri, can you set my alarm clock for noon tomorrow?) But the band still ultimately finds a hard-earned optimism in both the strange experience of being human and newly treasured delights like “the smile on an unmasked friend.” Ten years into its career, “Sympathy” is proof that Parquet Courts is still finding new digital-era crazes to skewer and new ways to evolve its sound.

Over on the opposite coast, an artist finally ready for her breakout moment is the 25-year-old California-based star-in-waiting Remi Wolf, a colorful funk-pop phenom with a soaring voice and personality to spare. Her debut album, “Juno” (out Oct. 15 on Island Records and named after her beloved dog), is eclectic, catchy and relentlessly unpredictable. You never quite know what’s going to come out of Wolf’s mouth next — “ain’t no Chuck E. Cheese in Los Feliz,” for one — and whether it will be rapped, crooned or belted to the rafters in a voice that got her all the way to Hollywood on the 13th season of “American Idol.”

Wolf’s hyperactive pop combines the vivid imagination of Tierra Whack with Jamiroquai’s slick, Y2K-era soul (and penchant for head-turning hats). But don’t let Wolf’s cartoonish aesthetic fool you: The songs on “Juno” plumb some serious depths. The album’s wrenching closer, “Street You Live On,” catalogs the damage of a never-ending breakup, while the single “Liquor Store” enumerates all of the insecurities that came to the surface when, during the pandemic, Wolf checked herself into rehab and got sober. It’s a testament to her strong sense of self, though, that even the darkest moments of “Juno” come alive with quirky humor. As she memorably puts it on the spirited single “Quiet on Set”: “I’m cracked the surface, crème brûlée.”

Another endlessly quotable West Coast firebrand with a killer album on the way is Sarah Tudzin, the multitalented Los Angeles musician behind the outrageously named project Illuminati Hotties. Tudzin is, in her day job, a Berklee-trained recording engineer and producer, and the music she released as Illuminati Hotties was initially supposed to be a kind of calling card for her technical prowess. Unlike some of the more reserved folks on the other side of the mixing board, though, Tudzin proved to be an exuberantly charismatic frontperson — check out the video for her catchy summertime single “Pool Hopping” — and her 2018 debut “Kiss Yr Frenemies” earned the devotion of a cult audience of fans she came to affectionately call “little shredders.”

The little shredders’ ranks are likely about to grow: Illuminati Hotties’ wonderful second album “Let Me Do One More” (out on Oct. 1 via Tudzin’s own imprint, Snack Shack Tracks) is the fullest realization yet of her idiosyncratic vision. These songs swing with ease between genres and moods, sometimes moving from hilarious to heartbreaking in a single line: “I went to the party to suck on air from people having fun,” Tudzin sighs on one guitar-driven slow burner. Blasts of high-octane hardcore interrupt dreamy surf-pop reveries — the Ramones are as much of a touchstone as the Ronettes — but somehow Tudzin holds all the chaos together through the sheer force of her personality. (To describe her all-over-the-place sound, she had to coin a somewhat oxymoronic phrase: “tenderpunk.”)

“Let Me Do One More” also represents Tudzin breaking free from her former label, the beleaguered indie Tiny Engines, for which she rush-released a 2020 mixtape to complete her contract. With the arrival of her long-delayed sophomore release, she’s implying something that resonates for plenty of other artists who are finally releasing records this fall: This is the one you’ve been waiting for.