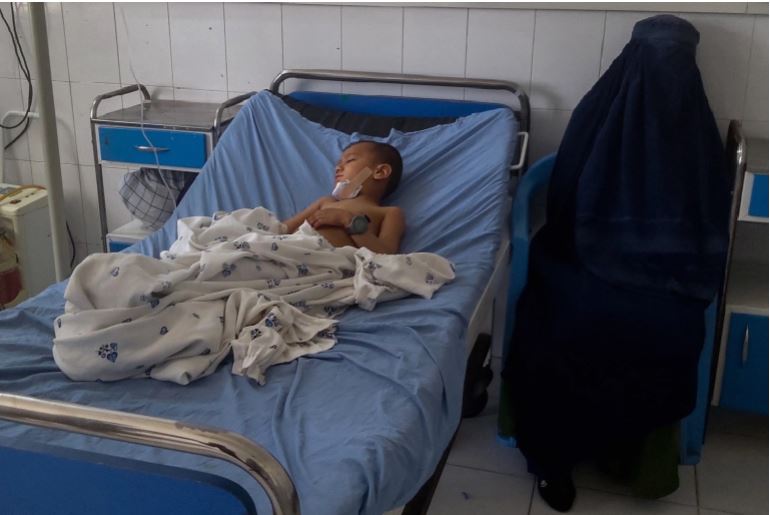 An explosion tore through a mosque near the northern Afghan city of Kunduz on Friday killing at least 33 people and wounding dozens of others.

“The blast occurred at a mosque in Imam Sahib district of Kunduz killing 33 civilians including children,” Information Minister Zabihullah Mujahid said on Twitter, adding another 43 people were wounded.

We condemn this crime … and express our deepest condolences to the victims,” said Mujahid.

Friday’s bombing is the latest in a series of deadly attacks across Afghanistan. Mujahid called the perpetrator’s of the Kunduz attack “seditionists and evil elements”.

Images posted to social media – which could not be immediately verified – showed holes blown through the walls of the mosque, popular with Sufis in the Imam Sahib district, north of Kunduz city.

An overview of how food shortages in Afghanistan have gotten worse since 2018.

It was not clear who was behind the attack, which came after several blasts claimed by the armed group ISIL (ISIS) rocked Afghanistan, including one in Kunduz and another on a Shia mosque in Mazar-i-Sharif, on Thursday.

Armed groups such as ISIL bear a deep hatred for Sufis who they view as heretics.

“The sight at the mosque was horrifying. All those who were worshipping inside the mosque were either injured or killed,” Mohammad Esah, a shopkeeper who helped ferry victims to the district hospital, told AFP news agency.

Taliban security challenge
Friday’s blast was one of the biggest attacks since the Taliban seized power in August last year. The Taliban has been battling an ISIL affiliate known as Islamic State in Khorasan Province, which is proving to be an intractable security challenge.

In October, a suicide bombing at a Shia mosque, also in Kunduz, killed at least 55 people and wounded scores – an attack also claimed by ISIL.

ISIL is a Sunni group like the Taliban but the two are bitter rivals. The biggest ideological difference between the two is that the Taliban sought only an Afghanistan free of foreign forces, whereas ISIL wants an Islamic caliphate.

Taliban officials insist their forces have defeated ISIL, but analysts say the group is a key security challenge.

Obaidullah Baheer, a lecturer from the American University of Afghanistan, told Al Jazeera the Taliban needs to get the security situation under control.

“The international community and the Taliban really need to sit down together and make sure the state isn’t failing and there’s some sort of economy. Because a vacuum in Afghanistan, a security situation in Afghanistan, is going to always spill over into the region and the globe as a whole,” said Baheer.

“Since the Taliban took power, the only achievement that they are proud of is the improvement in security,” Hekmat said. “If that is not sustained and if they fail to restrain ISIL, then they will also be a failure like the previous government.”

Shia Afghans, who are mostly from the Hazara community, make up between 10-20 percent of Afghanistan’s population of 38 million.

Baheer said an important factor that must be addressed is a disarmament campaign launched by the Taliban in Afghanistan.

“Minority groups such as the Hazara used to maintain their own security when threats were high against them to complement the government’s efforts. And unfortunately, now that they’ve been disarmed, they can’t even do that,” he said.

The deadliest of three bombings on Thursday exploded inside a Shia mosque in northern Mazar-i-Sharif with at least 12 people killed and as many as 40 wounded.

Earlier Thursday, a roadside bomb exploded near a boys school in the Afghan capital of Kabul, injuring two children in the city’s predominately Shia neighbourhood of Dasht-e-Barchi. A third bomb in Kunduz wounded 11 mechanics working for the country’s Taliban rulers.