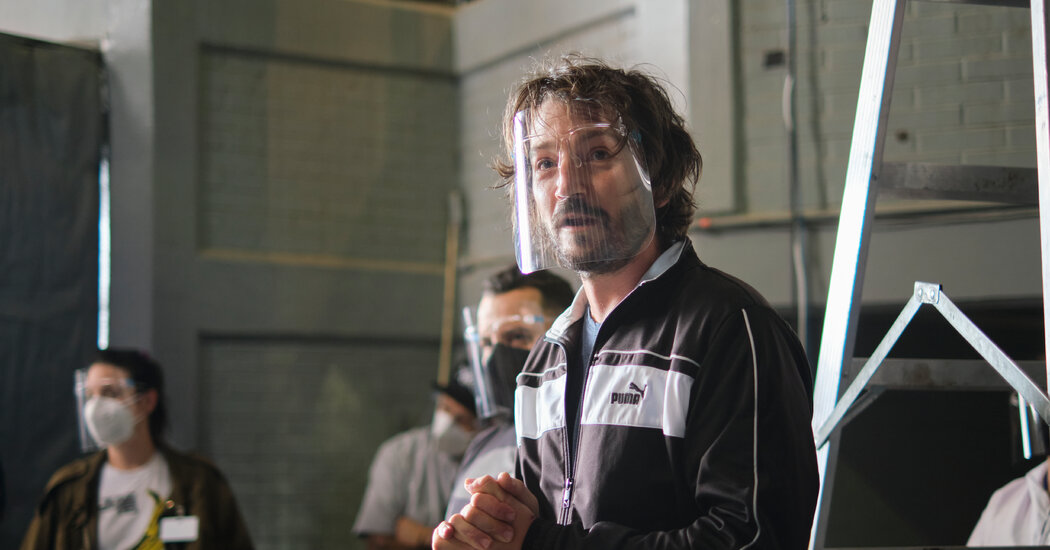 This interview contains spoilers for “Todo Va a Estar Bien.”

Diego Luna’s new Spanish-language Netflix series “Everything Will Be Fine” (“Todo Va a Estar Bien”) follows in the well-worn grooves of a traditional romantic or family drama — until it doesn’t. Sharply and decisively, Luna jerks the wheel toward a more progressive vision, unbound by tradition or institution.

“Covid confronted us with the idea of: Are you around the people you need to be around?” Luna, who created, directed and oversaw the series, said in a video interview from London last week. “Because this is the moment to do it.”

“Rethinking” is one way to put it. The show, which debuted last week and is Luna’s first time directing and showrunning a TV series — follows a small nuclear family in Mexico City as two parents (played by Flavio Medina and Lucía Uribe) struggle to comfort their young daughter, Andrea (Isabella Vázquez Morales), as their marriage falls apart. The father, Ruy, who works at a radio station, gets called out on the air for sexual improprieties. For his wife, Julia, that’s the last straw. While she and Ruy are separated, she becomes romantically involved with Andrea’s dentist, Fausto (Pierre Louis).

But things really take a turn in Episode 7 when Andrea runs away from home, upset by her parents’ uncoupling. Julia, Ruy and Fausto are forced to work together to find her. That’s when pressure boils over into passion, resulting in a three-way sex scene not unlike the one in “Y Tu Mamá También,” the 2001 film by Alfonso Cuarón that gave Luna his breakout acting role.

And just like that, the family dynamic shifts. In the final episode, after the Covid-19 pandemic arrives in full force, the characters break into song. “We all have a mother; we all have a father,” Andrea sings. “And we all also have someone who cares about us.” Her new family unit has broken the mold — with an arrangement that, for them, feels healthier and happier.

“We shouldn’t be carrying the expectations of anyone else when we’re talking about something so personal, like creating our own family,” Luna said. “And we carry the expectations of so many generations and social pressure that it almost becomes, then, impossible to be yourself.”

Between drags from his cigarette, Luna talked about the directing bug, how Covid made us think and what it means to say goodbye. These are edited excerpts from the conversation.

Were you itching to get back into directing after “Mr. Pig” in 2016?

Every movie I’ve done as a director, it has come in a moment where there’s no doubt I have to tell a story. My first film [“Abel”] was about the kind of parent I didn’t want to be. And it was when my son was born. The second movie [“César Chávez”] was about me moving to Los Angeles, and I wanted to tell a story about a Mexican American that I could tell my kids, because my son was born in the States. And then I did that movie [“Mr. Pig”], when I was just thinking about my relation with my father. But it took me time to find the new story to do.

When Covid arrived, everything stopped. And I didn’t know when I was going to be back on set shooting anything as an actor. And I remember telling everyone in the company: “This is the moment. This is it. I’ll shoot it from beginning to end, I’ll direct the whole thing. And we’ll manage to do something now that everything has stopped. We’ll find a way.” The title helped us a lot: “Everything Will Be Fine,” don’t worry, we’ll find a way.

How did you decide to include the Covid-19 pandemic?

The story already kind of responded to the main question I think Covid brought to us, which is: Are you ready to change every dynamic, everything you think you need? You might have to rethink about it. So it was easy to include the idea of Covid because I think it was already responding to that big question that Covid brought to us.

So it’s not just Covid. It’s the political polarization we’re living today, how difficult it is to find a common ground with others, how easy it is to feel so left behind with all the changes happening in front of us — in terms of the relation with our own demons, our masculinity and our own machismo, the violence that we’ve normalized, how little respect runs all of our relations.

You encapsulated that idea well in Ruy’s character. He does almost a complete 180: He goes from absolute machismo to volunteering to take sexual harassment trainings. How did that arc develop?

It’s what we hope we can achieve. And when I say “we,” I might be talking about most of the men involved in this project. Definitely, we have to confront ourselves with our own masculinity.

It’s about raising questions, being able to confront ourselves and question ourselves. I don’t think we pretend to give you an answer, because we don’t have it ourselves. But we have to be ready to go into this journey. Otherwise, we’re going to be just left behind.

It seems like this is something you’ve been chewing on for a while. Does it feel more urgent to you at this moment to talk about these themes: modern family, the perfect relationship, gender roles?

Yes, it does. I think we grow up with this heavy weight on our shoulders of making idyllic and impossible relations happen. And no one teaches us how to say goodbye. Even though it’s one thing we know might happen, sooner or later. There is no way things won’t end, there is nothing forever. That doesn’t exist. So why not be ready to say goodbye as much as we are ready to accept new things in our lives? And we’re not.

There is a sense of failure when things end — instead of a sense of achievement, of things that you will keep forever, that will make you better and prepare you better for what’s to come. Nothing can be born unless you learn to let go. So why not invest a little bit of our time into understanding: How are we going to say — in the most lovable and respectful way — goodbye? And that, to me, is what this story’s about.

Why are farewells and separations such potent themes for you?

Well, because I grew up in a very interesting equation, where I heard the sentence “Everything will be fine” over and over and over. My mom died when I was 2 years old. So my father was father and mother at the same time. I was there when my father tried many times to have other relations. And I had to learn through his experience that nothing is forever.

And then one day, I decided to be a parent. And I don’t think there’s anything more important in my life than that idea of what parent I want to be, what father I can be. And everything, since I got kids, is driven by that: by the idea of what example I want to leave. It is going to have such a huge impact on these two lovely creatures who are out there trying to define and build their own experience.

So I can’t think about anything else. And if I think about directing, there is nothing so personal and so challenging. I just want to make sure it responds to what matters to me.