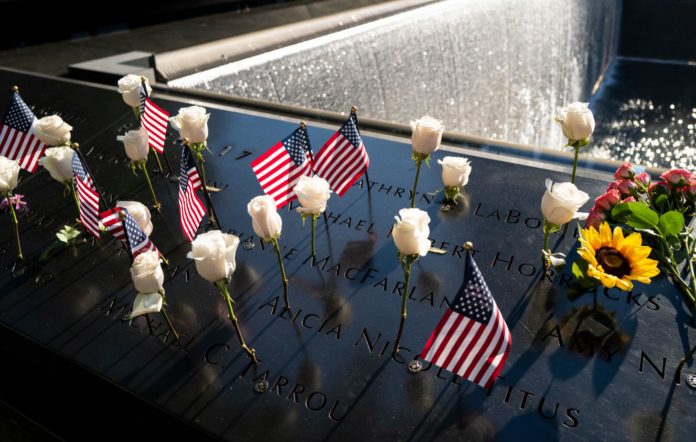 Stars from the world of entertainment have been paying tribute to the victims of 9/11 on the 20th anniversary of the US terror attacks.

Two decades ago, hijackers seized three passenger planes and crashed them into New York’s World Trade Center and the Pentagon in Washington DC. A fourth hijacked plane, believed to be intended for the US Capitol, crashed into a field in Pennsylvania due to the heroic efforts of its passengers. The attacks killed nearly 3,000 lives.

This morning (September 11), families of the victims and a number of high-profile figures, including US president Joe Biden and former presidents Barack Obama and Bill Clinton, gathered at the 9/11 memorial plaza in New York to mark the 20th anniversary of the attacks.

Also in attendance was Bruce Springsteen, who delivered a surprise acoustic performance of ‘I’ll See You in My Dreams’, a song taken from his 2020 album, ‘Letter To You’. “May God bless our fallen brothers and sisters, their families, their friends and their loved ones,” The Boss said before his performance.

A number of other stars have taken to social media to pay tribute to the victims.

“Today we mourn the loss of life, and the loss of time,” John Mayer said, sharing a post on Instagram. “As we commune with the memories of our former selves and remember those whose lives were lost on 9/11 and in the ensuing years, my hope is that we might retrieve something good in us we hadn’t realized we’d left behind.”

Jane’s Addiction frontman Perry Farrell wrote: “Yes, today is 911 a most somber day for these United States. Never forget the time this country was attacked on our own soil. Memorialize the tragedy, so that generation upon generation can gain wisdom, understanding, and knowledge. Justice America, justice must we always pursue.”

Paying tribute to the emergency services and first responders who put their lives at risk to help on the ground at the World Trade Center, Mr. T tweeted: “On this 20th anniversary of 9/11, let us not Forget to Honor those First Responders. They were there Digging, Searching, and Crawling through toxic debris inhaling cancer-causing dust while trying to find Survivors. God Bless Them!”

Comedian Michael Blackson recalled losing a friend and fellow comic who was working security in one of the towers. “I remember this day like it was yesterday, I was working for U.S. Airways at the Philadelphia airport when we got the news, then we watched the rest on tv,” he said. “We lost a comedian named Dog Face who worked as security in one of the towers, he made it out then went back in to help save people and a few days later all they found was his teeth and he left behind 2 beautiful daughters smh. May they all Rest In Peace.”

Howie of the Backstreet Boys also paid tribute to someone the band lost in during 9/11. “Rembering all of those we lost as a result of 9/11,” he tweeted. “Daniel Lee, a member of the BSB family, worked with me every night under the stage on the Black and Blue Tour. He was aboard AA flight 11.”