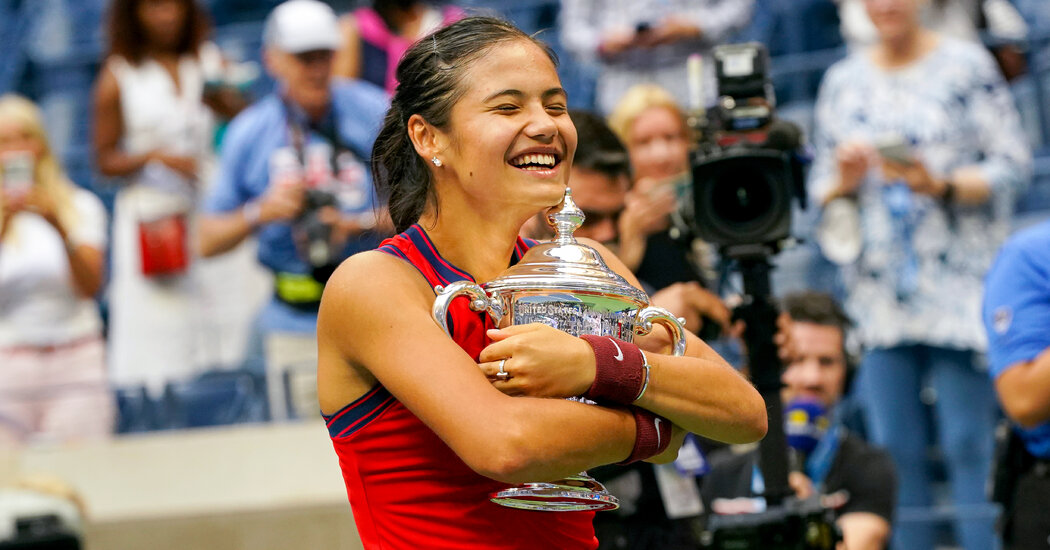 Emma Raducanu, the 18-year-old British phenom, completed her shocking run through the U.S. Open with a straight-sets victory over Leylah Fernandez of Canada on Saturday that will surely go down as one of the great underdog journeys in the history of sports.

And she did it the way she had handled every other match she played in New York, where she did not lose a set in 10 matches, a remarkable 20-set streak and another feat that is unlikely to be repeated anytime soon. Saturday’s scoreline was a clean 6-4, 6-3.

Raducanu’s game, a rare mix of power and precision, proved too much for Fernandez, a quick and fearless counterpuncher who possesses deceptive power as well. On Saturday afternoon, though, in front of a packed Arthur Ashe Stadium where the crowd blanketed both players with love, Fernandez simply ran out of points and punches, as Raducanu’s laserlike shots to the deepest parts of the court kept landing just beyond the Canadian teenager’s reach.

After a tight first set, during which both players had chances to grab the early lead, Raducanu surged toward the finish line in the sixth game of the second set, breaking Fernandez’s serve by blocking what looked like a sure putaway with a screeching forehand down the line.

Ever the fighter, Fernandez saved two match points as she served at 2-5 to keep the match going. In the next game, she sent Raducanu sprawling to the ground, as she chased Fernandez’s shot deep to the corner. But Raducanu settled herself during a medical timeout to get a cut on her leg bandaged, and five points later finished off the match with an ace. She collapsed on the court as the stadium exploded.

“I was just praying not for a double-fault,” Raducanu would say of the finish, just before she became the unlikeliest lifter of a Grand Slam trophy that tennis has ever seen.

Queen Elizabeth even chimed in, sending out a statement from Balmoral Castle praising Raducanu for “a remarkable achievement at such a young age.”

This was the rarest of finals, a contest between two players known only to the most faithful of tennis fans two weeks ago.

They had played once before, in the Wimbledon junior tournament in 2018. Raducanu won that match in straight sets as well. But two years ago, Raducanu was pretty sure her path would lead to college and a career in finance. She took her entrance exams earlier this year, around the time that she was playing in the lower tier tournaments that earned her a wild-card entry into Wimbledon, where she made her Grand Slam debut. This was her first summer of top-level competition.

Fernandez, who turned 19 this week and is ranked 73rd, was until a few days ago known as little more than a scrappy, undersized battler. Few had predicted greatness for her. Some years back, a teacher told her to give up the game because she would never amount to anything.

For tennis, their stunning journeys to the final could not have come at a better time. The sport had landed in an awkward spot in the weeks leading up to this U.S. Open. Novak Djokovic arrived in New York trying to accomplish the rarest of tennis feats, winning all four Grand Slam tournaments in a calendar year, but most of the game’s biggest stars had fallen off the map. Roger Federer and Rafael Nadal announced they were skipping the tournament because of injuries, as did Serena and Venus Williams.

Then, on the first Friday night of the tournament, Naomi Osaka, the reigning champion and the biggest new star in tennis, lost to Fernandez in three sets and announced that she planned to leave the sport indefinitely. The game, she said, was no longer bringing her joy. Osaka spoke in the spring of battling depression since winning her first Grand Slam title at the U.S. Open in 2018.

Once more, the dark side of the sport, a lonely, pressure-filled crucible often endured by young talents not ready to handle it, had burst into the open.

Then along came Raducanu and Fernandez, two bright lights whose lineages span four continents. They delighted crowds with rousing victories and unique styles. After every win, Raducanu said she could not believe what had just happened, while Fernandez said how strongly she believed she could not lose, even if she had no right to think that way as she plowed through one highly ranked player after the next.

Here was something all too rare on the tennis court — unadulterated joy from athletes playing loose and free, without any baggage from missed opportunities of the past, or the pressure that comes with success and the weight of expectations.

The tired cliché in sports is that it is often a shame that one player has to lose. Given where Raducanu and Fernandez were just two weeks ago, as they emerged to captivate the tennis world and millions in their countries and elsewhere who rarely pay attention to the sport, it was simply impossible that either of them — or tennis itself — would walk away from this experience having not won.

There was a moment late in the match Saturday when, the crowd of some 23,000 simultaneously chanted, “Lets’ Go Emma!” and “Let’s Go Leylah!” with some fans alternating names with each round. When does that happen?

They had taken such different routes to reach this stage, with Raducanu blazing through her solid but not quite spectacular opponents, and Fernandez surviving all those near-death experiences against Osaka, and then the three-time Grand Slam champion Angelique Kerber, and then Elina Svitolina and Aryna Sabalenka, two of the top five players in the world.

Coming into the final, Raducanu spoke of treating it like just another match. Fernandez was not shy about talking about the opportunity that was before her. Her father, Jorge, who is her coach, said Saturday that he would talk to his daughter about how this was not just another match.

“It’s a finals, all right,” Jorge Fernandez said in a teleconference from Florida because he did not accompany his daughter to the tournament, preferring that her mother, sister and fitness coach attend instead. “Let’s sweat it all out. Let’s make sure that no matter how it finishes, there are no regrets because we won’t get another crack at this again, if we’re fantastic, for another year.”

As it turned out, the bigger winner turned out to be Raducanu, who got over her early jitters to grab the first lead at 2-0, only to see Fernandez quickly scramble back and knot the set at two games each. From there, the match settled into a tense rhythm with long games and long points.

With Fernandez serving at 4-5, Raducanu tightened the vise with two killer crosscourt backhands to secure two set points. Fernandez would save those, as well as a third, but on the fourth one Raducanu fired a forehand down the line to take her 19th consecutive set.

“I made too many mistakes in the crucial moments,” Fernandez said later. “This loss, I’m going to carry it for a very long time.”

In the second set Fernandez was wobbly in the first points, then surged to a lead, then fell back, and it looked as if Raducanu was going to roll through, but each time Fernandez teetered on the edge, she came up with another scorching forehand, or stretched for a lob to extend the rally and get Raducanu to make one more untimely error. She would make 25 on the day. It happens when you are 18 and playing in the final of a Grand Slam for the first time, and it’s only your second Grand Slam.

But then Raducanu broke through in the pivotal sixth game, and the only question was whether her teenage nerves would be steely enough to handle the pressure of closing out the tournament.

At first, they absolutely were as she raced to get two match points on Fernandez’s serve, but the error bug bit her again and on they went to one of the strangest final games a Grand Slam final has ever seen, and a deuce point that left blood dripping down Raducanu’s leg.

It was a moment that might have panicked the most veteran of players, or caused one as inexperienced as Raducanu to try to rush to the finish. Two months ago, during what looked to everyone like a panic attack, she quit in the middle of her fourth round match at Wimbledon, telling the trainers she was having trouble breathing.

Instead, as she faced break point and a chance for Fernandez to get the set back on serve, she took a slow walk to her chair and called for the trainer. There, she got the bandage on her leg, absorbed what was unfolding and let it pass. With Fernandez questioning a tournament official if the injury really required a stoppage in play, Raducanu cooled herself with the air conditioning tube then walked back onto the court a few minutes later ready to meet her moment.

When it was finished, Raducanu said something that so many have said before her, but no one ever truly believed, even those who have said it.

“Every single player in the women’s draw has a shot at winning any tournament,” she said.

After Saturday, no one could argue with her.