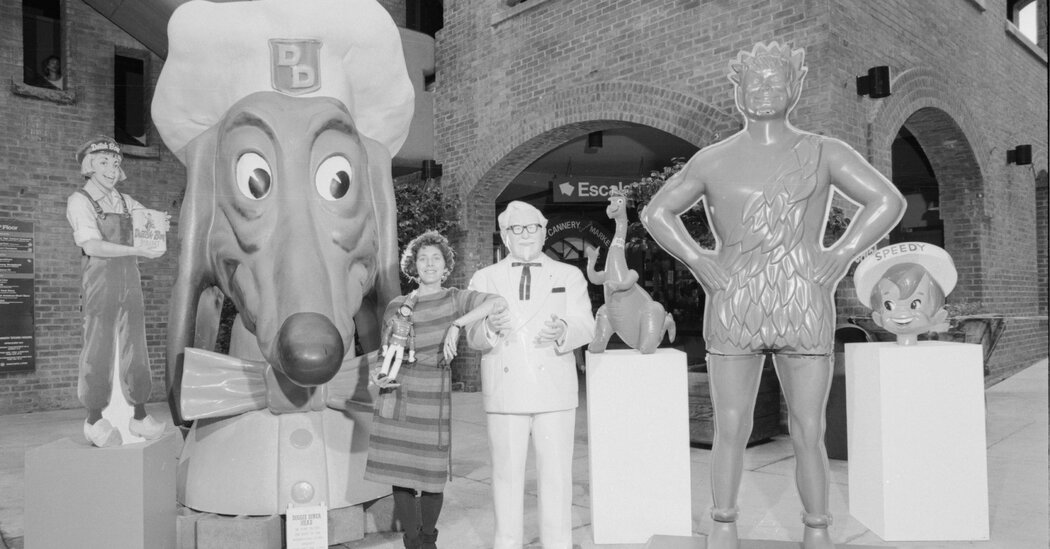 Ellen Havre Weis, who helped create the popular Museum of Modern Mythology in San Francisco, which was based on the notion that the advertising characters who exist in modern life — the Jolly Green Giant, Colonel Sanders, Mr. Peanut — populate a mythology in their own right, died on July 27 at her home in Altadena, Calif. She was 64.

The cause was brain cancer, her husband, Gordon Whiting, said.

Ms. Weis, a writer, founded the museum in 1982 with two collaborators. They initially found space for it in a warehouse in San Francisco before moving its 3,000-piece collection to Fisherman’s Wharf. It became a tourist draw before it was forced to close in 1989 because of the Loma Pietra earthquake, one of the most destructive in the city’s history. Ms. Weis was its executive director.

The museum appeared at first to be a collection of capitalist artifacts. A large figure of the Jolly Green Giant flanked Poppin’ Fresh, of Pillsbury fame, and they shared space with the corpulent Bibendum, better known as the Michelin Man.

But Ms. Weis’s intent was to link our conceptions of these pop-culture figures to the human need to mythologize; she asserted that our Fates, Furies and giants were not left behind in Greece or Egypt, but rather transposed to our own culture. The Jolly Green Giant was her selling point when describing the museum to its leadership and the public — he was, she said, a character straight out of “Jack and the Beanstalk.”

One of her favorite pieces in the museum was a plastic model of Elsie the Cow, the character used to sell dairy products in advertisements for the Borden Dairy Company, which later branched out into chemical products, including glue. Elsie then acquired a husband, Elmer, who sold the well-known white glue named after him. Their domestic squabbles formed the background of 20th-century ad campaigns selling Borden products. Mr. Whiting compared their dynamic to that of Hera and Zeus in Greek mythology, the archetypical contentious marriage.

“We’re not saying they’re deities,” Ms. Weis said of the collection in a 1988 interview with The New York Times. “But the same relationship holds. They will live beyond their generation because people revere their character by buying the product.”

The Museum of Modern Mythology was unusual in both its premise and the contents of its collection. Mr. Whiting said of the objects themselves: “They weren’t made for museums. They were made to sell stuff and then be tossed. They are literally ephemera, stuff that is temporal — here and then gone.” But Ms. Weis took that ephemera, and its effects, seriously.

The film critic Leonard Maltin, who sat on the museum’s board, said in an interview that Ms. Weis and the museum imbued the practice of collecting and archiving these objects with a unique academic focus. The museum, Mr. Maltin said, focused on putting advertising characters “on a pedestal in a way that no one else had even thought of.”

The board also included Joseph Campbell, the prominent scholar of mythology.

Ellen Havre Weis was born May 14, 1957, in Levittown, Pa., and grew up in Elkins Park, outside Philadelphia. Her mother, Aimee (LeVita) Weis, was a librarian for a community college, and her father, Henry Kraus Weis, was a product engineer.

Ms. Weis enrolled at the University of Iowa in 1975. While there, she began writing fiction with a group known as the Actualists, whose members included the poet Anselm Hollo. She dropped out a year shy of graduation to pursue writing, working at a small press and publishing fiction in literary publications like The North American Review.

She moved to San Francisco in 1982. There she worked with her boyfriend at the time, Matthew Cohen, an artist and graphic designer, and Jeff Errick, a graphic artist, to found the Museum of Modern Mythology.

The genesis for the idea came when Ms. Weis and Mr. Cohen were staying at a warehouse in the Mission District owned by Mr. Errick and Ed Polish, who ran a company making political buttons, campaign bumper stickers and other such items.

The warehouse contained Mr. Errick’s collection of advertising paraphernalia: hundreds of figurines of characters, many of them designed for supermarket or gas station displays. He lent around 500 artifacts to jump-start the museum, which was initially housed in the warehouse. It later moved to an upper floor of a nearly century-old building on Mission Street in downtown San Francisco.

Ms. Weis took inspiration from “Mythologies” (1957), a collection of essays by the French intellectual Ronald Barthes, which asserted that social values reflected archetypes and tropes from ancient myths.

Mickey McGowan, an artist who ran the Unknown Museum, another pop-culture repository in the Bay Area that featured myriad Monopoly games and other mass-produced household objects, said that entering the Museum of Modern Myth felt “like bowing down to the gods.” The life-size Colonel Sanders and his fiberglass companions dwarfed visitors, and the sheer volume of mass-culture objects forced them to confront these characters’ ubiquity in daily life.

The museum closed in 1989 after the Loma Prieta earthquake rendered its space unsafe, and its contents were put in storage. The founders looked, in vain, for an alternative space for the museum’s contents while also pursuing their careers, which for Ms. Weis included lecturing on advertising culture, consulting and other endeavors. Mr. Cohen died in 1994.

In addition to her work at the museum, Ms. Weis continued to write. In 2004 she and the photographer Kiran Singh published “Berkeley: The Life and Spirit of a Remarkable Town” (2004). She and Mr. Whiting also ran a public relations company that represented creative and media professionals in Berkeley. She later worked at Bay Nature Magazine.

Ms. Weis and Mr. Whiting were married in 1996. In addition to him, she is survived by their son, Benjamin; her mother, Aimee L. Weis; her sister, Margaret Chase; and her brother, Fred Weis.

In the weeks before Ms. Weis’s death, the Valley Relics Museum in Van Nuys, Calif., reached an agreement to take in the Museum of Modern Mythology’s complete archive, finally giving the Jolly Green Giant and Ms. Weis’s band of mythmakers a second life.