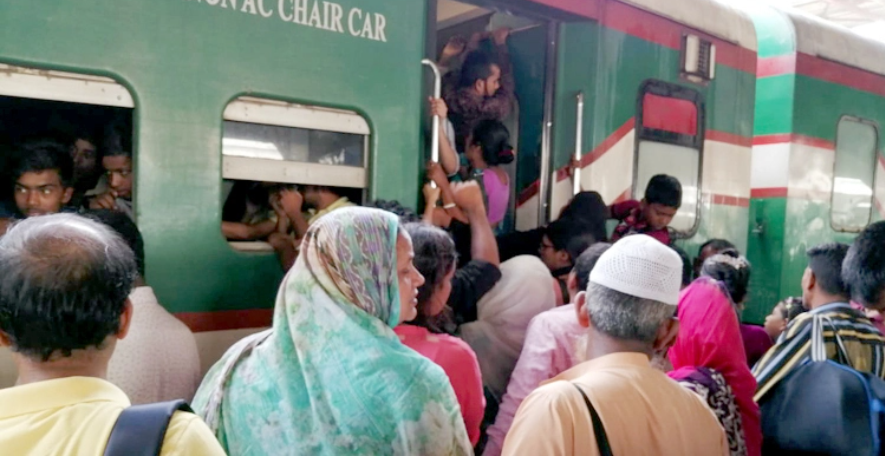 Residents of the capital have started returning home to celebrate Eid with their families and relatives. The official Eid procession has started on Wednesday (April 26) from 6:20 am. In the next few days, about 53,000 passengers will travel daily from Dhaka to different parts of the country. Of these, only intercity trains will have more than 26,000 seats.

The Eid procession was scheduled to start on Wednesday (April 26) at 6 am on the Rajshahi-bound Dhumketu Express train, but it was delayed. Half an hour later, the train was scheduled to leave at 8:30 am, but the train left Kamalapur railway station at 8:55 am. However, before that, the Eid Yatra officially started at 8:20 am by leaving the station of Sylhet-bound Parabat Express train.

Meanwhile, on the first train of the first day of Eid Yatra, homebound people have expressed their displeasure at such a delay. They say that if the start day is so late, these trains will not be able to reach their destination on time. This will disrupt the up-down schedule. Passengers will suffer.

Joynal Abedin, a passenger on Dhumketu Express, told Jago News that if a train is delayed by 1 minute, the up-down delay is 15 to 20 minutes. 55 minutes delay at the beginning of the comet, the rest of the time I do not know how to schedule.

Another passenger, Mitu Akhter, said the comet was scheduled to leave at 6 am. It was said that he would leave at 8:30. At 6:50 am, there is no name to leave the train yet. We relied on trains to avoid the suffering of the road, waiting day and night to collect tickets. Now the journey is also suffering.

Meanwhile, the Chilahati-bound Nilsagar Express is scheduled to leave at 6.40 am after leaving the Parapub Express. But the train did not reach any platform till 8 am. The 8 am train bound for Chittagong left from Sonar Bangla Express Platform No. 4. Kishoreganj-bound 11 Sindur Prabhati, Dewanganj-bound Teesta Express and Chittagong-bound Mahanagar Prabhati were seen standing on the platform at the right time after 8 am till the writing of this report.

However, the Khulna-bound Sundarbans Express was scheduled to leave the station at 8:15 am, but it left the station 30 minutes late at 8:45 am.

At Kamalapur railway station he talked to a Sylhet-bound passenger named Yarul Islam. He said that the biggest challenge in this year’s Eid Yatra was getting tickets. After receiving the ticket on April 23, the added joy of returning home was added. After getting the ticket with great difficulty, forgetting all the difficulties and leaving for home today.

Yarul said, this Eid, I waited in line in front of the counter at the station for 12 hours, spent time chatting and got the desired ticket. My campus (Dhaka College) is on vacation now. I will stay at home for some time. Just after a problem on campus, I will return to Dhaka after understanding the situation.

Ziaur, a passenger of Dhumketu Express, arrived at the station after eating sehri. He will go to Rajshahi. Speaking to Jago News, he said, every time I go to my village house in Kharkhari, Rajshahi on Eid. This time too I am leaving Dhaka to celebrate Eid with my family. To avoid suffering on the road, I took a day off in the office this time. I will return to Dhaka on the second day of Eid, InshaAllah.

The sale of advance train tickets has started from 8 am on Wednesday for the fifth day. Train tickets for May 1 are being sold on this day. There is a long line of ticket seekers at the station from Tuesday night to get advance tickets for May 1. Many of them have completed Iftar and Sehri in the station area. Many women also came before Sehri. Their goal is to get the May 1 ticket.

If Eid-ul-Fitr is celebrated on 3rd May, subject to the sighting of the moon, advance tickets for the 2nd May train will be sold on 27th April tomorrow. Return train tickets will be on sale from May 1 at the end of Eid Yatra. Railway authorities have decided to run six pairs of special trains for the convenience of this year’s Eid Yatra.